Cleopatra legendary jewellery
One of the most beautiful women of the ancient world, Great Queen of Egypt of a divine origin, unmatched mistress, was capable to bewitch any man – even if he is Caesar. The mysterious and attractive image of Cleopatra still holds many mysteries and charms for over two thousand years. Historians of antiquity, who observe the life of Cleopatra, are impressed by without doubt, magical abilities of this woman.
But if you carefully read the ancient texts, none of them call Egyptian queen – beauty. Instead, praised her sharp wit and determination, as well as an excellent education. Cleopatra knew seven languages ​​and even wrote philosophical treatises and writings on weights and measures. In addition, she was unsurpassed expert in the field of Women in the Arts – knew the secrets of the special preparation of cosmetic drugs (and poisons!), had mastered the art of dress and jewelry to choose. One of the portraits of Queen Cleopatra VII

In fact, it is the ability to present herself and talent of Cleopatra to create costume jewellery and unforgettable image later became a myth about her unrivaled beauty. Today we would call her a good stylist.

According to contemporaries, the queen never parted with ornaments. By changing them during the day, she even took a bath in jewelry. Their task was not only to decorate Cleopatra, they also served as amulets. In many traditional cultures a woman is still considered not dressed and not protected from evil spirits, if there are no rings, earrings, bracelets, hair ornaments and necklaces on her.

Interestingly, many legends of Cleopatra meantion jewelry of Egyptian queen. For example, a story about the precious pearl dissolved in vinegar, or the amazing amethyst, not allowing its mistress to get drunk at banquets.

Meanwhile, when we try to imagine the legendary queen, we inevitably recall the magnificent Hollywood movies. In fact, there are several films on the theme of Cleo, but two of them stole the show. They are “Caesar and Cleopatra” of 1945 with Vivien Leigh in the title role, and “Cleopatra” of 1963 with Elizabeth Taylor.

Following the myth of Cleopatra, for the role of queen chose the main beauties of Hollywood. Their costumes and decorations were fantastic luxury. Noteworthy, a movie with Elizabeth Taylor – still considered the most expensive staging in the history of cinema.

in fact, the decorations of film characters were not entirely fictional – costume designers tried to copy hats and costumes of Cleopatra, known from her portraits.

Taylor created the impressive image of Cleopatra on her Egyptian wardrobe (and especially the decorations). It took an army of artists, costume designers and decorators to create the fabulous outfit. Survived after filming “Cleopatra” Elizabeth Taylor costumes – exhibited for a long time, and not so long ago after the auction had gone to private collections. For example, here’s the fake headdress of Queen with a crown of snakes, sold at the auction for 100 000 dollars.

Estimated at auction for more than $ 3,000 headwear of Cleopatra in the form of a falcon, its wings stretched out. Skillfully made of gilded leather, and each feather – made by hand and secured in a special way with the help of gold wire that retains the shape of this unusual decorations.

For ‘Cleopatra’ of 1963 they commissioned the unusual belt in the form of a snake, designed to emphasize the shape of Elizabeth. The belt’s creator was the famous brand of vintage costume jewelry “Joseff of Hollywood”, whose main business was just the creation of jewelry for Hollywood historical films.

The role of Cleopatra was a milestone for Elizabeth Taylor. Although the actress has not received the “Oscar” for the film, and the very formulation of the fantastic budget nearly bankrupted the company “20th Century Fox”, without bringing the expected profits at the box office, it was this film adaptation that has created the most spectacular imaginary portrait of the great queen of Egypt.

By the way, the role of Cleopatra in this movie could play other actresses. In particular, Brigitte Bardot, Sophia Loren and Audrey Hepburn, and all the actresses said yes. And when, during the filming, Elizabeth Taylor was seriously ill, producers began to consider a new candidate for the lead role – Marilyn Monroe. Fortunately, Taylor was destined to remain in the history of cinema the most famous Cleopatra.

Thirty years later, Elizabeth Taylor will return Egyptian queen to the history of jewelry. She made her author’s collection of jewelry in the style of Cleopatra, created on request from “Avon”. At the turn of 1980-1990s Avon produced a limited series of luxury jewelry designs by famous designers of the time. And nowadays, this excellent standard of vintage jewelry covered with 24-carat gold, is the subject of hunting for collectors. Elizabeth Taylor has created all three objects in the Egyptian series – bracelet, ring and clips with pendants.

Owing a collection of magnificent jewels, Elizabeth knew its weight in gold and real gems. These bracelet and ring weigh exactly the same as would weigh such ornaments of pure gold.

The cape sold for 37,000 pounds — designed to look like the wings of a phoenix — helped the 1963 blockbuster win an Oscar for Best Costume Design. Taylor wore it in scenes where Cleopatra entered Rome and when she committed suicide with a snake bite. The woman, who bought the cape in 1970 from a costume shop never showed it to anyone. When she died her daughter put it up for sale: “When Elizabeth Taylor passed away I thought of the magnificent cape and realized it was time for it to find its way into the world.” 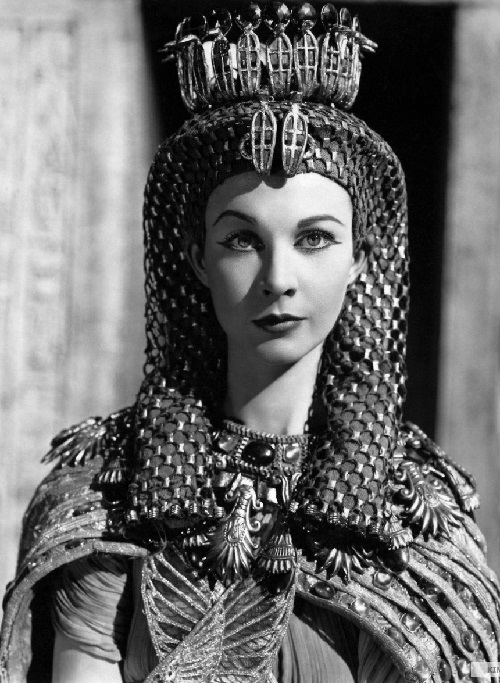 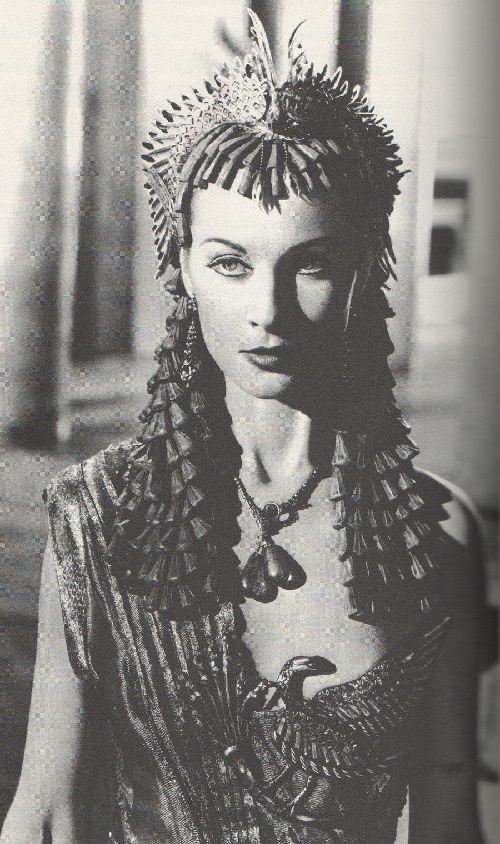 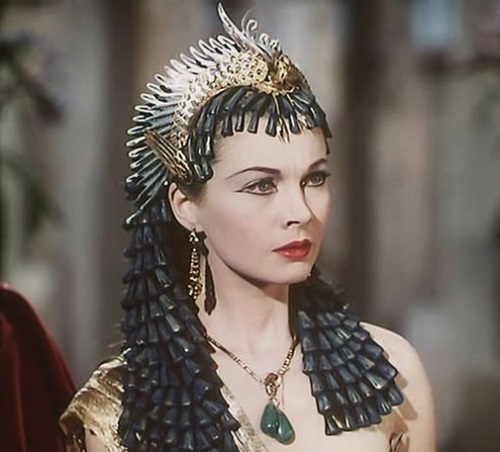 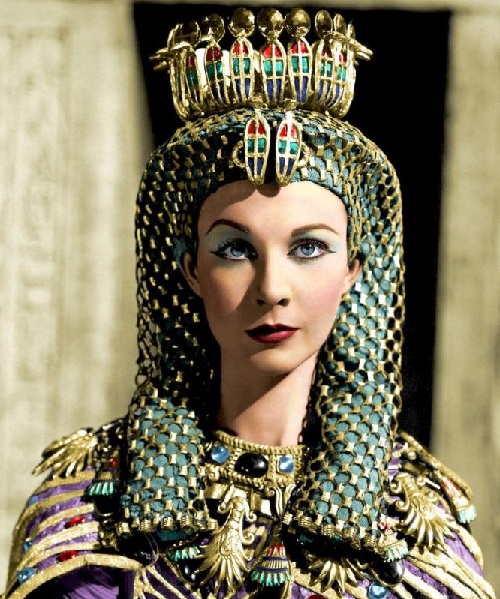 In this case, the source of inspiration was the headdress of other queen – Meritamon 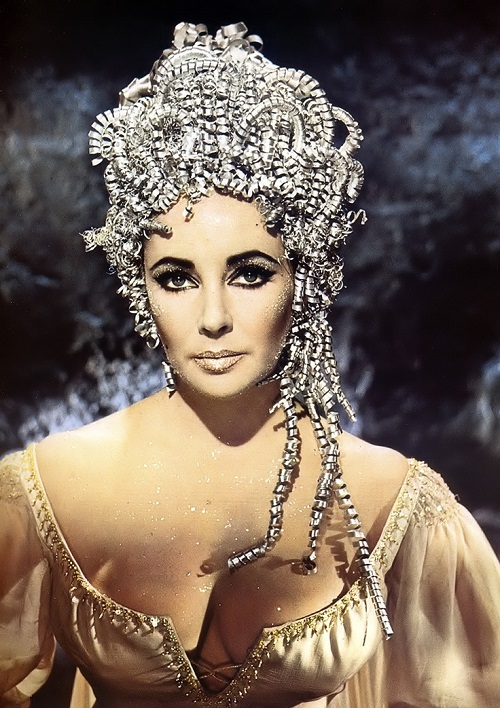 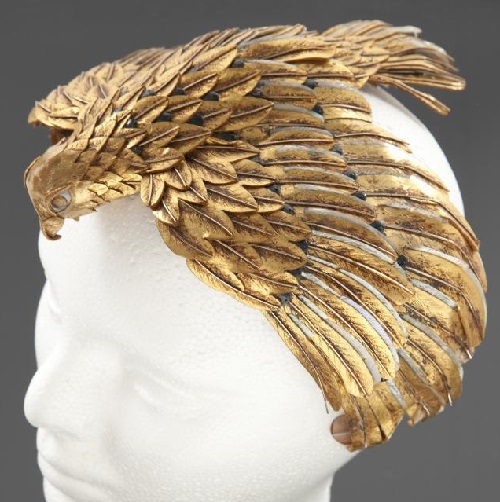 More than $ 3,000 estimated at auction for the headwear of Cleopatra in the form of a falcon, its wings stretched out 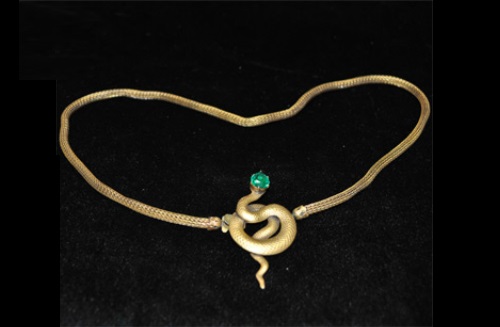 Belt in the form of a snake 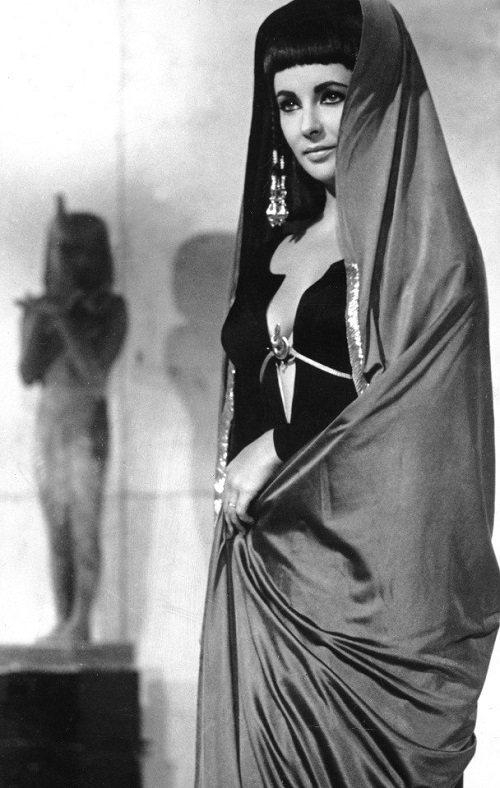 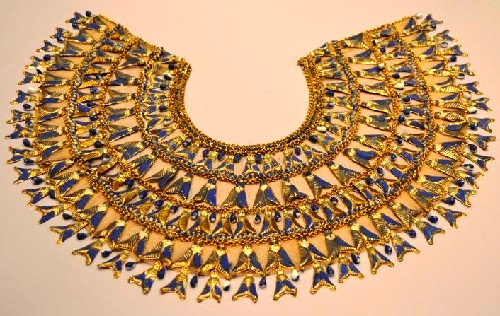 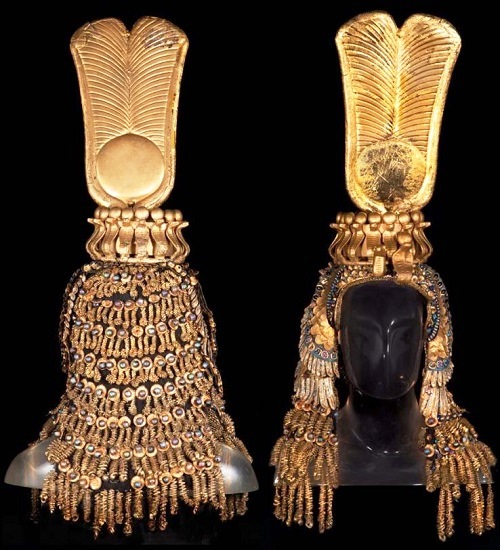 Queen headdress with a crown of snakes, sold at the auction for 100 000 dollars 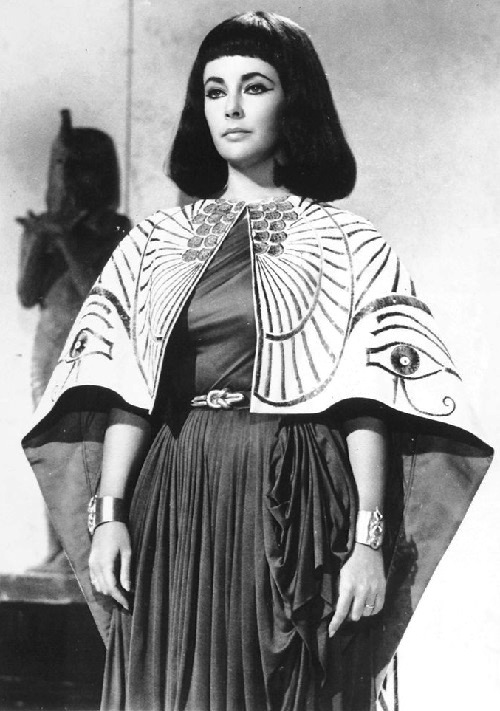 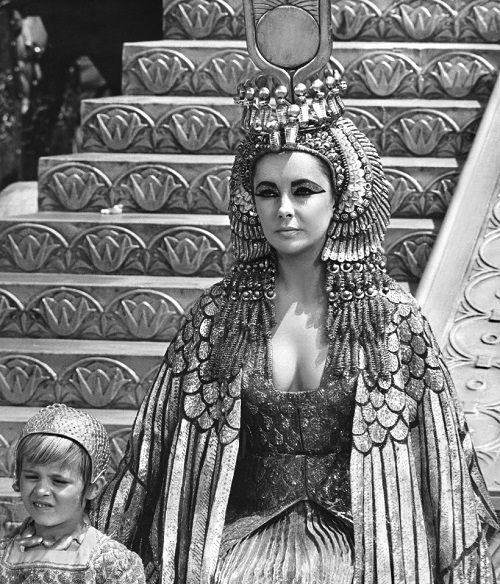 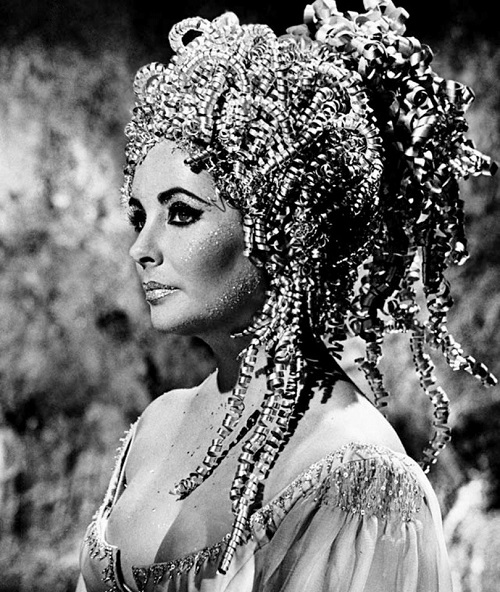 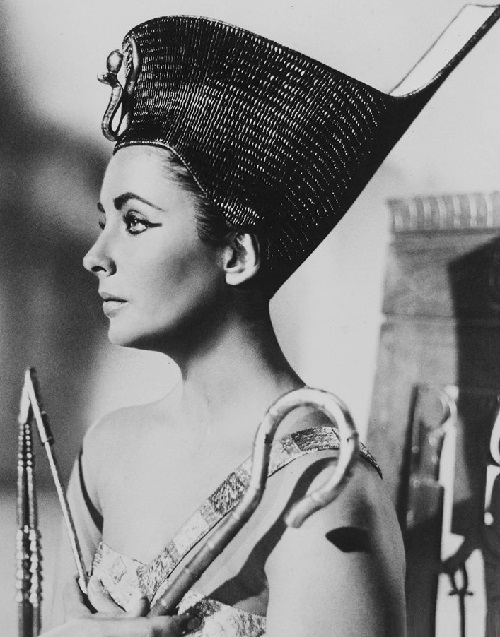 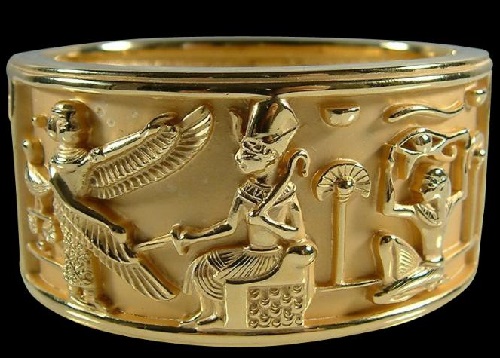 Bracelet created by Elizabeth Taylor on the grounds of Cleopatra 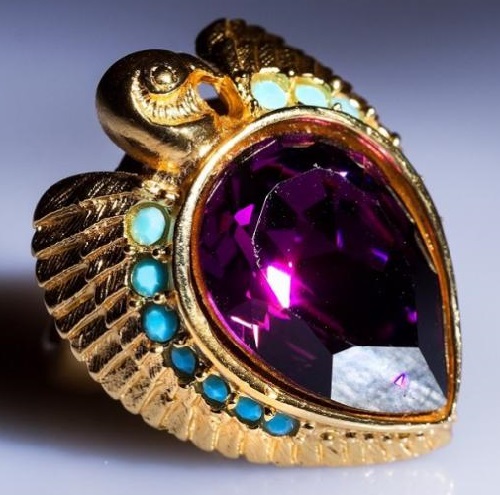 Ring created by Elizabeth Taylor on the grounds of Cleopatra 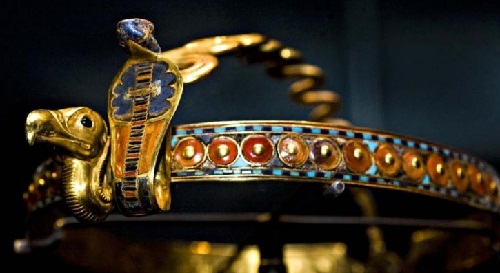 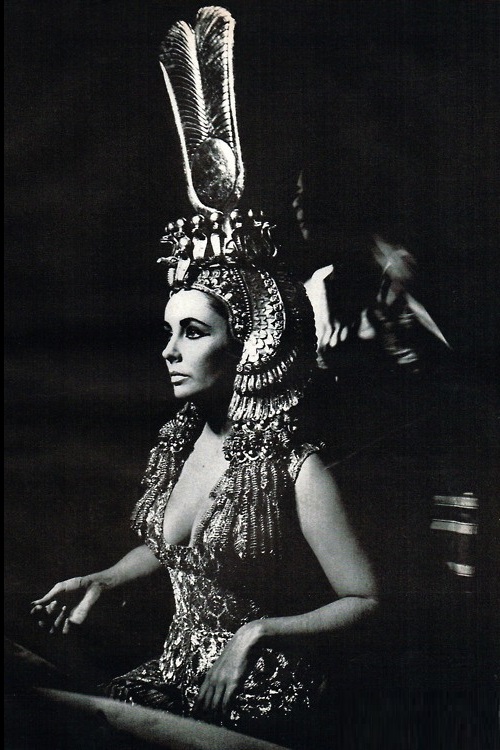 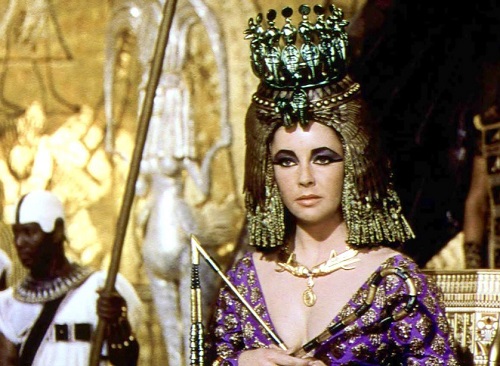 The one and only ‘Cleopatra’ in cinema, Elizabeth Taylor 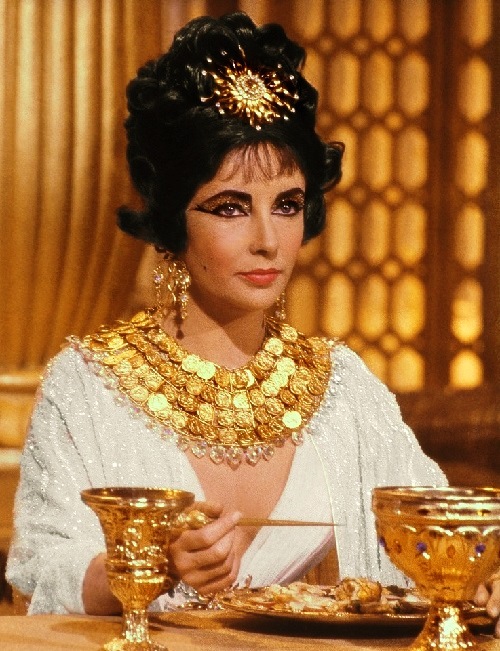 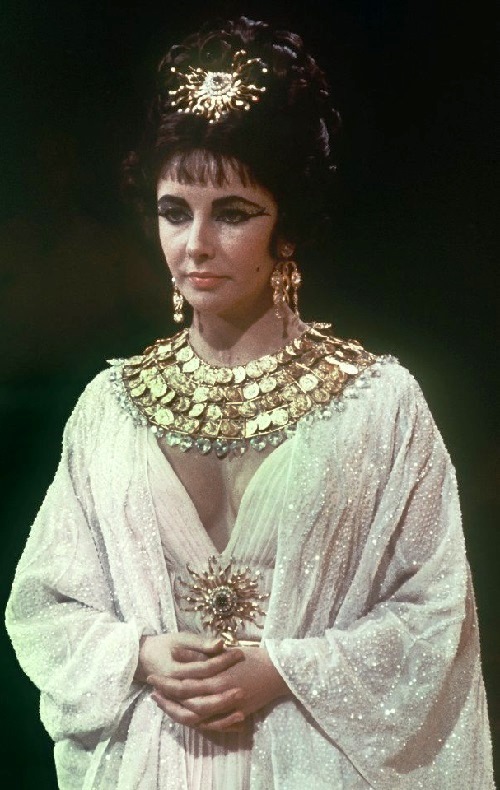 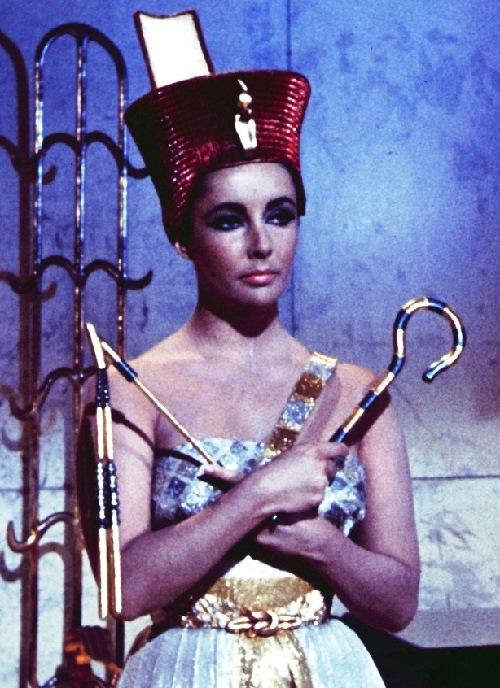 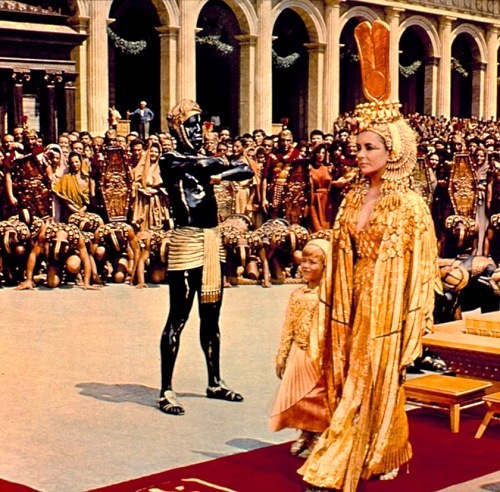