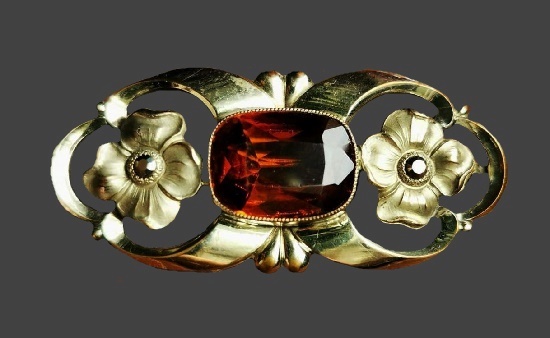 Kollmar Jourdan vintage costume jewelry
The history of the Kollmar & Jourdan jewelry company began in the jewelry capital of Germany, the city of Pforzheim, in 1885. Initially, the founders of the company Emil Kollmar and Wilhelm Jourdan focused on the production of watch cases, straps and jewelry with silver and gold plating. Also, they produced gold plated nickel chains, and later American double gold plated chains. The company expanded its production and became known both in Germany and throughout Europe and America. So, after fifteen years of successful work, in 1900, the company employed almost 400 workers. Traditionally, the craftsmen of the company marked the products with the initials KJ crossed by an arrow.
As a result of World War II, the factory was destroyed. However, a few years later it was restored and returned to its former glory, focusing on the production of jewelry. The company ceased to exist in 1975.
Handcrafted, high-quality gold and silver jewelry marked with KJ are now highly collectible.
END_OF_DOCUMENT_TOKEN_TO_BE_REPLACED 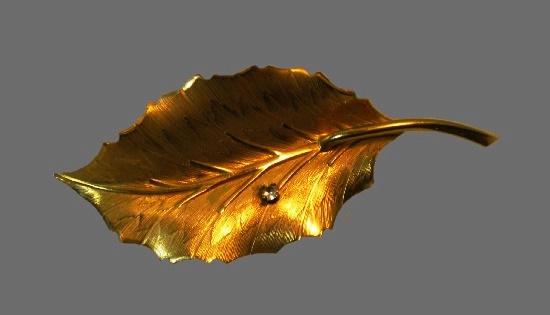 Imperial Pearl vintage costume jewelry
The history of the Imperial Pearl jewelry company began over 100 years ago, in 1917 in the jewelry capital of the USA, Providence. Its owner Joseph Gladstone later renamed it to “Imperial Pearl Syndicate” in 1941. For jewelry, the designers used Akoya pearls, pearls from the Tahitian islands, South Sea pearls, freshwater pearls and Keshi pearls. The company held a leading position in the pearl jewelry market, and its jewelry was very popular with fashionistas of that time, however, as it is now. High quality, made of silver and gold plated, this costume jewelry is highly collectible. Hollywood stars, such as Elizabeth Taylor, Shirley Temple, and Loretta Young took part in the company’s advertising campaigns.
Noteworthy, in the period from 1928 to 1969, the company registered several trademarks. In particular, Marslieu (1928 – 1948), Imperial (1943 – 1986), and Sculpted Pearls (1952 – 1992).
Gladstone sold the company to Sidney Weiss in 1969.
END_OF_DOCUMENT_TOKEN_TO_BE_REPLACED 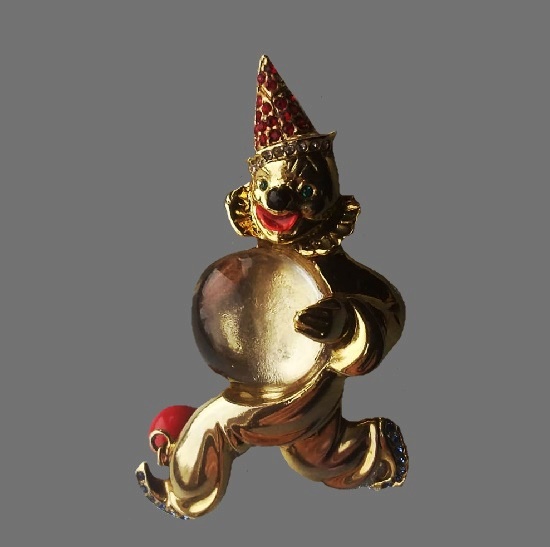 Marslieu vintage costume jewelry
Traditionally, while expanding their business, many large jewelry companies registered several jewelry trademarks. And the Imperial Pearl Company, later the Imperial Pearl Syndicate, is no exception. For more than a hundred years of operation, Imperial Pearl has founded several trademarks. Specifically, Marslieu (1928 – 1948), followed by Imperial (1943 – 1986). Also, Sculpted Pearls (1952 – 1992), Chicago Syndicate(1976 – 1982), Chandelle(1977 – 1983), Sabre (1976 – 1983), and Attachments (1993 – 2001).
The first products labeled Marslieu appeared in 1928. These were handcrafted figural costume decorations made with the use of sterling silver, gold plating, rhinestones and luminous faux pearls. The marking on the back side of each item included the word “Marslieu” in writing letters and “Sterling Silver Pat Pend” on oval base. Frederick J.Pearsall was the main designer of the company. Located at 7 Beverly St. Providence 3, Rhode Island, Marslieu was active for two decades, from 1928 to 1948.
END_OF_DOCUMENT_TOKEN_TO_BE_REPLACED 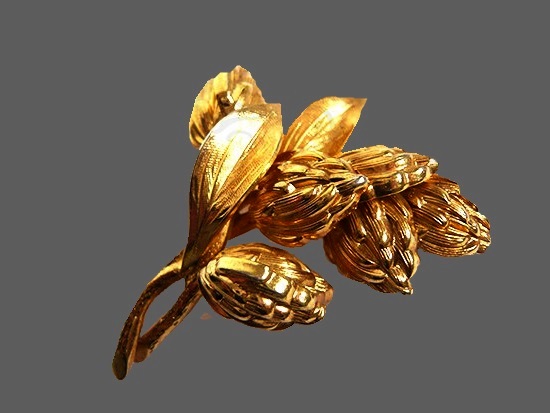 Henkel Grosse vintage costume jewelry
The history of Henkel and Grosse began in 1907, in the German capital of jewelers – the city of Pforzheim, when Heinrich Henkel and his brother-in-law Florentin Grosse opened their own company. The firm grew, and in the mid-1920s, the designers established the first business contacts with the United States. Ten years later, they worked with such fashion houses as Lanvin and Schiaparelli in Paris, as well as Harrods in London and Saks in New York. In 1937, Henkel & Grosse was awarded the Medal of Honor at the World Exhibition in Paris for the innovative design of jewelry, as well as for the creation of new technologies in their production.

Many Dior jewelry lovers know the name “Henkel & Grosse”. The creative union of these famous designers took place in the post-war years. Dior was looking for new forms and turned to the best designers of the time – Kramer, Grosse and others. A new stage in the history of the company took place in 1955. Henkel and Grosse got the license for the design, production and sale of luxury jewelry for the Dior brand. Art, technique and craftsmanship managed to overcome the political tensions between France and Germany, former adversaries. A separate company Christian Dior Bijoux was created. However, Henkel & Grosse continued to produce their own jewelry under their own brand. Noteworthy, the licensing agreement lasted over 50 years.
END_OF_DOCUMENT_TOKEN_TO_BE_REPLACED 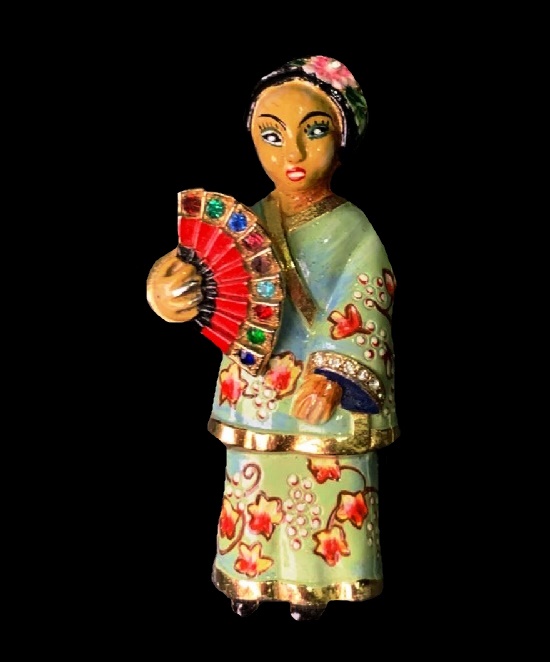 Walter Lampl vintage costume jewelry
The history of the American jewelry brand “Walter Lampl” began after the Second World War, in 1945. Its founder, Walter Lampl Sr. was born in 1895 to a poor family in New York. Since childhood, he had to work, selling newspapers on the streets and dreaming of a better life. His ambition, coupled with his talent, paid off. First, he bought long chains and shortened them to fit a watch. Thus, he earned his first money to start hiw own business. Gradually, he took a more serious interest in the jewelry business. Already in 1921, at the age of 26, he founded a wholesale jewelry company of the same name, with an office and showroom at New York’s 47th Street. In fact, it was a family business of Walter, his wife and their growing son.
Traditionally, the designer created quality jewelry using gold filling, sterling silver, moonstone and rhinestones. Known for the quality and exceptional designs, Walter’s jewelry was very popular. Realistic hand-made insect brooches and pins, as well as unique figurative brooches, are now rare and highly collectible. Until 1945, jewelry markings on the back of items included “Sterling” and the initials “WL” in script in a shield.
Unfortunately, Walter passed away in 1945 at the age of 50. His wife and son continued his business, but in 1959 the company ceased to exist.
END_OF_DOCUMENT_TOKEN_TO_BE_REPLACED 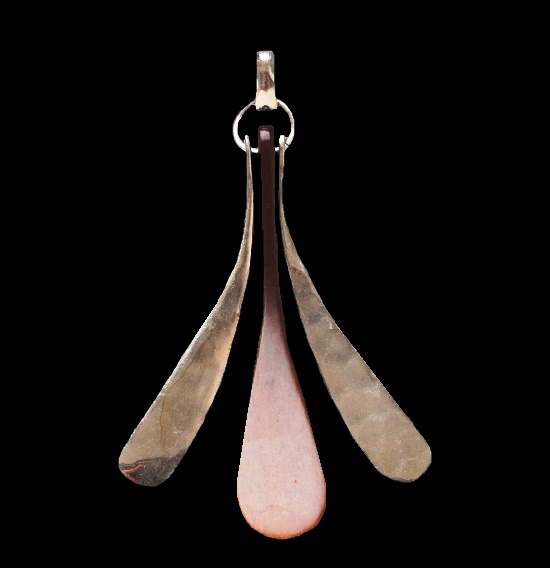 Robert Lee Morris vintage costume jewelry
American jewelry designer of the 1960s, Morris first exhibited his work at the Sculpture to Wear exhibition in 1972, thereby launching his career and meeting influential clients. Also, he caught the attention of the press. Morris carved out a segment of the jewelry market for himself by selling his jewelry through Artwear stores in New York. Thanks to his close ties with leading fashion magazines, his work and his name became known throughout the country.
When it all began, less than fifty years ago it was impossible to predict that any of this would happen. “Full of very revolutionary ideas”, he left Beloit College in Wisconsin in the late 1960s. Morris grew up in an Air Force family, spending his ten years in Japan and his senior years in Brazil.
His success story in jewelry design began on an abandoned farm in Wisconsin. There he, together with a small group of like-minded friends, learned how to make jewelry. However, when the house burned down, Morris and his friend moved to Vermont and opened a workshop there. They did what they knew and had to do to make money. He read books on jewelry, such as the Thomas Gentille’s jewelry book. Everything else, history and success grew out of these small beginnings. Already in the late 1980s, more than 60 people worked for his company, located in the center of one of the New York districts.
END_OF_DOCUMENT_TOKEN_TO_BE_REPLACED 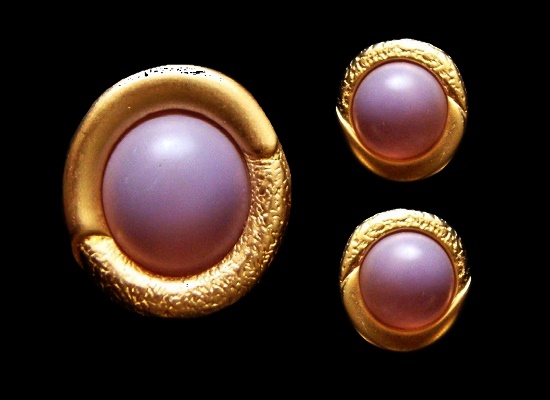 German jewelry designer Ernst Gideon Bek
Born on April 18, 1872 in Pforzheim, Ernst Gideon Bek (1872-1945) was best known for making mesh handbags in silver, gold and platinum. Pforzheim in Germany, like Providence in the United States, was the center of jewelry manufacture at the time. Young Ernst had the opportunity to study jewelry and gain good practical experience in well-known local companies and workshops. In particular, at Rothacker, Kinzinger in Pforzheim and Baer in Hanau. A talented jeweler, he was CEO of the Pforzheim jewellery industry at the Chicago World’s Fair at the age of 24. At the age of 25 he founded his own company with branches in Birmingham, Paris, Toronto, New York, and India (1897).
Noteworthy, Ernst’s wife, Emily, was the sister of one of the founders of the American jewelry company Binder Bros. Accordingly, he traveled frequently to the United States and subsequently sold his products through Binder Bros. In addition to handbags, he produced costume jewelry, which he marked with a butterfly stamp. Traditionally, the designer used sterling silver, gilding, metal alloys, bakelite, and enamel.
Two years after a trip to Italy in 1932, he retired from business due to a stroke. His two sons, Wesley (born 1903) and Orville Sigfrid (born 1909), helped his father in the family business. After Ernst’s death in 1945, the sons took over the business and renamed the company to EG Bek & Co.
END_OF_DOCUMENT_TOKEN_TO_BE_REPLACED