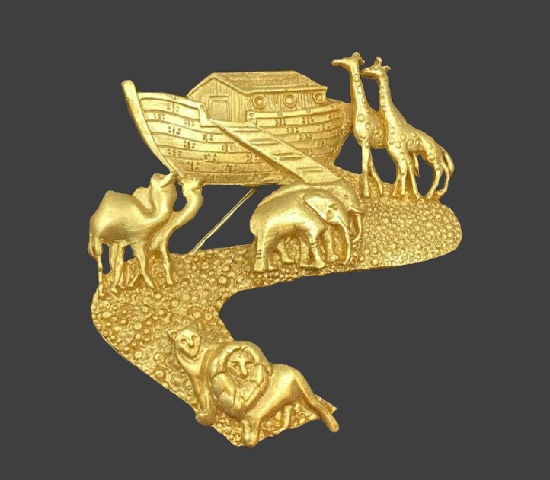 Laura Gayle vintage costume jewelry
The history of the Laura Gayle brand for the production of jewelry and watches began in October 1986. The brand was one of dozens of trademarks owned by Dillard’s Inc., headquartered in Little Rock, Arkansas. Dillard’s Inc. is an upscale American department store chain founded in 1938 by William T. Dillard.
The name Laura Gale is fictitious and does not identify any specific living person. Labeled as “American Classics”, the Laura Gayle brand ceased to exist in 2009.
Traditionally, LG craftsmen used metal alloys of gold and silver tones, Austrian crystals, enamels and rhinestones. The markings consist of the wordmark “Laura Gayle” written in a fancy script.
Notably, there was also the Laura Gayle trademark owned by the Mercantile Stores Company Inc. for the production of clothing, leather goods, jewelry and accessories. Founded in 1996 in Ohio, the brand ceased to operate in 2000. Despite the fact that both brands are of the same name, it is very easy to distinguish them due to the design and labeling. Thus, the labeling of Laura Gayle trademark owned by the Mercantile Stores includes “Laura Gayle” in capital block letters.
END_OF_DOCUMENT_TOKEN_TO_BE_REPLACED 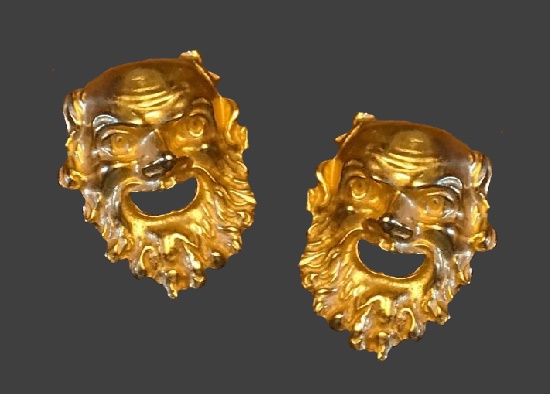 Signed Prevost vintage costume jewelry
The history of the English jewelry brand Catherine Prevost began in 1991, when a young college graduate opened her own shop and launched a jewelry production. London fashion icon, Catherine is the mother of four daughters who are also involved in the family business. Starting from a small store on Walton Street in London, today the products of this brand are sold in the most prestigious boutiques and department stores in the world. In particular, Neiman Marcus, Harrods, and Saks 5th Avenue. This brand’s products in addition to jewelry include clothes and accessories. Catherine herself, beautiful and stylish, is the epitome of classic elegance and glamour.
END_OF_DOCUMENT_TOKEN_TO_BE_REPLACED 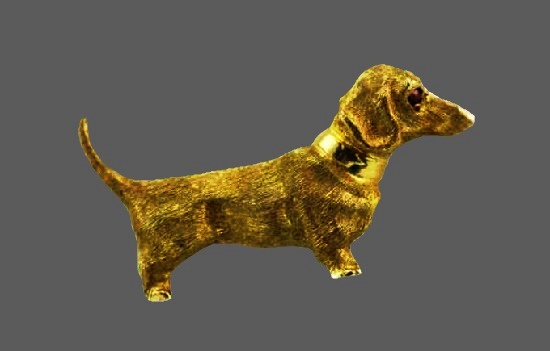 Signed DF Danfrere vintage jewelry
One of the 47th Street jewelers in New York, N.Y., Danfrere fine jewelry began its history in August 1968. According to the Official Gazette of the United States Patent Office, Danfrere Co. filed for DF trademark in July 1968. The company produced fine jewelry with the use of 14 K gold and precious stones – diamonds, sapphires, emeralds and rubies. Traditionally, the designs of pins, clip earrings and brooches included figural animal and flower motif.
Noteworthy, the labelling of DF jewelry differs. Thus, the earliest pieces (since 1968) include initials DF in a shield, and since 1970s the marking changed to “Danfrere Copyright” and 14KT Copyright. The marking changes could be due to a business merger, or ownership changes. The company ceased to exist before 1980.
Similar New York jewelry companies, such as Danfrere Creations and Dankner & Sons could relate to Danfrere Co.
END_OF_DOCUMENT_TOKEN_TO_BE_REPLACED 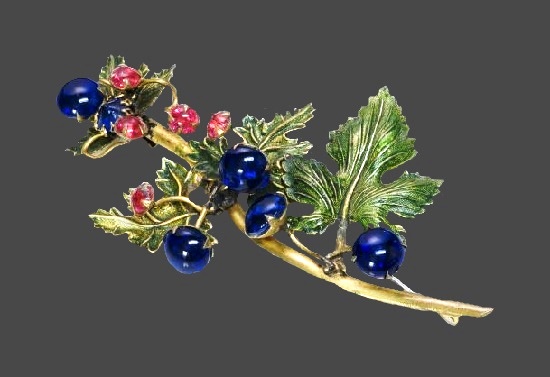 CIS Cissy Zoltowska vintage costume jewelry
Born in Vienna, Maria Assunta Frankl-Fonseca married Polish Count Zoltowski and became known as a costume jewelry designer Countess Cis Zoltowska.
Initially, Maria handpainted buttons & cufflinks in Lausanne (1944-1950). Since 1951 she became interested in designing ceramic and fantasy costume jewelry. However, most of her work of that period is unsigned. In the 1960s she began marking her jewelry with crowned CIS, ‘CIS of Paris’, or ‘Countess Zoltowska’. Also, her earliest pieces include marking “Austria”.
Noteworthy, living between Paris and Vienna, she produced jewelry collections for iconic French haute couture houses. Among them, in particular, were Pierre Balmain, Jacques Fath, Helena Rubenstein, Christian Dior and Balenciaga.
Traditionally, she handcrafted fantasy jewelry using crackled glass cabochons and Swarovski rhinestones in exquisite colour combinations.
Distributed worldwide, CIS jewelry frequently appeared on the covers of Vogue, Paris Match and Harper‘s Bazaar. Creative artist and designer, Cis Zoltowska moved to Los Angeles in 1967. She lived in West Hollywood until her death in 2004.
Highly sought after and collected, her jewelry will increase in value every year.
END_OF_DOCUMENT_TOKEN_TO_BE_REPLACED

American jewelry designer Terri Foltz-Fox
Houston, Texas based artist, ceramicist, goldsmith, art teacher and designer, Terri Foltz-Fox began experimenting with married metals in 1977. Developing fusing metal technique, she created multicolor geometric patterns on the metals. The metals traditionally included brass, fine and sterling silver, nickel and copper.
While still a student of Philadelphia College of Art, she tried to possess the secrets and magnetism of ancient cultures. In particular, masks and shields of East Africa, the totems of the Northwest American Indian, the pottery of the Hopi and Pueblo tribes, and more. According to Terri, she read all she could on African myths and legends, ceremonies and customs of North American tribes. As a result, her designs became a perfect integration of tribal influence and contemporary metalsmithing.
END_OF_DOCUMENT_TOKEN_TO_BE_REPLACED 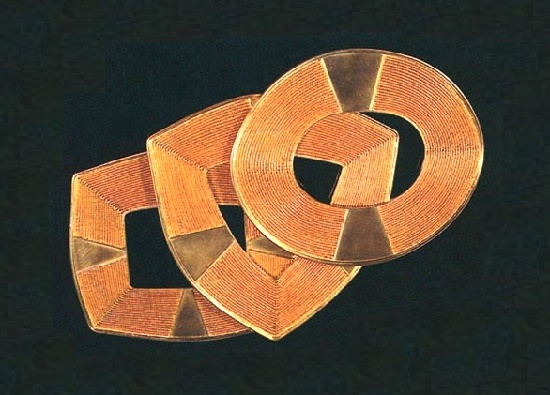 American jewelry designer Mary Lee Hu
Born 1943 in Ohio, Mary Lee Hu wanted to become an artist since elementary school. She graduated from Cranbrook Academy of Art in 1965 and Southern Illinois University-Carbondale. Today, she is a many-awarded American artist, educator and innovative jewelry designer known for using textile techniques in woven wire jewelry. Permanent participant of national and world art, crafts and jewelry exhibitions, her works are exhibited in various museums. In particular, The Metropolitan Museum of Art, Museum of Arts & Design in New York City, National Museum of American Art in Washington DC, The Victoria and Albert Museum in London, etc. Also, her works are in numerous private collections throughout the United States and internationally.
Traditionally, weaving and fabricating her abstract and geometric pieces by hand, Mary Lee Hu used 18 and 22 K gold and silver as textile. According to the designer, she began first exclusive experiments applying fiber techniques to metal in 1966. Noteworthy, that was the time of the Scandinavian dominance of smooth and polished surfaces in metal jewelry. Thus, Mary Hu’s jewelry was the complete opposite of the trend of that time.
END_OF_DOCUMENT_TOKEN_TO_BE_REPLACED 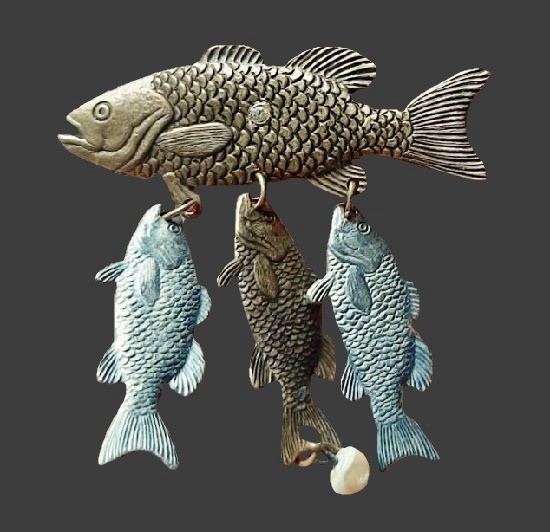 La Contessa vintage costume jewelry
Born in 1960, Baltimore based designer Mary DeMarco has always wanted to be an artist. After receiving a Bachelor of Fine Arts degree from Towson State University and graduating from the Maryland College of Art, she continued her studies in Florence.
Returning home in the early 1980s, she took a job as a waitress at Hampden, but in her spare time she created jewelry from the old jewels she had at home. Colleagues at work appreciated the work of the designer and began to order jewelry for themselves and their friends. Soon, the business began to generate income and motivated her to start doing jewelry professionally. She worked in local jewelry workshops, but she thought about starting her own business.
William Wolfe supported his wife’s aspirations and they founded DeMarco-Wolfe, Ltd with the La Contessa jewelry brand. Starting a family business in their home in Charles Village, they soon moved to a mall, bought the necessary equipment, and hired a few people. Exquisitely handcrafted, La Contessa jewelry was sold successfully in department stores and boutiques in all states. Created in the 1980s-90s pieces are especially valuable for lovers and collectors of vintage jewelry.
Incorporated on Monday 13th January 1986, DeMarco-Wolfe, Ltd is still active.
END_OF_DOCUMENT_TOKEN_TO_BE_REPLACED