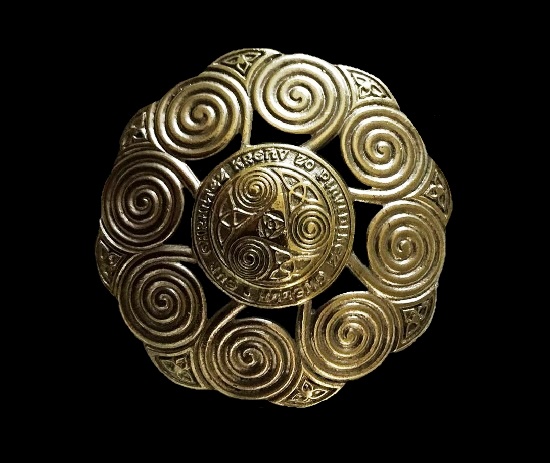 The history of the French jewelry brand Kelt spans no more than three decades, from 1936 to early 1960s. Initially, it was a studio-workshop in Paris, founded in 1936 by French jewelry designer Maison Rivière. Riviere was a member of the public art association of designers and writers of Franco-Breton origin “Union of Seven Brothers” (Ar Seiz Breur). An important focus of this movement was the revival of the original Kelt-Breton art. Accordingly, in their work, they used Celtic symbolism, combining it with folk ornamental archaism, early Christian symbolism and medieval heraldry. In fact, the Kelt Maison Rivière Company was the only studio-workshop in France that embodied the images and ideas of the “Union of Seven Brothers” in jewelry.
Noteworthy, created exclusively by hand, jewelry in the period 1935-1939 was carried out by prominent artists and designers of France. In particular, one of the creators of the Seiz Breur artistic movement Breton designer René Yves Creston (1898-1964), and Pierre Péron (1905-1988).
Having survived the German occupation and the post-war years, the Kelt studio practically ceased operations in the early 1960s. Although the French jewelry company Madilar bought out the Kelt brand and its jewelry stock in 2000, no new products appeared. The new owners announced their intention to revive the Kelt while maintaining its unique cultural identity. However, currently the company sells Kelt jewelry made in the middle of the last century.
END_OF_DOCUMENT_TOKEN_TO_BE_REPLACED

Krizia vintage costume jewelry
This stylish statement brooch “Heart and Leopard” belongs to the rare collection of costume jewelry from the best decade of the brand’s existence – the 1970s. A gold-plated coin at the base, and a lucite heart of “tortoise shell” color, the center of which adorns the cut out hallmark “K of Krizia”. And at the top of the monumental heart, as at the top of a mountain, there is a Leopard covered with tiny clear and black Swarovski crystals.
The history of the legendary Milan fashion house Krizia began in 1954, in a tiny two-room apartment, where two friends, Mariuccia Mandelli and Flora Dolci, sewed their dresses.
According to Mariuccia, she dreamed of becoming a fashion designer since childhood, when she sewed dresses for her dolls. In 1957, her models of “fruit” dresses at the SAMIA international fashion salon became a success and sparked interest in the brand. Already in 1964, Mandelli received the first prize for the provocative collection “Black and White”. Then followed other awards for innovative ideas in the fashion world.
The company expanded with the creation of sub-brands Poi by Krizia, K Krizia, Krizia SPA, and Krizia Uomo, and more. By the way, the name Krizia comes from Plato’s unfinished Dialogue.
END_OF_DOCUMENT_TOKEN_TO_BE_REPLACED 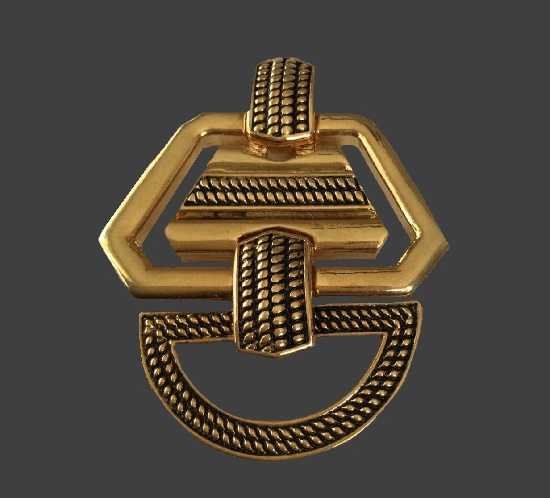 Etienne Aigner vintage costume jewelry
Born in Hungarian city of Ersekujvar (now Slovakia), Istvan (fr. Etienne) Aigner (1904-2000) was the founder of Etienne Aigner. Currently they are separate haute couture houses Aigner US and Aigner AG based in New York and Munich, Germany, respectively. Both companies manufacture luxury goods including handbags, shoes, women’s ready-to-wear, wallets and leather accessories.
Initially, Aigner created high quality leather goods for boutiques and high fashion houses in Paris. Then, in the 1950s, after gaining invaluable experience in the fashion houses of Christian Dior and Cristobal Balenciaga, he came to New York to start a career as a designer. Already in 1959, Aigner founded the family business with his wife Suzanne, opening the first showroom in Manhattan, New York. However, ten years later they sold their company. Passionate about equestrian world, he marked his products with a logo stylized as a horseshoe with the initial A. A universal symbol of luck, the horseshoe logo became iconic, because luck played a big role in Aigner’s life. Jewish designer, Étienne (István) Aigner lived a long creative life, dying in New York at the age of 96.
Noteworthy, Etienne Aigner Inc. began creating watches, eyewear, and costume jewelry in the early 1980s.
The company, founded in 1959, is still active today, and vintage jewelry marked with a horseshoe with the initial A is highly collectible.
END_OF_DOCUMENT_TOKEN_TO_BE_REPLACED 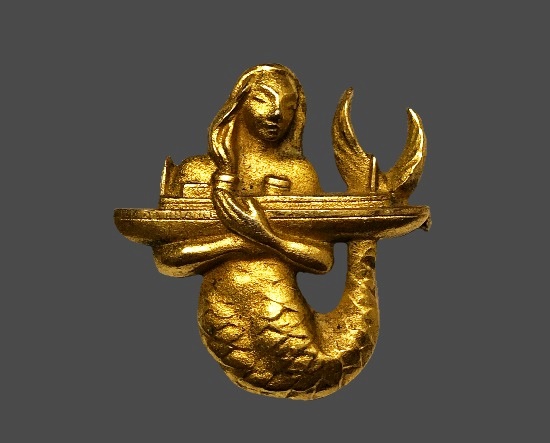 Arthus Bertrand vintage costume jewelry
The history of French jewelry company Arthus Bertrand began more than two centuries ago, in 1803, after the approval of the Legion of Honor in France. Entrusted with the production of insignia and awards for the Legion of Honor, Claude Arthus-Bertrand, an army officer, in addition to state awards, created jewelry designs. Today, the vintage pieces signed AB can be a great prize, a unique souvenir, or an expensive VIP gift.
Noteworthy, the marking on each piece can be different. In particular, “AB Edit. Paris”, “AB” monogram and Cie with a wheel underneath, as well as the eagles head which is the French mark for 18K gold, or 18K and FRANCE. Also, the marking could include the address of the jewelry shop, for example, 46. Rue de rennes”, or the name of the brooch’s designer, for example, “Du Sica,” followed by “Paris”. Considered the best of the horoscope zodiac jewels, many jewelers attempted to copy these designs, but without much luck, for these beauties are unsurpassed.
The company is still active, and its antique and vintage pieces are rare and highly collectible.
END_OF_DOCUMENT_TOKEN_TO_BE_REPLACED 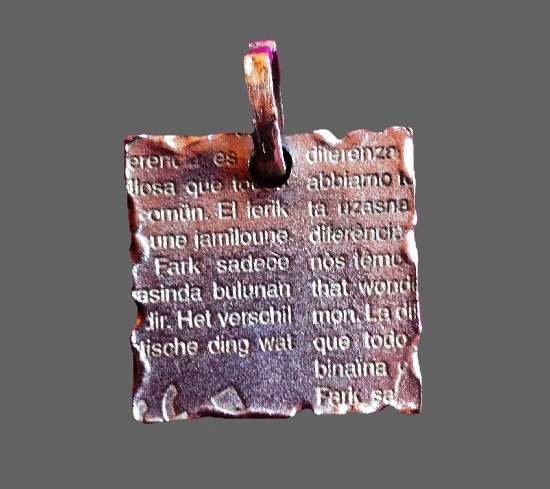 Biche de Bere vintage costume jewelry
Jewelry and ready-to-wear brand Biche de Bere (founded in 1986) announced its liquidation on Tuesday, November 6, 2007. The company, which employed almost 200 employees, had to close 20 stores. In 2006, its income was 6.5 million euros, but the debt was 7 million euros.
Born December 5, 1964, Nelly Biche de Bere was a graduate of the Ecole Supérieure de Design Industriel in Paris. Aged twenty, she left for the United States to continue her studies at the Pratt Institute in New York. Nelly combined her studies with work as a waitress, and at night she created jewelry. Noteworthy, she created her own brand and first costume jewelry collection from recycled materials in 1986. Her talent was quickly noticed, the first large orders appeared, and for the next seven years she worked in New York.
Back in France, she founded the division of her brand in Nantes in 1993 in the partnership with her husband Christophe Caïs. Her brand quickly gained popularity and Nelly opened several stores in France and US. Already in 1994, the company opened a factory in French Chateaubriand, then another factory, and the number of stores grew. She sold her clothing and original, innovative jewelry in 59 countries.
True fashion jewelry, her designs combine minimalism and abstract, and sometimes figurative. Among most notable are modernist typographic details. She created about 37 new collections per year, and most of them in limited edition. After 2007 Nelly concentrated her life on her family, children and painting.
END_OF_DOCUMENT_TOKEN_TO_BE_REPLACED 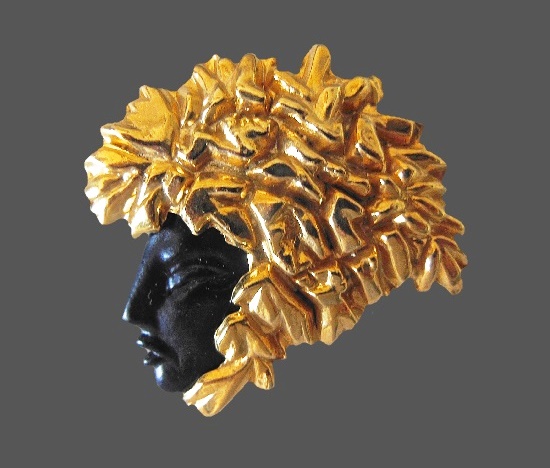 Born in 1936 in Paris, Jean Louis Scherrer graduated from the haute couture school (originally – Chambre Syndicale de la Couture Parisienne) in 1955. From that year on, Scherrer became an assistant at the Dior Fashion House, and was directly involved in the management until 1957. After the death of Christian Dior, the young designer continued his collaboration with Yves Saint Laurent, but left this brand in 1959.
In 1962, Jean-Louis opened his own fashion house, and in 1971 presented his first “Prêt-a-Porter” collection.
Like other haute couture houses, along with clothes and perfume, he designed costume jewelry which was an integral part of his collections. Noteworthy, he was one of the very few couturiers who personally prepared jewelry designs. According to art historians, it was not Yves Saint Laurent, but Scherrer who created most of Christian Dior’s mid-1950s jewelry designs.
Also, some of his jewelry was created at at Henkel & Grosse in Pforzheim, Germany (exclusive manufacturer of Dior jewelry). Traditionally marked with the initials “JLs” and “Paris”, or “Scherrer”, or “JL Scherrer” on oval base, these vintage pieces are highly collectible.
END_OF_DOCUMENT_TOKEN_TO_BE_REPLACED 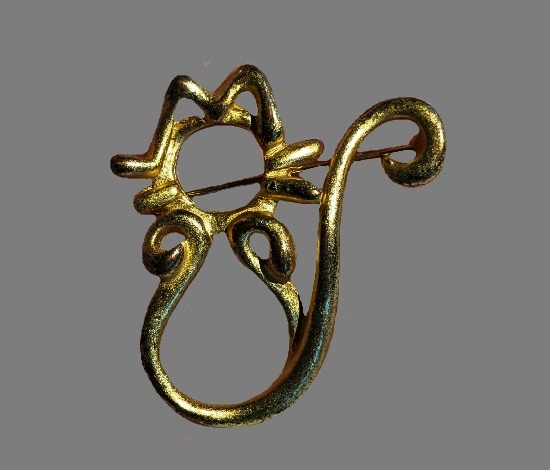 Agatha Paris vintage costume jewelry
The history of the French costume jewelry brand AGATHA began began as a family business in Paris in 1974. According to legend, Michel Quinioux, the founder of the company, chose the name Agatha for a reason. He wanted a feminine name that began with the letter A and related to natural stones, in particular to agate. In addition, he wanted to create affordable jewelry based on a combination of creativity, fashion inspiration and a cheerful spirit.
Traditionally, the company’s craftsmen use metal alloys, sterling silver, copper, art glass imitating semi-precious stones, as well as mother-of-pearl and natural stones. The first boutique, which appeared in the 1970s on Rue Montge in Paris, offered exceptional design at low prices. Due to its affordable prices, authenticity, high quality and innovation, Agatha labeled jewelry was a great success among the French. By the way, Michel Quinioux’s favorite ‘Scottie’ dog inspired him to create a pendant, and since 1980s it has been the company’s mascot.
Noteworthy, since 1993, the buyer could choose stones and design to create their own unique jewelry.
In 2006, the founder of the company, Michel Quinioux retired and sold his brand to the King Power group.
The company has about 300 stores and boutiques all over the world, including Italy, Japan, Canada, China and the United States.
END_OF_DOCUMENT_TOKEN_TO_BE_REPLACED