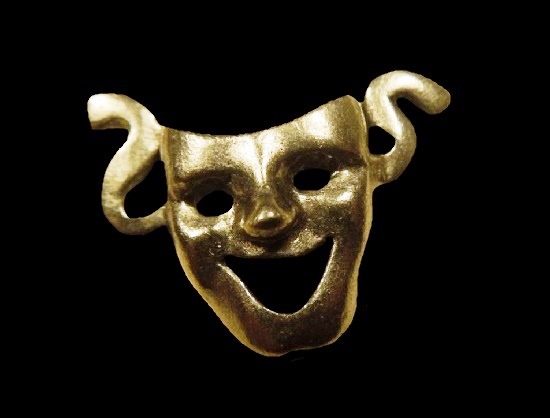 This year for Jim Clift Design, Inc. became a 40-year jubilee. Coventry, Rhode Island based jewelry company Jim Clift Design, Inc. began its activity in January 1981. The president of the company is a talented jeweler, artist and designer James R. Clift (born 31 January 1956). In fact, it is the private business of his family – wife Lynn, two daughters, and Jim’s grandchildren. In addition to handcrafted high-quality lapel pins, pendants and bracelets, they make accessories, push pins and various gifts. Traditionally made from fine pewter, each piece is marked with “Jim Clift”, and pewter.
Created in Rhode Island studio, Jim Clift wearable art consists of more than four hundred designs, from medical and scientific to household and holiday. According to the company’s motto, they create sculpture to wear.
Undoubtedly, carefully crafted, detailed lapel pin or any JC item can be an excellent memorable gift, or a personal present suitable for any occasion.
END_OF_DOCUMENT_TOKEN_TO_BE_REPLACED 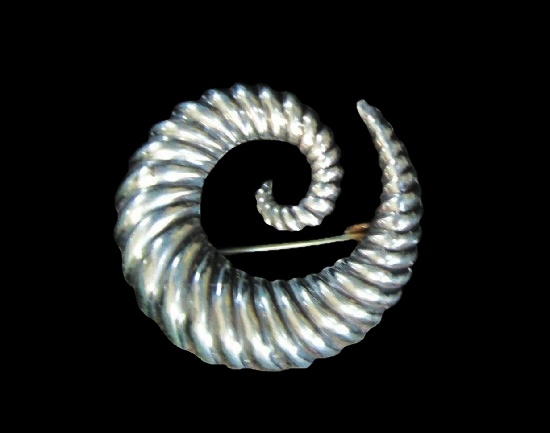 Erik Granit vintage silver jewelry
Born in 1930 in Helsinki, Erik Granit was only twenty-four years old when he founded his own company and opened his store in the capital of Finland. For more than three decades of his activity he has created hundreds of innovative minimalist, abstract, geometric and modernist designs. Traditionally, Granit himself and other designers who worked for the company handcrafted jewelry models (mostly rings), with the use of sterling silver.
Noteworthy, the marking on the jewelry pieces included various small stamps. In particular, Erik Granit (or EG), 925H (or 925 Sterling) for silver purity, Helsinki stamp, Crown, or Boat, or Turku. Also, the marking included a letter and a number (for the year of production) – for example, S7 for 1971.
Unfortunately, the talented designer Erik Granit died in the prime of his creative powers, at the age of 58. Due to this, his once successful jewelry company ceased to exist in 1988. Jewelry pieces created in 1950-80s continue to be popular with vintage jewelry collectors today.
END_OF_DOCUMENT_TOKEN_TO_BE_REPLACED 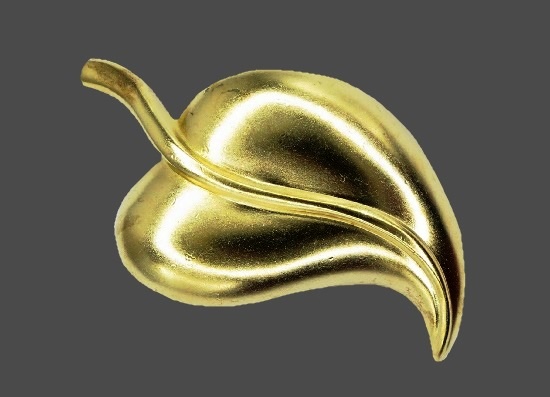 Signed FO Inc vintage costume jewelry
The history of “FO Inc.” jewelry trademark began in the jewelry capital of the USA – Providence, Rhode Island. Registered in 1974 by a hereditary jeweler Fernando Ronci, his private company “Fernando Originals Inc”, located in North Providence, ceased to exist in 1996.
Traditionally, the craftsmen of the company handcrafted exquisite high quality costume jewelry. Most often, they produced clip on earrings, and less often pendants, necklaces and pins. Their abstract and haute couture style, so popular in the 1980s, brought fame to the company. Noteworthy, FO craftsmen used gold tone metal and enamel, and didn’t use rhinestones. Also, they labeled their products with the acronym “FO Inc” and a copyright sign, without a frame.
Today Fernando Originals has become collectible vintage.
END_OF_DOCUMENT_TOKEN_TO_BE_REPLACED 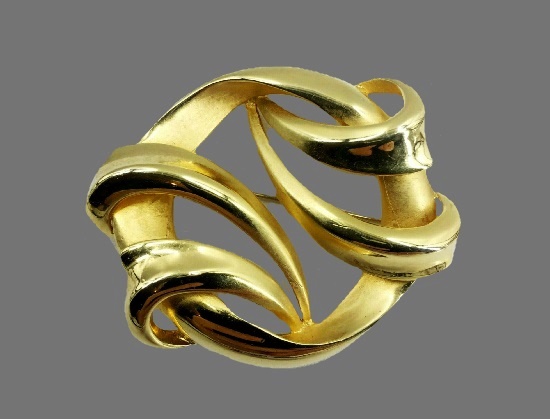 Noteworthy, a similar jewelry company located in North Providence, Rhode Island – “Fernando Originals Inc”, marked its jewelry with FO Inc. Registered in 1974 by Fernando Ronci, the privately owned company ceased to exist in 1996. The craftsmen of this company created costume jewelry of similar style, materials and design. No wonder, the products of these companies are often confused. Yet, the maker’s mark of these two companies is different. Specifically, Fernando Originals Inc labeled its products with the acronym “FO Inc” without a frame.

END_OF_DOCUMENT_TOKEN_TO_BE_REPLACED 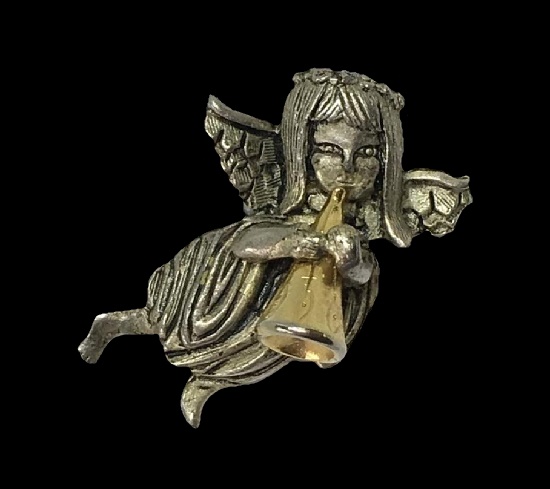 Signed DM vintage costume jewelry
The history of DM jewelry is very short, not more than a decade. Founded by David Monn in early 1990s in New York, the trademark ceased to exist in 1999. Most popular designs of DM handcrafted lapel pins, brooches and pendants included angels, flowers, holiday and hobby theme. Traditionally, the craftsmen used gold tone metal alloy, multicolor enamel and art glass imitating gems and rhinestones. They signed their pieces with DM, a copyright sign, and the year of production on oval base.
Noteworthy, there are some similar DM trademarks, but their marking differs.
First, D M Merchandising, Inc., which has founded 25 jewelry trademarks since 1991, but no DM trademark among them. Elmhurst, Illinois based private company D M Merchandising, Inc established in 1989, employed about 90 people and created heart, bridesmaid and artisan jewelry.
Second, Danbury Mint for Avon, which marked its jewelry with full name, so it doesn’t have anything to do with DM signed jewelry.
Third, DM jewelry (1991-2007), a trademark owned by Douglas Magnus, but the word marking included DM inside heart, that’s the difference.
END_OF_DOCUMENT_TOKEN_TO_BE_REPLACED 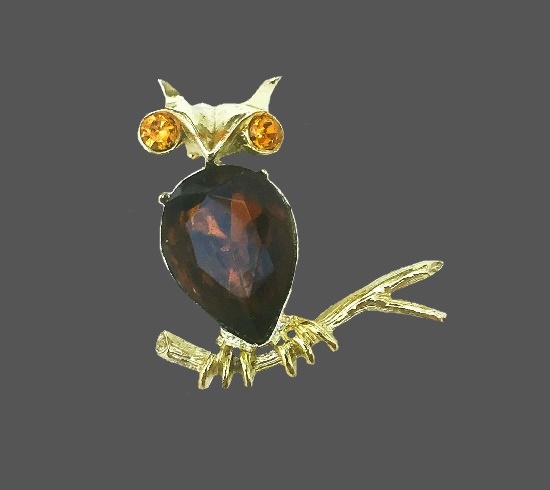 Signed DoDo vintage costume jewelry
Registered in 1994, Dodo jewelry trademark became a second brand owned by Italian jewelry company Pomellato. Founded in 1967 in Milan by Pino Rabolini, Pomellato followed the concept of prêt-à-porter jewelry, where jewelry is an accessory that can be worn in accordance with changes in clothing. This brand meets a variety of requirements, offering both costume decorations and expensive fine jewelry. Accordingly, the jewelers of this company use a variety of materials. In particular, 9K, 18k yellow and rose gold, silver, pearly and multicolor enamel, diamonds, tsavorites, spinels, sapphires, jade, rhinestones, and metal alloys. Most notable collections include: Nudo, Capri, Sabbia, M’ama Non M’ama, Iconica, Victoria, and Tango.
Noteworthy, the logo of the trademark is an extinct flightless bird dodo. The unusual appearance of Dodo and its significance as one of the most famous extinct animals have repeatedly attracted writers and mass culture figures. Many environmental protection organizations, such as Darrell Wildlife Protection Fund, use Dodo image to attract attention to the protection of endangered species. Similarly, Pomellato uses the image of dodo in a collaboration with WWF Italia.
Since October 2009, Pomellato has changed several owners and chief executive directors, and in July 2013, French-based multinational corporation “Kering” acquired Pomellato.
END_OF_DOCUMENT_TOKEN_TO_BE_REPLACED 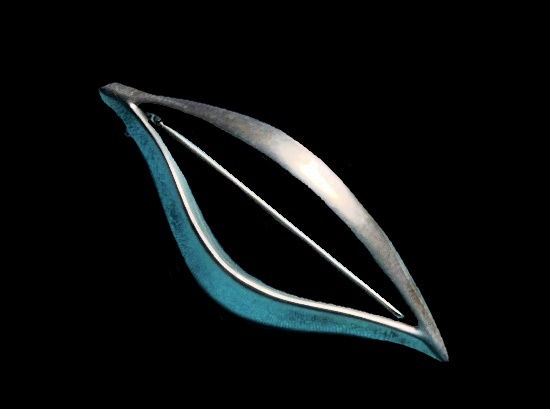 Swedish jeweler Gustav Dahlgren
The history of G. Dahlgren & Co, one of the oldest Swedish companies for the production of gold and silver products, spans more than a century. According to Ernst Fischer’s publication on the history of silver and gold production in Sweden, the company began operations in 1845. Gustav Dahlgren, in partnership with the Gold Goods Share Company, founded Guldvaruaktiebolaget G Dahlgren & Co in 1845, merging the two workshops located in the Oxie area in the southeast of Malmö Municipality, Sweden. Later, a branch of Dahlgren & Co also appeared in Stockholm.

Born in 1815, Gustav Dahlgren was a successful businessman, jeweler and philanthropist. He died in 1875 due to a serious illness. In fact, he did not have a family and children who could be the direct heirs of his business. However, his siblings continued the activities of the company, which went through ups and downs, a change in ownership and, accordingly, a change in product labeling.
So, early jewelry marking included “G A Dahlgren”, then “GD&CO” (Gustav Dahlgren & Co). Noteworthy, Swedish silver and gold products have special markings that include several symbols. G A Dahlgren marking, in particular, included M (city mark for Malmö), 3 crowns (Sweden), S mark (in hexagon indicating 830 silver or higher), and some numbers indicating the year of manufacture. For example, “D9” (for 1954), E9 (1955), V9 (1971), etc.