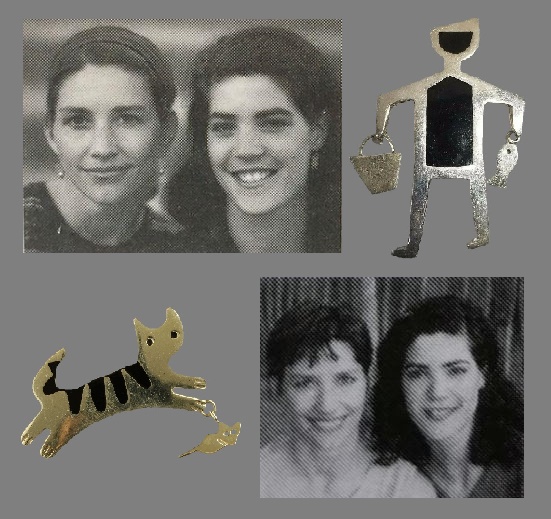 Anne & Jane Harvey vintage artisan jewelry
American artist and silversmith, Jane Harvey (b. 1964) established her family business “Anne & Jane” in 1989. It was a jewelry studio located at 850 E Oak St Fort Bragg​, California. Anne Harvey, who worked in Taxco, Guerrero, Mexico (since 1984), moved to Fort Bragg​ and joined the family business. Talented artists and designers, the sisters created whimsical pendants, earrings and brooches from sterling silver, metal alloys and enamel by hand. Traditionally, their designs included animalistic and nature inspired motifs, as well as houses and objects. They signed their jewelry creations with “A & J Harvey 925”.
In fact, most vintage items have marking “Anne Harvey Mexico sterling”, before Anne joined her sister’s business. Thus, the history of jewelry of the Harvey sisters is more than 30 years old. Noteworthy, their last large collection of realistic cats, dog breeds, as well as deer, leaves designs appeared in 2017.
Handcrafted in limited editions, these vintage pieces are collectible.
END_OF_DOCUMENT_TOKEN_TO_BE_REPLACED 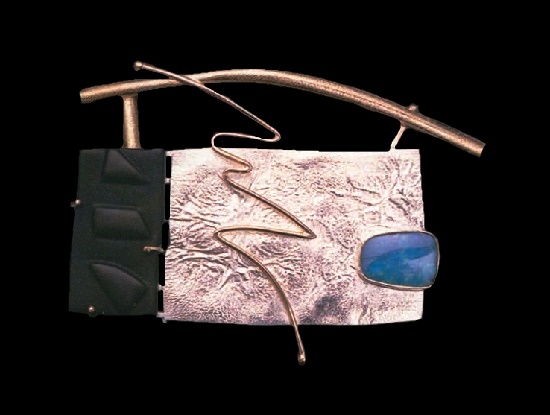 Eric Russell and Caroline Strieb jewelry art
Philadelphia, Pennsylvania based innovative goldsmith, Eric Russell (b. 1954) began making jewelry at the age of fourteen. And he was hanging around craft shows while he was still in high school. Strieb and Russell met by chance in the Philadelphia studio of Jonathan Stember in 1979. Strieb was working there on her course artwork at Philadelphia College of Art. And Russell was working there for the Rhinebeck Craft Show. He got together with Caroline in 1979, and they both reinforced and supported each other.
In 1982, they launched their creative family business. Through the years, Russell and Strieb’s work has retained the sense of controlled chaos-there are many elements in each piece, but they always coexisted harmoniously. Russell’s work grew more complicated in technique as the years went by, and his skills grew along with his artistic vision. From 1981 through 1985, Russell and Strieb took part in art exhibitions and sold their jewelry at gallery shows.
Traditionally, the designers used sterling silver, 14k, 18k, and 22k gold, colored gemstones, tourmaline, pearls, diamonds and other gems and minerals.
END_OF_DOCUMENT_TOKEN_TO_BE_REPLACED 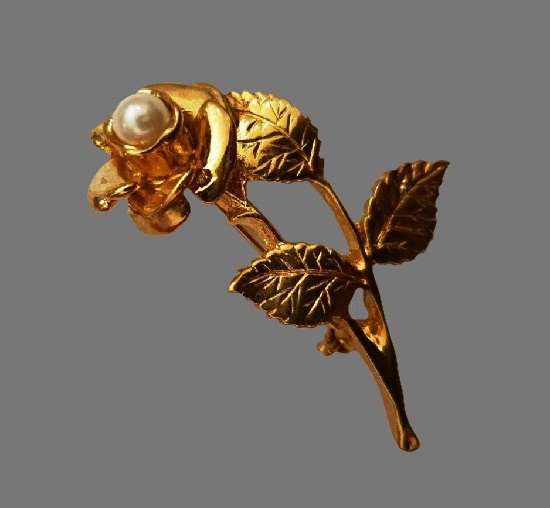 Signed Aconda vintage costume jewelry
The history of Aconda-branded vintage jewelry spans about three decades, from the late 1950s to the 1980s. Based in West Germany, the company produced fur clips, tie pins, lapel pins and brooches in classic and Art Deco style. Traditionally, the craftsmen of this company used metal alloys, bronze and silver with 14 carat gold plating. They also used zirconia, crystals, rhinestones, faux pearls and enamel. Each product was marked with the word “Aconda” and a copyright sign. Distinguished by very fine workmanship and high-quality Aconda jewelry is rare and collectible.
Unfortunately, there is no more detailed information on the Internet about the company that produced costume jewelry in the 50-80s of the last century in West Germany. Nor is it in the archival documents on the registration of patents, companies and trademarks.
END_OF_DOCUMENT_TOKEN_TO_BE_REPLACED 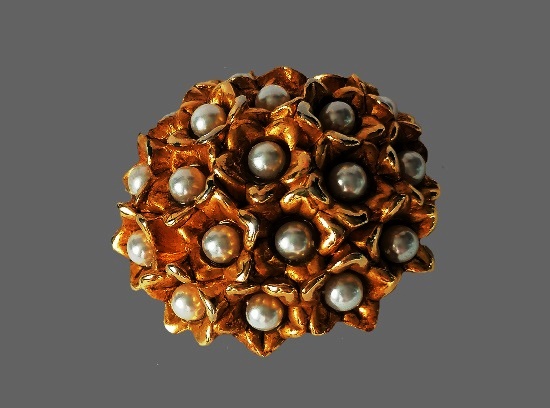 Alexis Lahellec vintage costume jewelry
A renowned French fashion and home interior designer, Alexis Lahellec began his creative career in the 1960s. In 1980-90-s the designer has created a unique collection of costume jewelry which is highly collectible now. Noteworthy, while creating his jewelry, the artist worked in collaboration with other designers. In particular, he collaborated with the jeweler Yaron for a long time, after whom he named his first jewelry collection, created in 1983. Also, he created a jewelry collection in collaboration with the artist and fashion designer Nicolas De Waël.
Handcrafted from chrome plastic “Cookware” collection (1985) was a great success. Since 1986 he started using hammered golden resin. Also, he created a series of colorful costume jewelry made of handpainted resin reminding the work of Niki de Saint Phalle. Traditionally, the designer marked his pieces with his full name “Alexis Lahellec” and “Paris”, or “made in France”.
Unfortunately, Lahellec is no longer creating jewellery. Instead, he is working on interior design, furniture and decorative items.
Wearable art, Avant Garde design statement costume jewelry created by Lahellec, is sold at art auctions, and the price of it will rise.
END_OF_DOCUMENT_TOKEN_TO_BE_REPLACED 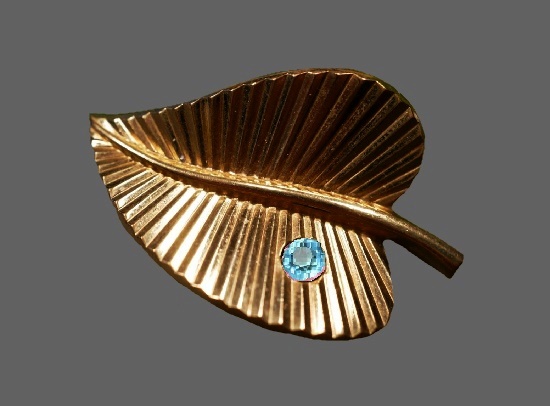 Rodi Wienenberger vintage costume jewelry
The history of ROWI, or Rodi & Wienenberger jewelry began in Pforzheim Germany in 1885, when Eugen Rodi and Wilhelm Wienenberger founded their company. Initially, it was a small workshop with a staff of four to make medallions, bracelets and brooches. In 1904, they began to apply American gold plating technology, where two layers of gold plating were applied to a silver plated metal jewel. Thus, they could guarantee that their jewelry pieces would retain their golden luster throughout their life.
The company flourished in 1890, employing 80 people, and by the end of 1899 employed about 700 people. And five years later it was a joint stock company with a capital of 500,000 marks. Eugene Rodi retired in 1900, and Wienenberger became the head of the company. Already in 1910 they built a new five-story factory.
After the First World War, the production premises had to be expanded again by buying neighboring plots of land. In addition to jewelry, they began manufacturing pocket watch cases.
In 1924, Wilhelm resigned from the management due to his health problems and Karl-Wilhelm Katz, who was responsible for export, took over the business.
Noteworthy, the marking GR or OR means gilding, and R anchor W is an old marking used around the 1935-1940s.
END_OF_DOCUMENT_TOKEN_TO_BE_REPLACED 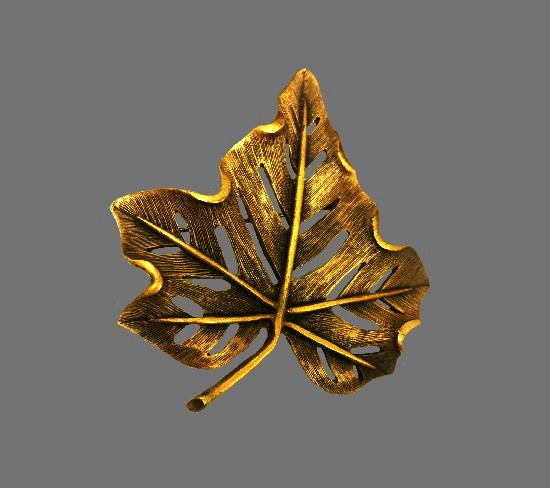 Signed CRA vintage costume jewelry
The history of American costume jewelry labeled “C. R. A.” spans not more than a decade. Incorporated in 1990s, Crimzon Rose Accessories, Inc. located in North Providence Rhode Island, ceased to exist in early 2000s.
. According to other sources, the company produced costume jewelry in the 1980s. Due to vintage look of these brooches, pins and rings, some indicate the date of their manufacture – the 1960s. In fact, it is impossible to refute or confirm this, as it is extremely rare in the vintage costume jewelry market.
The designs of these pieces range from Egyptian motifs to Art Deco, figural and heraldic, as well as classic flower and plant motif. The materials traditionally included gold and silver tone alloys, 925 sterling silver, faux pearls, art glass, rhinestones, and enamel.
END_OF_DOCUMENT_TOKEN_TO_BE_REPLACED 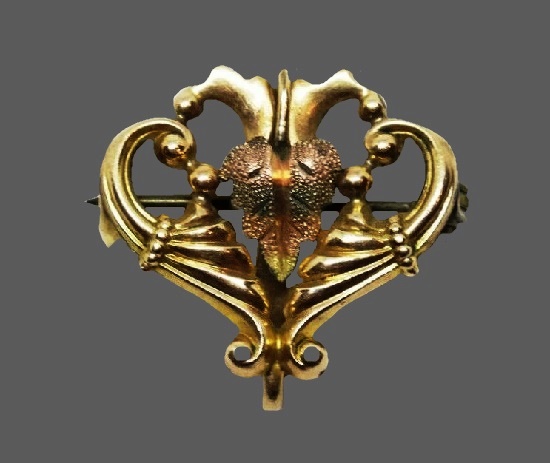 Robert Fitz Simmons vintage costume jewelry (1873-1952)
The history of Simmons jewelry dates back to 1873, when Robert Fitz Simmons, with his partners Joseph Lyman Sweet and Edgar L. Hixon, founded jewelry company in Attleboro, Massachusetts. Each of them invested $ 2,500 in the business, which then paid off. Fourteen years later, the company employed 200 people, and its offices and representatives appeared in New York, Berlin, Barcelona, ​​Rio de Janeiro, Buenos Aires, Montevideo, and Sydney.
Initially, the company produced watch chains, eyeglass chains, key chains, bracelets, and even cane handles. Noteworthy, the company became the first jewelry house to publish a catalog (1881). Innovative jewelers, they were the first to stamp products with manufacturer ID and offer customers a quality assurance (1880s). They were also the first to use “combination – link chains” (1890s) and the practical Marlow lock bracelet in 1899.
Fine quality, gold-filled or sterling silver jewelry by Simmons is highly collectible now.
The RF Simmons Co founded by Robert Fitz Simmons (1842, New York – 1894, Attleboro MA) ceased to exist in 1952.
END_OF_DOCUMENT_TOKEN_TO_BE_REPLACED