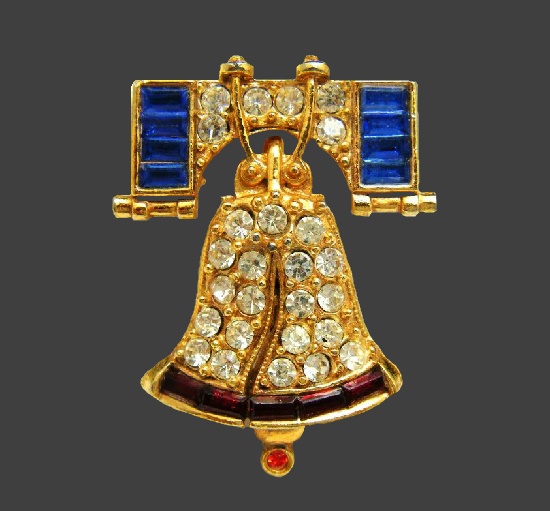 Signed Cinerama vintage costume jewelry
History of Cinerama Jewelry Inc began in 1966 in Cranston, Rhode Island. It was a family business founded by Ralph Rafaelian (January 3, 1935 – February 18, 2012). A hereditary Armenian jeweler, Ralph was the grandson of goldsmith Melkon Rafaelian, who came to America in the early 20th century.
Ralph (Raffi) opened a jewelry factory where he designed patriotic, as well as classic floral motifs jewelry using rhinestones and crystals.
Following the family tradition, Raffi taught his daughters and they helped him in the factory from childhood.
One of them, Carolyn Rafaelian, joined the company in 1994 and became a well-known jeweler, a businesswoman who founded her own company, Alex and Ani. In addition to co-owning Cinerama, she founded dozens of jewelry brands and even became the richest female jeweler.
After her father’s death, Carolyn Rafaelian took over the management of Cinerama.
END_OF_DOCUMENT_TOKEN_TO_BE_REPLACED 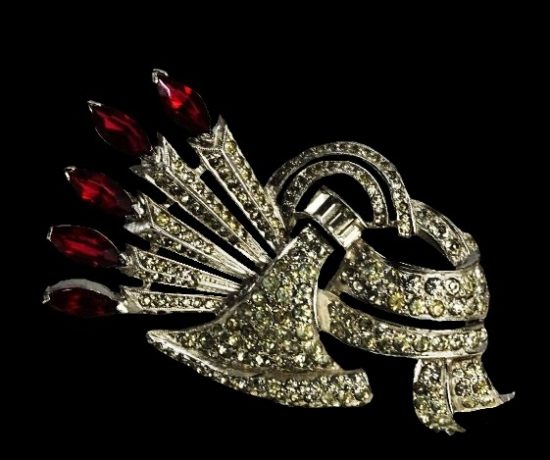 Dorsons vintage costume jewelry (1935 – 1960)
The history of New York jewelry trademark “Dorsons” spans a period of about three decades. Incorporated in 1935, D. Ornstein & Sons, Inc. (later renamed to Dorsons Jewelry Co., Inc.) ceased to exist in 1960. Initially, it was a family business of David Ornstein (1889 – 1954) and his sons, Bernard (1914 – 1992) and Irving (1920 – 2002). Headquartered in Manhattan, the company produced gold filled sterling silver bracelets, brooches, necklaces and watch cases.
Noteworthy, before founding his own company, Romanian-born David Ornstein had rich experience in jewelry business. Since 1919, he and his two partners owned Noveline Mfg. Co. (previously known as “Distinctive Jewelry Co., Inc.”) in New York City.
Innovative designer, during 1922-1945 David Ornstein had filed for several patents for rings, watch cases, bracelets, brooches, and even a brooch with a fountain pen!
Advertised in New York Times, Vogue, and Life, Dorsons Jewelry was very successful and the company had subsidiaries throughout the US and in Canada. Also, in addition to Dorsons, the company owned Jubilee and Dorel trademarks (the last one in partnership with Heller-Deltah Co.)
After the death of David Ornstein in 1954, the company went through name changes, mergers, and eventually ceased to exist.
END_OF_DOCUMENT_TOKEN_TO_BE_REPLACED 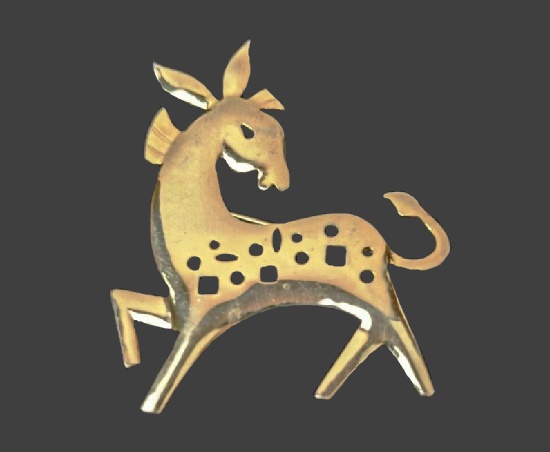 James H Hall vintage costume jewelry
The history of Providence Rhode Island based jewelry company James H. Hall Co Inc began in 1962. The company handcrafted animal design jewelry for about two decades and ceased to exist before the 1980s. Noteworthy, the alternative name for the company and its brand name was “Yankee Silversmiths”. Accordingly, the marking may include both names “James H. Hall” and “Yankee Silversmiths”, or “YS”, and sometimes the purity of gold or silver. In addition to gold and silver, the craftsmen used bright color enamels.
END_OF_DOCUMENT_TOKEN_TO_BE_REPLACED 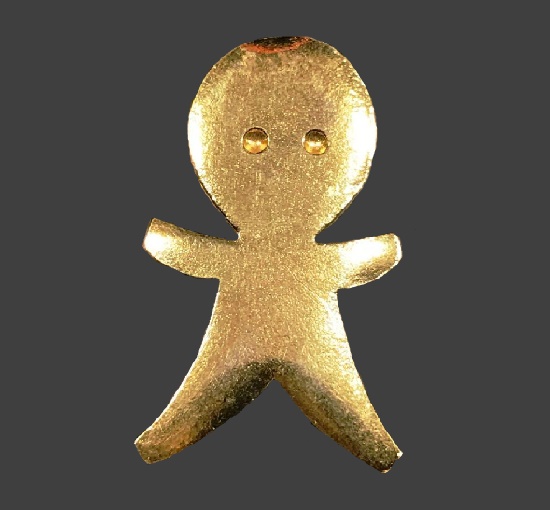 Signed Kookai vintage costume jewelry
The history of French jewelry brand Kookaï began in 1993, although the company began its activity in 1983. Founded by three friends – Jean-Lou Tepper, Jacques Nataf and Philippe de Hesdin, the company sold fashion clothes and accessories at accessible prices. Headquartered in Epinay-sur-Seine, France, the company opened four stores in Paris. The same year, the company became a subsidiary of Vivarte company (1996). Finally, Vivarte sold Kookai to Magi in 2016.
Noteworthy, Kokai jewelry trademark ceased to exist in 2004.
Handcrafted by French artisans, Kookaï pieces are easily recognizable. Very often, the designs include hippie motifs, minimalist and couture style.
Traditionally, the company’s craftsmen used metal alloys of gold or silver tone, as well as enamel and rhinestones. Also, many decorations include the company logo as well as the Kokai marking.
END_OF_DOCUMENT_TOKEN_TO_BE_REPLACED 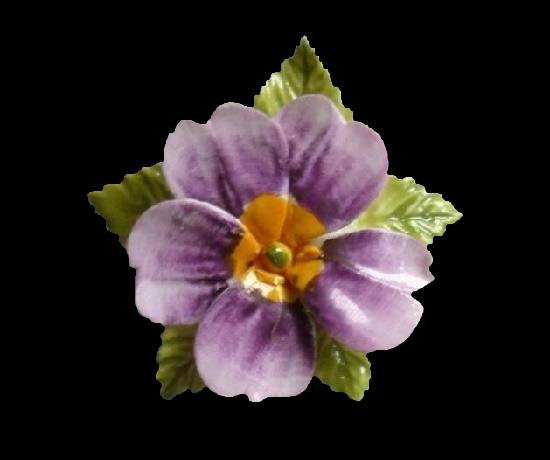 The history of English porcelain jewelry manufacture began in the middle of the last century. Based in Stoke-on-Trent, Dorothy Ann China Co was one of dozens of companies that made bone china brooches and clips in the 1950s and 60s. Among them – Cara China, Aynsley Fine Bone, Coalport China Co, Crown Staffordshire China Co, Denton China Co, Bone China Crafts Co, etc. Before that, many English porcelain manufacturers had already had rich experience in making porcelain tableware.
They rightly decided that the post-war English market needed something new, in accordance with the tastes of English ladies. Noteworthy, they approached the production of jewelry as seriously as the production of tableware.
The main material for the production of jewelry was the world-famous snow-white porcelain, called “bone china”.
Thanks to fine and accurate work and high-temperature firing, porcelain jewelry ornaments are guaranteed a long life. Sculpted and painted by hand, with meticulous attention to detail, each brooch or clip is unique wearable art. Today, these flower design ornaments painted in soft pastel colors are highly collectible.
Traditionally, the marking includes “Dorothy Ann China” and “Made In England”.

END_OF_DOCUMENT_TOKEN_TO_BE_REPLACED 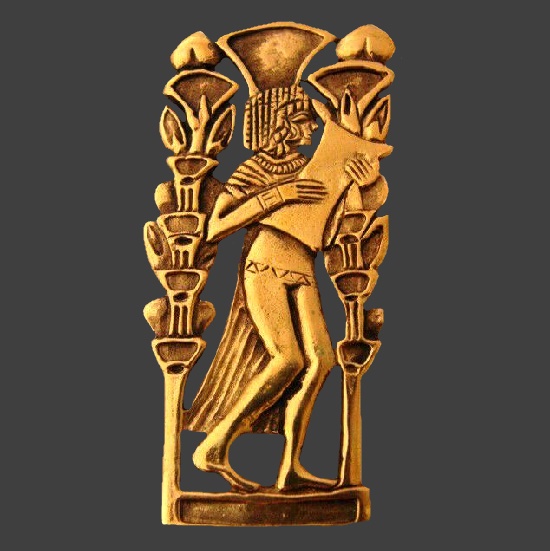 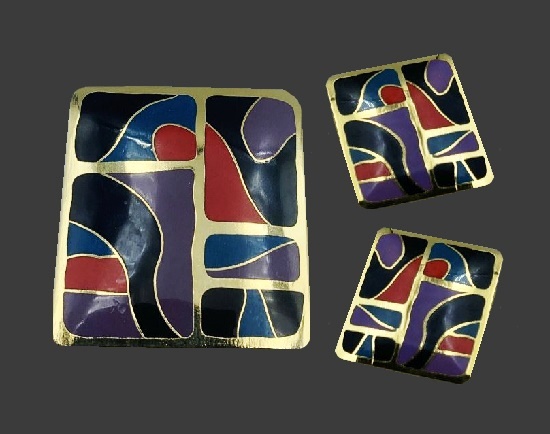 Samuel Huang vintage costume jewelry
A Taiwan-based costume jewelry company Samuel Huang operated for two decades from the 1970s to 1990s. According to scarce sources, the company also produced clothing and accessories. Traditionally, the company’s craftsmen made abstract design earrings in a minimalist style with the use of gold and enamel. The markings on the pieces included Samuel Huang in a stylized written script. In addition, the attached branded cards included information on purity of gold, the name of the trademark and the copyright sign.
END_OF_DOCUMENT_TOKEN_TO_BE_REPLACED