Paul Selenger costume jewellery
Many fans of vintage jewelry have long admired the products labeled “Selro” and “Selini”, but still know little about the company and the person who created these incredible decorations. Meanwhile, about Selro and its unusual jewelry are many legends, mysteries, and fantasies. It worked in the market of jewelry only a dozen years, but until now we, lovers of vintage jewelry, admire the original design and the unique beauty of Selro jewelry. However, there are fairly well-known facts from the history of the company. First of all, the founder of the company was immigrant from Odessa (Russian empire) Paul Selenger, who founded it in 1949 (or 1950) in New York (USA).
Second, about the fate of the founder. Paul Selenger was born in 1911 in Odessa into the family of an ordinary tailor. His father died young and left his wife and two children in financial distress. The revolutionary years made Paul’s mother emigrate from Russia to her older brother in New York City. It is known that for a long time, having passed a number of countries, in all possible ways the family of Selenger arrived in the United States only in 1927.
As we know, 1927 was the height of the American depression. Upon arrival, the young Paul and his sister Fanny began to work in the jewelry store of their uncle. One would assume that over the years, to appreciate the profitability of jewelry, Paul opens his production of jewelry … Yes, it would be that way, but before that … After obtaining American citizenship, Paul Selenger in 1942, during the World War II got into the Marine Corps of the US Army, and in 1945, continued to serve in North Africa and Japan. And only in 1948, Sergeant Salinger returned to civilian life. However, still interested in jewelry production, since he worked with his uncle in the store, he got a job in one of the oldest American factories ‘H.Pomeranz & Co. NY’. This company produced jewelry buckles, buttons, cuff links.

Very quickly the company is gaining momentum production. Initially, Selro jewellery aimed at the design completely different from the ornaments of the time. At the initial stage, all decoration Selro companies did not mark, and in the future it is not always done. They were sold with original tabs, or in the original box.

Despite this, all the decorations by Selro, were so distinctive that to confuse them with any other brand is almost impossible. High quality production, incredibly innovative jewelry design and rare talent of businessman Paul Selenger, who for a small amount of time developed the company. On the Selro production made jewelry for companies Florenza, Capri, Hattie Carnegie and some sources as saying that for HARGO. Paul Selenger was personally involved in the design of jewelry. 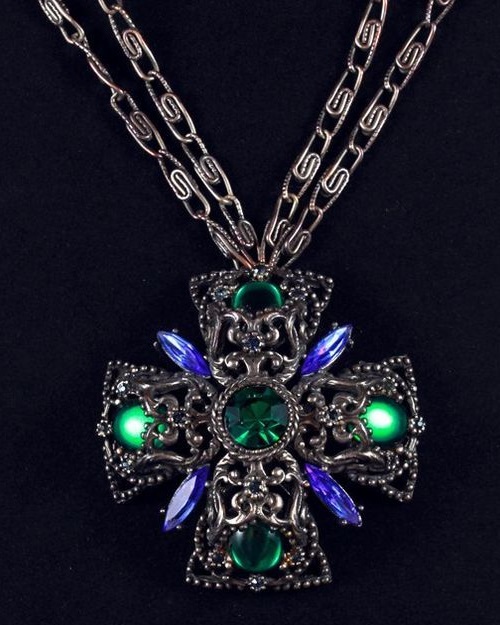 In the early 60s Selenger opens another line of jewelry with more refined design Selini. These ornaments were marked Selro / Selini, as well as there is evidence that both plants worked. One in New York and the other in Providence, Rhode Island. According to his family members, there was another line of jewelry marked Selan, which worked quite a short period of time.

What was the reason of decline in the production of the companies is not known exactly, but quite possible version – it’s deteriorating health of Mr. Paul Selenger. He married rather late, in his 52 years old, and had no children. And since he had no heirs, to continue his business could no one. He died at age 79 on Dec. 16, 1990. 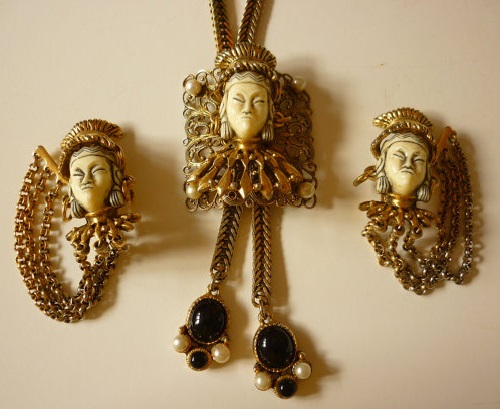 In 1960 Selro Corporation came under the control of the jewelry corporation Expansion Ltd., which produced the products under the brand name Selro / Selini until 1975. 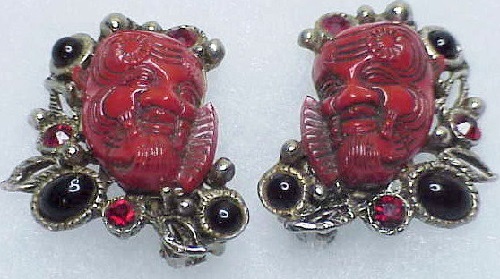 Noteworthy, many Hollywood film stars and known people loved jewellery company Selro. In particular, very popular were decorations with faces of Thai, Asian and African princesses, Chinese masks and with inserts of Lucite – confetti. Traditionally in a huge demand, this jewelry won the hearts of collectors for the nontrivial design, original materials and bold textures.

Selro and Selini jewelry was the production of a New York City firm, Selro Corporation owned by Paul Selenger (15 August 1911 Odessa, Russia – 16 December 1990, New York). However, much of this vintage (circa 1940’s to 1970’s) costume jewelry is unmarked, as the company used paper hang tags. Accordingly, Paul Selenger mark is on well-made expensive costume jewelry. 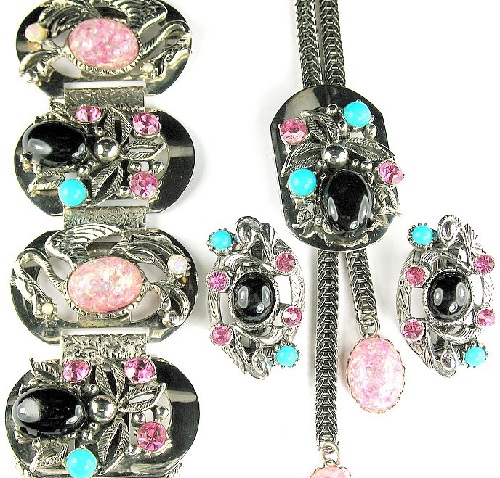 A pair of clips 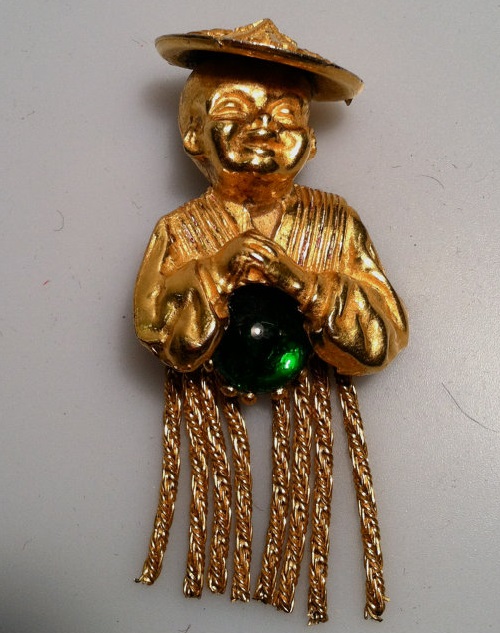 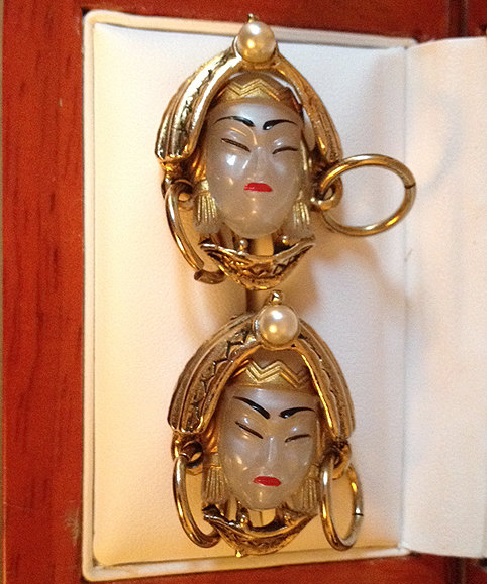 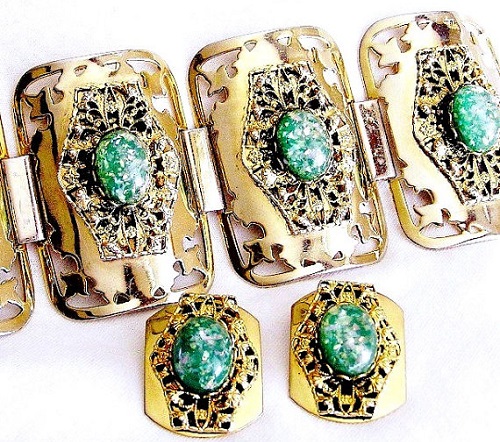 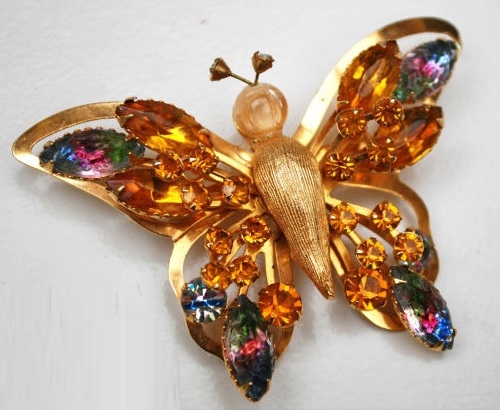 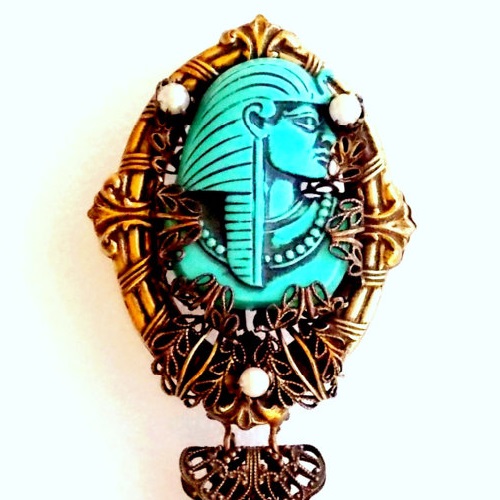 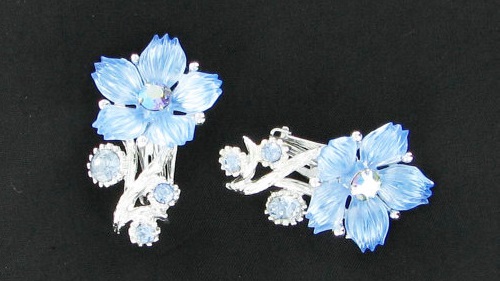 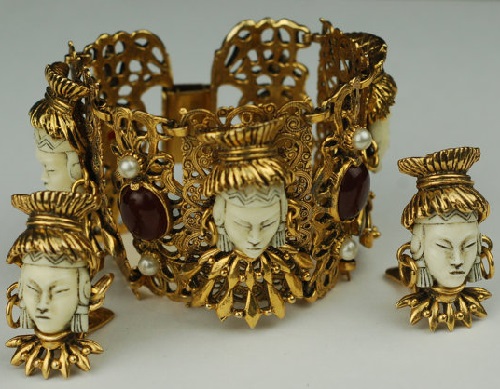 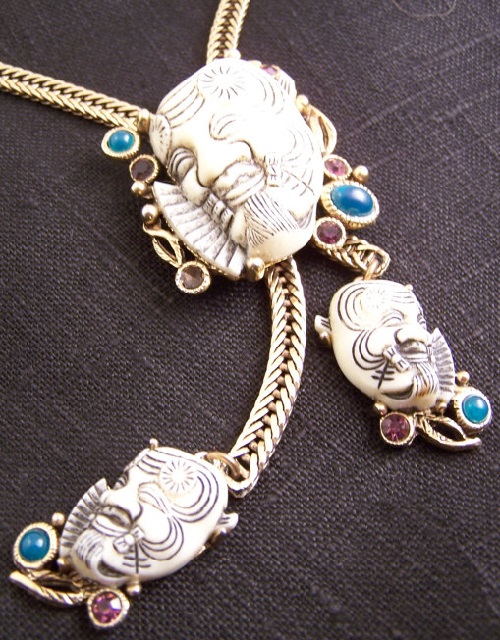 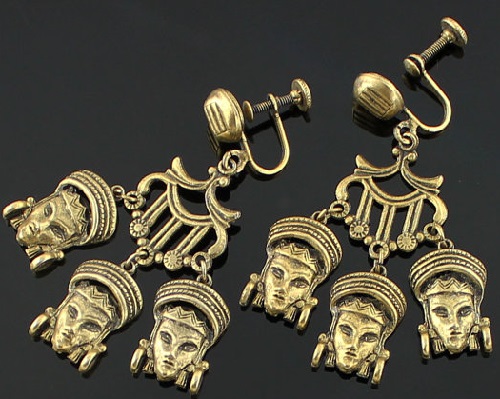 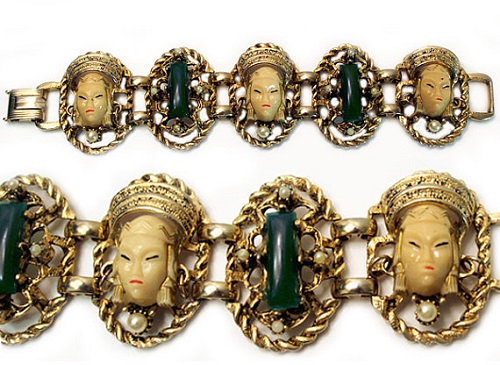 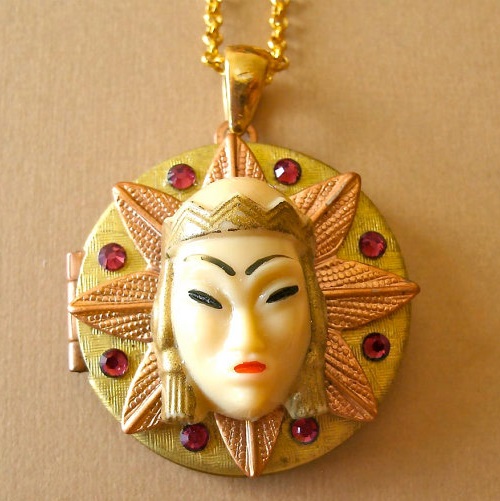 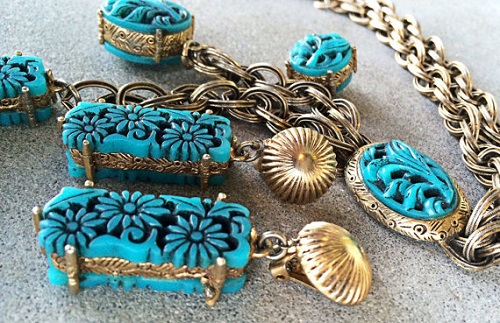 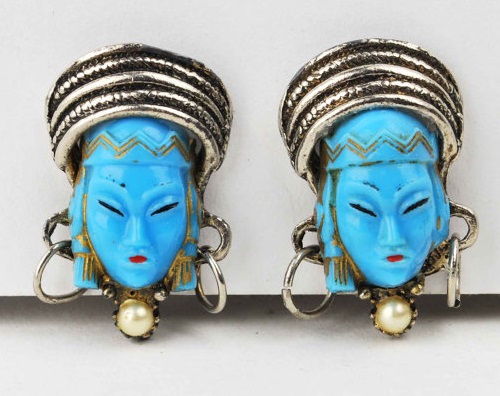 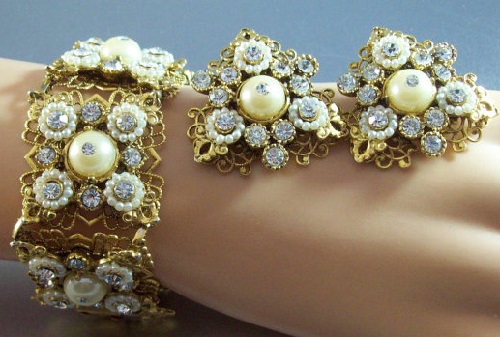 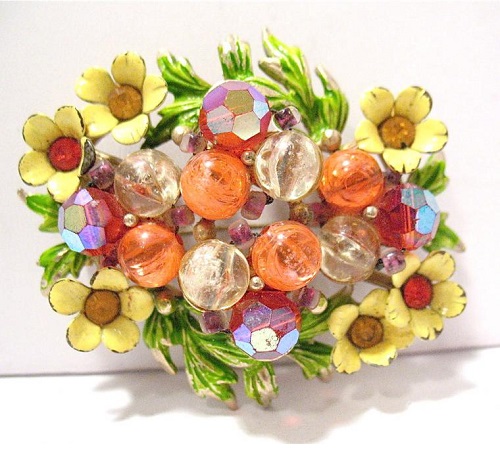 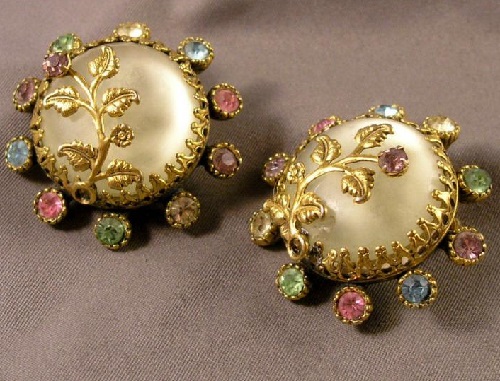 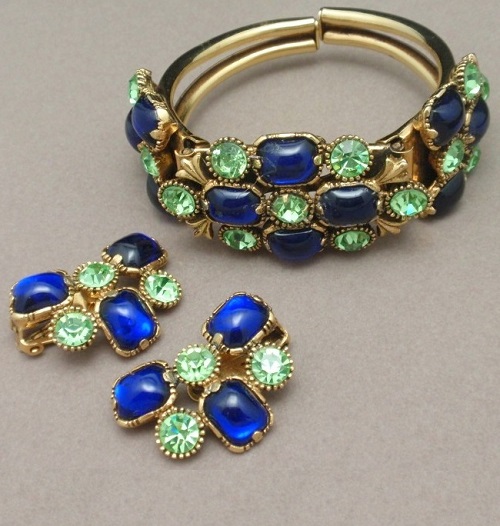 Set of bracelet and clips 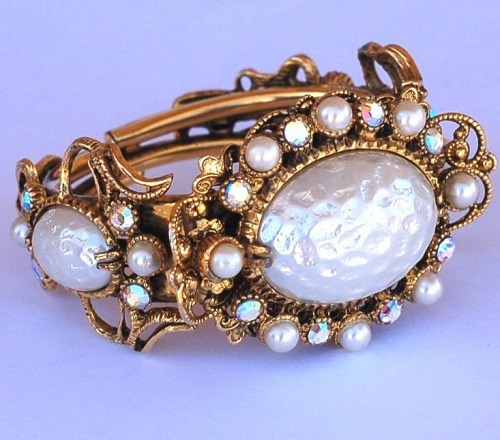 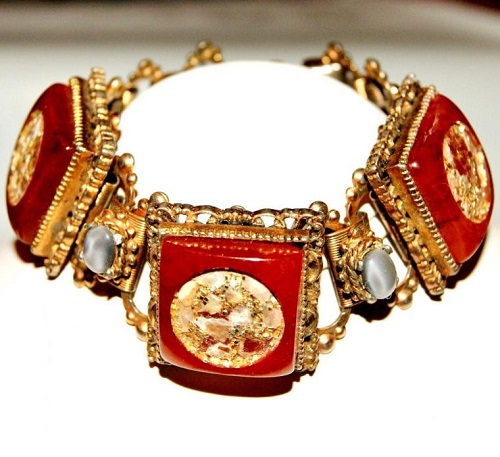 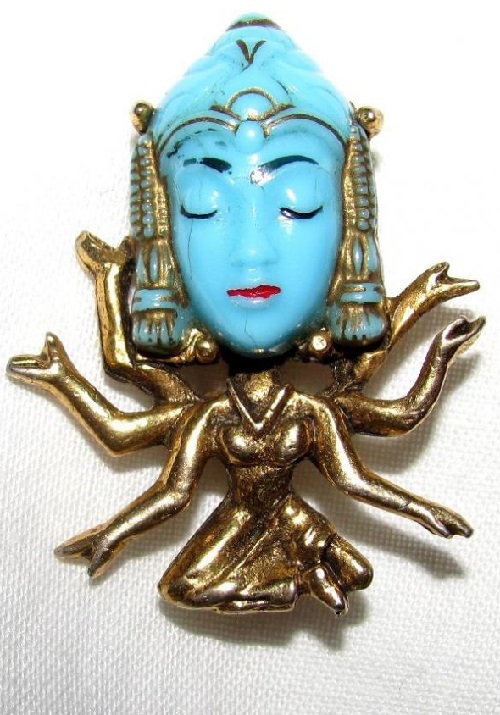 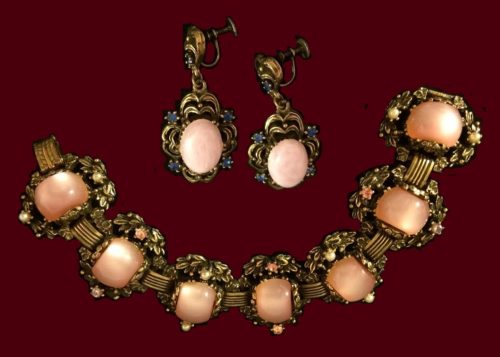