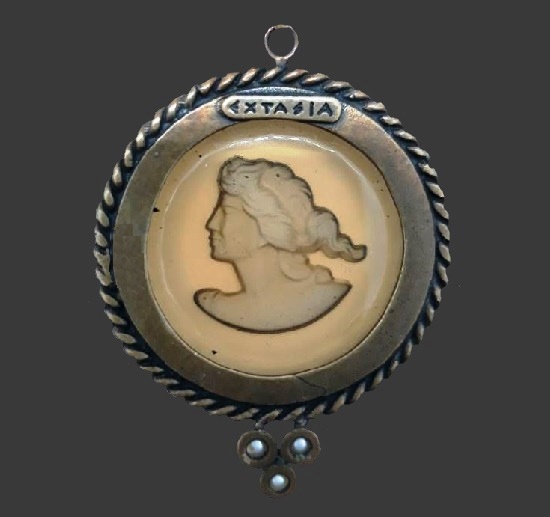 Extasia vintage costume jewelry
Located in Nevada City, California, Extasia Inc. has been operating jewelry business for 33 years. Founded by Stefanie Freydont in 1989, Extasia craftsmen create jewelry, using original old English and French designs. Based on the ancient technique of “intaglio” (glass carving), a dozen of Extasia make Victorian jewelry by hand. Traditionally, they use high quality red bronze, silvering and gilding for frames.
In her youth, Stefanie was trained blacksmithing in gold and silver and became an accomplished designer, winning awards for her student work while still in high school. Currently, 72-year-old Stefanie is still active living in Nevada City, CA, and hundreds of stores around the world, from the US and Europe to Japan and Australia sell her jewelry.
END_OF_DOCUMENT_TOKEN_TO_BE_REPLACED 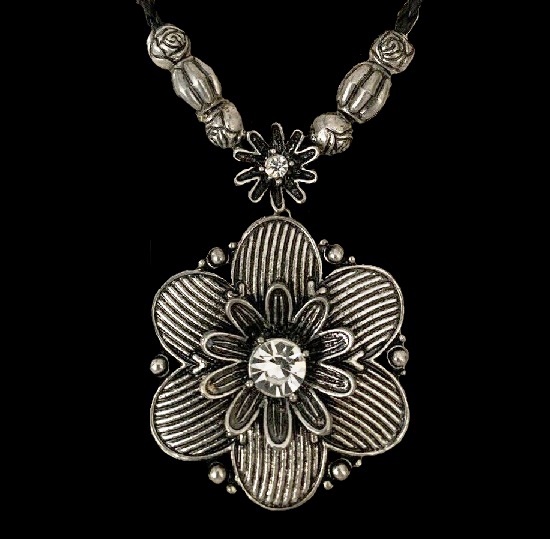 Bijou Brigitte vintage costume jewelry
The history of Bijou Brigitte’s costume jewelry brand began on July 8, 1963 in Hamburg, Germany, when 23-year-old Friedrich-Wilhelm Werner designed his first jewelry. Later, his wife Brigitte also made jewelry, helping to grow the family business. It was her name that Frederick included in the name of his company, registered in 1971. Initially, Bijou Brigitte modische Accessoires AG was engaged in the import and trade of fashion jewelry.
Today, the number of brand stores located in Europe has reached more than a thousand. The German quality of products and the French chic of durable and elegant jewelry made the Bijou Brigitte brand popular. It is noteworthy that the trademark Bijou Brigitte (general manager Bettina Diek) registered in the United States in 2006 ceased to exist in 2015.
Along with traditional materials – alloys of metal, pewter, silver and gold, the company’s craftsmen used ceramics, feathers, tassels and leather. The design of brooches, necklaces, bracelets and earrings is most often floral and geometric, made in a variety of styles – from ethnic and fashionable to vintage and boho.
One of Europe’s leading jewelry brands, Bijou Brigitte also manufactures accessories – glasses, scarves, belts, watches and bags for women, men and children.
END_OF_DOCUMENT_TOKEN_TO_BE_REPLACED 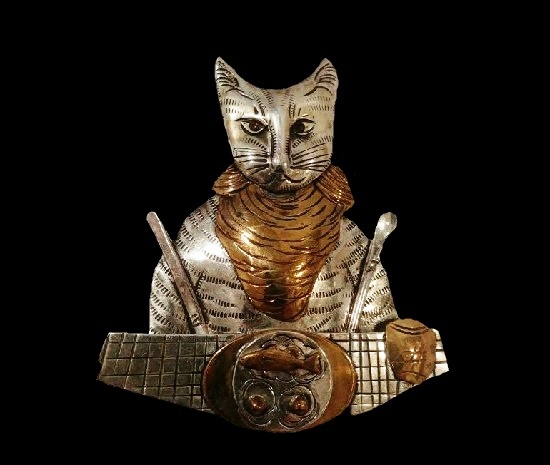 Courtney Design nature inspired jewelry
The history of nature inspired Courtney jewelry began thanks to a creative duo, Courtney Berry Peterson and her husband Lee Peterson. Founded in 1983 in Lincoln University, Pennsylvania, their company’s original name was Courtney Metal Design.
Courtney Berry Peterson grew up in New Orleans, Louisiana and taught English and French to high school students after graduating from the University of New Orleans.
Lee Peterson grew up in Old Lyme, Connecticut and, after graduating from Johns Hopkins University, wrote a reference book on edible wild plants.
They met in Louisiana, married a year later, and began making jewelry with animal and plant designs in the 1960s. Traditionally, jewelers use silver, brass, copper and gold. Made realistically, with the smallest elaboration of details, Peterson’s jewelry was a great success. Combining natural history and goldsmithing, these pins, pendants, bracelets and earrings have become highly collectible today.
Noteworthy the hallmark on the back side includes sterling, Courtney in script, SSB in script (sterling silver and brass).
Currently, 76 year-old Courtney B Peterson and 73 year-old Lee Peterson are still active, living and working with a small team of silversmiths in Lincoln University, PA
END_OF_DOCUMENT_TOKEN_TO_BE_REPLACED 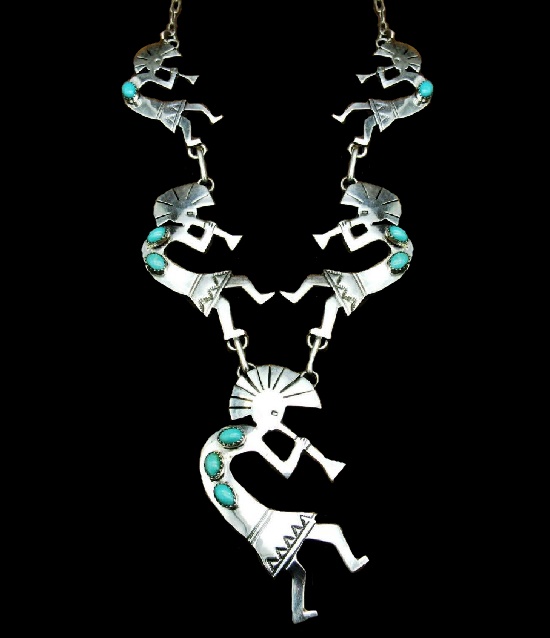 Ella Peter vintage silver jewelry
Born in 1943, Ella Peter is a prominent Navajo silversmith raised in Mentmore New Mexico. The girl began learning jewelry making very early, as her father was a silversmith who taught her the crafts. Noteworthy, only men could practice silversmithing, at least before 1920s. Later, Navajo women proved to be talented silversmiths as well.
By 1970 Ella Peter has already been an experienced master silversmith with her own views on design and with her own signature. Handcrafting her jewelry, Ella Peter used sterling silver and traditional for Navajo silversmith turquoise stone. Also, she used other multicolor natural stones – onyx, malachite, lapis lazuli and coral.
Ella Peter’s jewelry includes floral and animal motifs as well as geometric designs. In addition, the jeweler often used the folklore character Kokopelli – the god of abundance among the ancient Indian tribes. Jewelry with this symbol can be worn as a talisman, to attract wealth and fertility, and simply to fulfill the most secret desires. By the way, the alternative name of Kokopelli is the god of young families.
END_OF_DOCUMENT_TOKEN_TO_BE_REPLACED 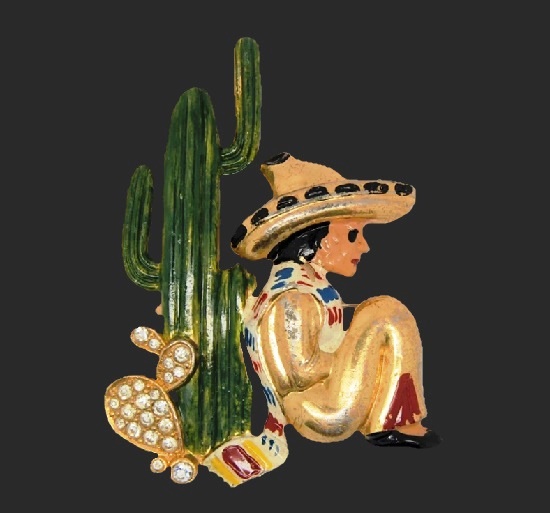 Bauman-Massa vintage costume jewelry (1935-1941)
The history of Bauman-Massa Jewelry Company began in St. Louis, Missouri, as wholesale jewelers, manufacturers and importers. Its founders were German born Samuel H. Bauman (1853-1933) and Edwin Massa (1848-1929). Incorporated in 1882, Bauman-Massa Jewelers’ Supply Co. changed name to Bauman-Massa Jewelry Company in 1895. The Bauman family sold the company in 1941. The new owner and president Catherine McCullar didn’t change the company’s name.
For 132 years of its existence, the company has launched three jewelry trademarks. In particular, Cardinal (1935 costume jewelry), Winsome (1976, rings) and Kate Mccullar (2001, diamond and gold jewelry).
Handcrafted in 1935-1941 under the direction of the Bauman family, these unsigned figural artisan pins are highly collectible today.
Inspired by South American nature, Indian and Mexican traditions, pot metal enameled ornaments have fabulous artisan design. Sold in branded department stores, BM ornaments were popular with both among jewelry lovers and tourists visiting South America or border areas. Indeed, Siesta, Mexicans in folk dress, cacti, coconuts, monkeys in palm trees and stubborn donkeys embodied in pins were a good souvenir of an exotic trip.
Unfortunately, one of the oldest American jewelry companies, Bauman-Massa Jewelry Co., ceased to exist in 2014.
The last owners of the company announced the liquidation of the company and its property, including jewelry, many of which the public saw for the first time in 2014.
END_OF_DOCUMENT_TOKEN_TO_BE_REPLACED 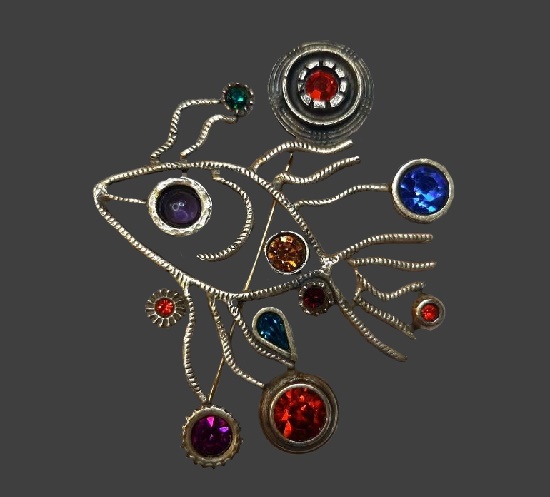 Patricia Locke vintage costume jewelry
American self-taught jewelry designer Patricia Agnes Locke (January 17, 1949 – February 19, 2015) began creating jewelry in 1971. Handcrafted with rich imagery and fine craftsmanship, her statement jewelry (originally made on commission) have become highly sought after. By 1980 she had successfully exhibited and sold her artisan jewelry through art galleries, boutiques and retailers.
Inspired by travels, ancient culture and architecture, her designs included asymmetrical geometry, marriage of metals, combination of natural stones and glass. Traditionally, she used 24 K gold, sterling silver, bronze, pewter, multicolor Austrian crystals and natural stones. She marked her jewelry pieces with “P. Locke USA”, or “Patricia Locke”, and a copyright sign.
Noteworthy, Chicago-based jeweler Locke founded her first jewelry company in Odessa, Texas. Incorporated in 1985, Patricia Locke, Ltd. (alternatively known as Patricia A Locke Incorporated) ceased to exist in 1989. She continued making jewelry in collaboration with other artists, until her death in 2015. She was 66.
END_OF_DOCUMENT_TOKEN_TO_BE_REPLACED 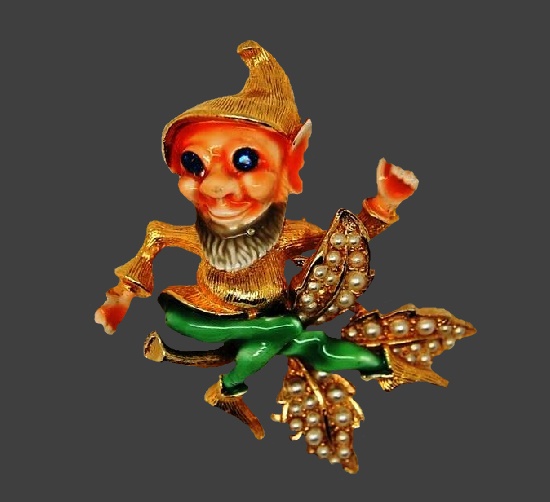 Signed CFW vintage costume jewelry
The history of CFW began as a jewelry line by Hargo Creations, founded in 1955 in New York. The successful family business of Joseph Heibronner and Edith Levitt ceased to exist after Joseph’s death in August of 1968.
Noteworthy, some sources mistakenly associate the abbreviation CFW with the name of the English couturier Charles Frederick Worth (October 13, 1825 – March 10, 1895). However, Charles was an Englishman who worked in England and France, and the second reason – the date of his life and death. That is, he could not have had anything to do with American costume jewelry in the 1950s and 1960s.
Although there is no record of either the CFW company’s registration or the CFW trademark, yet, it was a line of jewelry by the American company Hargo, known as HAR. There are at least three reasons. First, the identical designs of many enameled figural pins marked CFW and HAR. Secondly, the time of making jewelry marked CFW and HAR is 1950-60s. Thirdly, the same style and font of marking – capital block letters with a copyright sign.
END_OF_DOCUMENT_TOKEN_TO_BE_REPLACED