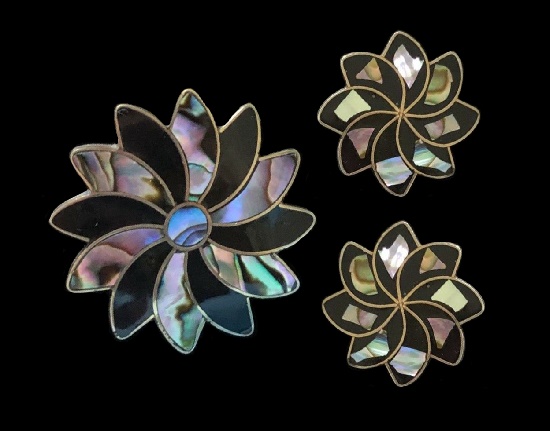 The history of LS jewelry trademark began more than forty years ago, when Los Angeles California based jewelry designer Lee Sands registered his company Lee Sands Inc. Officially registered in 1980, the company ceased to exist in 2003. In fact, Lee Sands (aka Lee Sandau) began creating jewelry long before founding his family business. It was “Honolulu Puka Shell Exchange”, the company registered in Honolulu, Hawaii in 1975.
Sandau original designs included wooden beads, puka shells, shimmering mother-of-pearl, semi-precious stones, sterling silver, metal alloys, and various natural materials.
Handcrafted from Hawaiian natural materials, his mosaic shell jewelry is unique. Besides, Lee Sands opened Hawaiian handicraft to the world through his enterprise. Actually, it was not jewelry pieces, but accessories that brought fame to the designer. In particular, eel skin leather, which he used for making organizer wallets in the 1980s. According to Lee, he travels the globe in the search of new, exotic sources for future jewelry.
END_OF_DOCUMENT_TOKEN_TO_BE_REPLACED 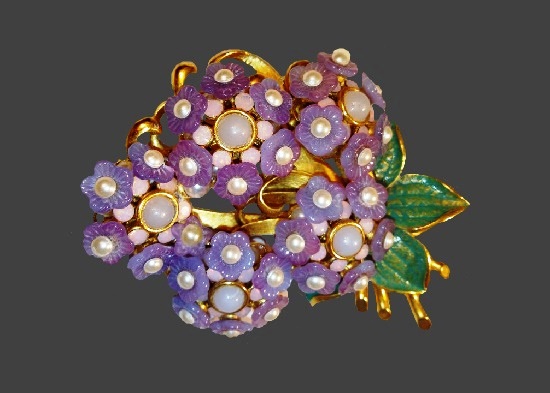 Barrera vintage costume jewelry
Located in the center of New York, Barrera Holdings LLC began its activity in 1981 and is still active. The founders of the company, Jose and Maria Barrera, have proven that costume jewelry can be truly top-notch. High quality workmanship, the use of 24 carat gold, Austrian crystals of a special cut, and art glass imitating precious stones. Their jewelry, including pieces created for Avon (1989 – 1996), has always been very popular. Traditionally, the company sells its jewelry on its website, as well as through top boutiques, including Neiman Marcus.
In fact, the history of Barrera’s jewelry business began much earlier, in the 1960s. It was then that a lucky case brought the actress from New York to Texas. Maria saw Jose’s very first jewelry piece at the University of Texas student art exhibition. The actress bought the necklace she liked and returned to New York to put it on to a party. There she was spotted by the famous photographer and art editor of Vogue magazine Alexander Lieberman. Lieberman asked for a piece for the photo shoot. The decoration inspired magazine editor Diana Vreeland so much that she commissioned another series of art photographs for the April 1970 issue of Vogue magazine.
This happy turn of events pushed Jose and Maria to start a new life and their family business in New York. Over time, their three daughters Larisa, Alicia, and Mariel joined the company, and the business expanded.

END_OF_DOCUMENT_TOKEN_TO_BE_REPLACED 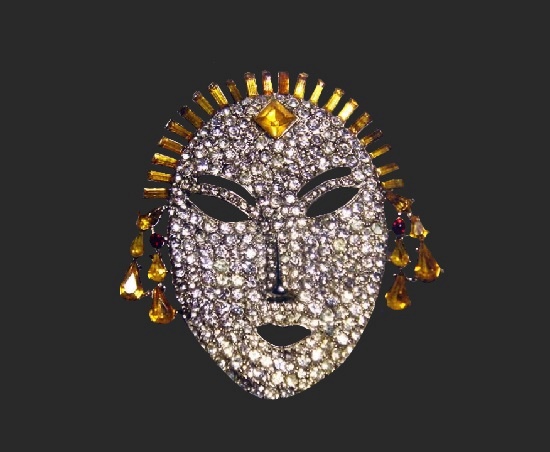 Joseph Wiesner vintage costume jewelry
Born in Germany, Jewish jeweler Luther Joseph Wiesner emigrated to the United States during the WWII, in the early 1940s. After settling in New York, Joe established contacts with local jewelers, and fulfilled orders for famous jewelry companies of the time.
However, one of the deals (in 1949), according to which he was supposed to make gold items for Genuth, led to fatal consequences. Weisner was charged with violating the Gold Reserve Act of 1934 and even fraud. Lawsuits that lasted from 1952 to 1954, ended with a two-thousand-dollar fine and even the arrest of Joseph. The successful costume jewelry business, which began at Fifth Avenue of New York City in the 1940s, ceased to exist in November 1954 in connection with the arrest of Wiesner.
Wiesner’s pieces are distinguished by their exquisite classic design, an abundance of sparkling Austrian crystals, reminiscent of Eisenberg’s pieces and are highly collectible. Product marking includes “Wiesner”, “Joseph Wiesner”, “Joseph Wiesner, N.Y.”, and «Astra». Lux class handcrafted costume jewelry was sold in gift cases with silk lining, like expensive fine jewelry.
END_OF_DOCUMENT_TOKEN_TO_BE_REPLACED 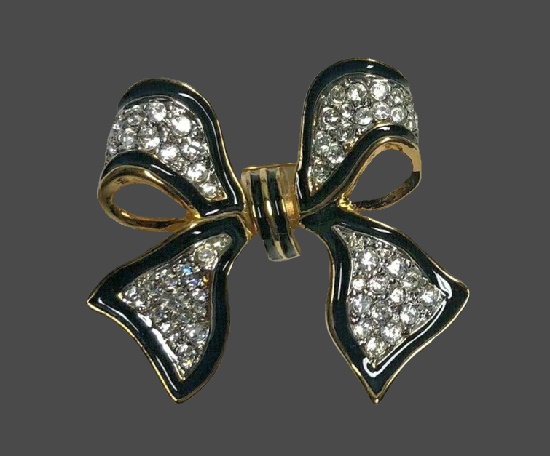 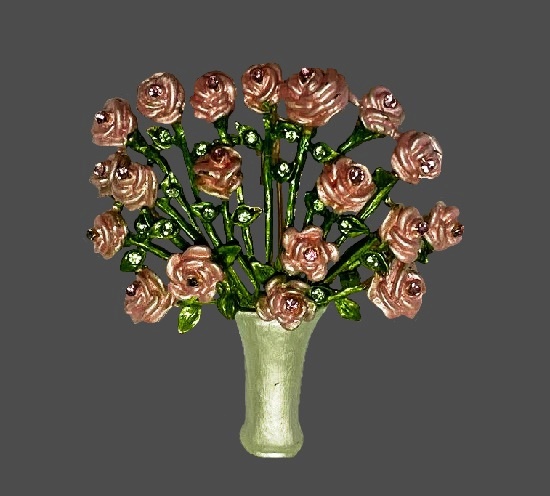 Signed L-S vintage costume jewelry
The history of L-S jewelry began in 1931, when New York, N.Y. based company Levine-Simson Inc, registered its trademark. The company manufactured costume jewelry for more than five decades, with short break during 1940s. The renewed trademark registered in 1947 and 1962, ceased to exist in 1988.
Vintage costume jewelry of this brand is distinguished by high quality workmanship, an abundance of rhinestones and gold-tone metal. Traditionally, the marking includes two capital letters L – C on a rectangular base, and without a copyright sign.
Noteworthy, decorations created by this company are often confused with other brands. And this is not surprising, since there are no less than ten trademarks with the same initials LS. In particular, LS Louis Stern, LS Lauren Spencer, LS Laurence Seegers (1973-1998), LS (Lee Sands) and even modern jewelry brands with the same initials. However, the style of marking of all these companies is completely different, not to mention the design.
END_OF_DOCUMENT_TOKEN_TO_BE_REPLACED 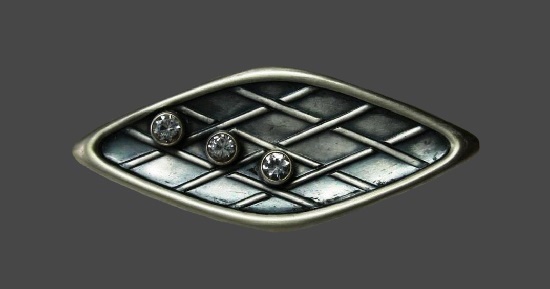 Kultaseppa Salovaara vintage silver jewelry
The largest precious metals companies in Turku operating in the 1960s and 1970s were Auran Kultaseppä, Kultateollisuus, Kupittaan Kulta, Turku Hopea, and more. There were also several smaller companies, many shops and workshops in the area. At its best, more than a thousand people worked in precious metals companies in Turku and won numerous international awards. One of these renowned companies was Kultasepät Salovaara (Kultasepät means goldsmith).
Finnish hereditary goldsmith Veikko Salovaara founded his family business Kultaseppa Salovaara in 1953 in Kaarina, neighbouring town of Turku. Among his ancestors, to name a few, were goldsmiths Markus Eliel Salovaara (1904 – 1993) and Armas Artturi Salovaara (November 19, 1883 – May 1, 1937).
Besides, most notable designers worked for the company, which in 1960-70s employed about one hundred silversmiths. One of them was Jorma Laine (1930-2002), who also worked for Hopea jewelry company. She signed her pieces with her name and added the company stamps. Noteworthy, Veikko Salovaara himself created his jewelry line under the name of Kalevi Sara.
Veikko Salovaara retired in 1988 and later sold his company.
Renowned and collectable, Salovaara handcrafted jewelry shows high quality and the use of silver, gold, bronze and natural gems. The marking includes the image of a Polar Bear on an Iceberg – the company’s logo, and traditional Finnish stamps. Among them – crown for Finland, letter and number for year (e.g. G7 for 1960, M7 – 1965, H7 – 1961, etc.), and the city mark for Turku.
END_OF_DOCUMENT_TOKEN_TO_BE_REPLACED 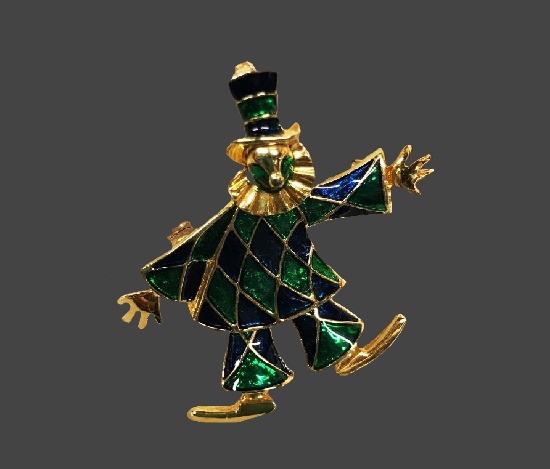 Signed H.I. vintage costume jewelry
Vintage pins, bracelets, pendants and brooches made by this company are extremely rare, and the history of the H.I. trademark is shrouded in mystery. However, it is known that the trademark existed for no more than a decade, in the period 1980-1990s. Noteworthy, this brand is related to the famous jewelry company “R. Mandle”.
Renowned hereditary jeweler Robert N. Mandle registered his own company “R. Mandle” in 1956 and owned the company until his retirement in 1990. He used to sell out his invaluable jewelry molds, which later appeared as brooches and pins signed by other manufacturers. Among them, in particular, was Providence based jewelry company which labeled its jewelry pieces with two uppercase letters H.I. (cursive fancy fonts), withought a copyright sign.
The quality hand-made costume jewelry of this brand dates back to the 1980s and is therefore considered vintage. In the manufacture of these figural pieces, craftsmen traditionally used gold-tone metal alloys, gilding, bright enamels and rhinestones. Also, the most notable design of this brand – multicolored clown pins handcrafted with articulated movable parts.
END_OF_DOCUMENT_TOKEN_TO_BE_REPLACED