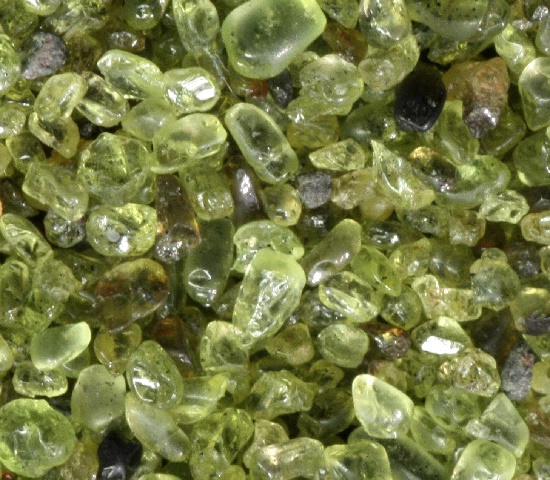 Hawaiian Olivine mineral rain
According to news, residents of Hawaii have witnessed an unusual phenomenon – a rain of green minerals. In fact, this exciting “kaleidoscope effect” happened due to the eruption of the Kilauea volcano. As a result, beautiful green translucent pebbles – olivine – fell from the sky.
Olivine, caused by the eruption, is a typical high-temperature mineral. Formed in igneous rocks, it is widely presented in the Earth’s mantle. Jewelry variety of olivine is chrysolite, by the way, quite rare in nature. Olivine is one of the most common minerals on Earth, and it is its presence that explains the greenish shade of some beaches, including Hawaii. According to some estimates, more than 50% of the Earth’s upper mantle consists of this mineral or its variations. Nevertheless, the olivine falling from the sky is a rather rare phenomenon.
On Kilauea, lava usually flows out slowly enough, only occasionally small, but sharp bursts occur. The sudden release of lava into the air led to the precipitation of olivine: its particles fell into the air and quickly crystallized.
However, this is not the first “miracle” accompanying the eruption of Kilauea. Earlier, near the volcano, eyewitnesses noticed a blue flame that appeared due to the accumulation of methane.
END_OF_DOCUMENT_TOKEN_TO_BE_REPLACED Coppola e Toppo vintage jewellery masterpieces
Originally, talented designers brother and sister Bruno Coppola and Lyda Toppo created the Coppola e Toppo company in the late 1940s in Milan, Italy. Interestingly, they produced their early works under the name of their favorite dog Mickey. Meanwhile, Parisian fashion houses Dior and Balenciaga used the company’s jewelry work in model shows and retail sales. This, of course, ensured the continued success of Coppola e Toppo in the next decade. In addition, the power of attorney received from Elsa Shiaparelli for the production of an artificial coral line called “Bijou Voyagers” made it possible for designers to show high professionalism. And large orders from such Italian couturiers as Gucci and Valentino, allowed to increase the number of works produced by the company under its own brand: “Made in Italy” Coppola e Toppo”.
END_OF_DOCUMENT_TOKEN_TO_BE_REPLACED As you know, vintage ornaments are those that are more than 20 years old, but usually not yet 80. And if older, it is already antiques. Along with the beautiful design of the jewelry, the most valuable are those that were produced in the middle of the 20th century and ceased to exist several decades ago. It is these decorations that are most desired for collectors and fans of vintage jewelry. In fact, to such rarities the products of the American company H.Pomerantz & Co. New York belong. All ornaments, mostly brooches, labeled “H. Pomerantz & Co. N.Y.,” “H. Pomerantz Inc. N.Y.,” “H. Pomerantz Co.” and “H. Pomerantz” – are the rarest to date. The brand H. Pomerantz Co, NY was in business between 1880 and 1940. Unfortunately, the company ceased to exist in the 1960s.
Noteworthy, the auction value for some of the works of this jewelry company now already reaches more than thousand dollars !!! Undoubtedly, the brooch studded with clear rhinestones, and in particular, H. Pomerantz Co is a luxurious gift for a woman of any age with the most demanding taste. Striking in design beautiful costume jewelry by the brand can be a perfect choice for your fall, winter and spring wardrobe.

END_OF_DOCUMENT_TOKEN_TO_BE_REPLACED Chrysoberyl cat’s eye favorable effects and properties
Ancient Indian mages used a chrysoberyl cat’s eye to understand the language of animals. Also, with the help of this mystical stone, they predicted the future. Besides, Indians believed that the cat’s eye brings luck to its owner in financial affairs and helps to win in gambling. Noteworthy, the stone very quickly “remembers” the energy of its owner and removes negative energy from him.
Meanwhile, cat’s eye has a general health effect, able to fight liver diseases, heal blood diseases, strengthen the nervous system and fight depression.
According to Lithotherapists, all minerals that have the effect of a “cat’s eye” act in the same way. But, depending on the color of the stone, these or other therapeutic actions are intensified or diminished. For example, the cat’s eye helps ease attacks with bronchial asthma. Some folk healers believe that these stones are a good tool for treating various diseases of the throat and respiratory system. In the countries of the East, there is an opinion that, by fingering rosary made from a cat’s eye, it is possible to significantly reduce nervous tension.
END_OF_DOCUMENT_TOKEN_TO_BE_REPLACED Arnold Isaacs Scaasi costume jewellery
Scaasi, in fact, is the inverted name of a Canadian fashion designer Arnold Isaacs (May 8, 1930 – August 3, 2015).
Born in 1930, the future fashion and jewelry designer Arnold Scaasi grew up in a furrier’s family. Of course, the boy often helped his father in his workshop. However, Arnold decided to become a designer after his trip to Australia to his aunt, who was a great fashionista.
Arnold Isaacs graduated from the School of Design in his native Montreal, and then enrolled in the Chambre Syndicale de la Haute Couture (Syndicate of High Fashion) in Paris. Then he worked at Paquin House, and finally moved to New York, at the invitation of the studio of the legendary designer Charles James.
Noteworthy, his clients were ex-first ladies Mami Eisenhower, Barbara Bush, Hillary Clinton and Laura Bush, Ivanka Trump, Princess Yasmine Aga Khan, and Baroness Wendy De Vere Austin. And of course, such actresses as Barbara Streisand, Elizabeth Taylor, Catherine Deneuve and Joan Crawford. To the admirers of his talent, Arnold dedicated the book “Women I Have Dressed (and Undressed!)” . According to the designer, clothes with jewelry decorations look more interesting and more interesting to wear.
END_OF_DOCUMENT_TOKEN_TO_BE_REPLACED Gold coin with the image of the symbol of 2018. Jewellery decorations to meet the Yellow Earth Dog

Jewellery decorations to meet the Yellow Earth Dog
Indeed, what is the best choice for meeting the main winter holiday – New Year’s Day? According to Chinese horoscope, the new 2018 belongs to the yellow earth dog. However, the very New Year’s day still belongs to the Red Rooster. So, you should respect both signs. Sunny colors and glitter of gold, jewelry and accessories should not be screaming. Meanwhile, the very combination of color and the elements of the future symbol of the year implies their presence, especially on New Year’s Eve. In short, in the priority – jewelry from gold.
END_OF_DOCUMENT_TOKEN_TO_BE_REPLACED