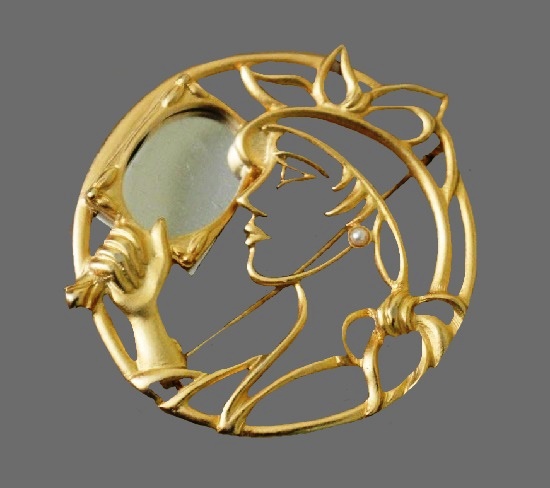 Signed Tona vintage costume jewelry
Located at 182 Butler Avenue, Providence, Rhode Island jewelry company Tona Inc. was registered more than 40 years ago, 21 April 1980. The company ceased to exist 13 February 2015, according to official records. Its owner and president, Anthony E. Angeli (born 1939), has already had rich experience in jewelry design and business long before the founding of Tona.
Anthony began his jewelry career in 1956. First, he worked as an assistant of Helen Marian, the head designer of Vendome jewelry line, creating costume jewelry for Coro Inc. In addition, he studied the art of jewelry making at Rhode Island School of Design and model making courses. After training, he left Vendome, although he maintained a close relationship with Helen Marian until her death.
END_OF_DOCUMENT_TOKEN_TO_BE_REPLACED 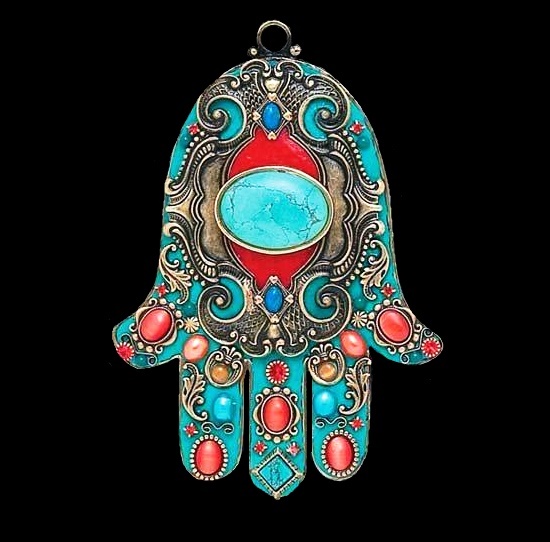 Hand of Fatima Hamsa symbolic jewelry
Once, the husband of Fatima (the daughter of the Prophet Muhammad) brought home his second wife. He introduced her to his wife when Fatima was cooking halva on the fire. Having received a blow to the heart, the girl dropped the spoon. She began to stir the boiling halva with her hand further, not feeling pain. Fatima’s heartache was stronger. Ali (her husband), struck by his wife’s worries, abandoned his intention. He remained faithful to his wife until the end of his days.
Archaeological evidence suggests that the downward-facing hamsa was used as a protective amulet in the region even before it was used by adherents of monotheistic religions.
In Judaism, Hamsa is associated with the five books of the Torah. Noteworthy, this is a common symbol in both Jewish and Muslim communities. Traditionally, in Jewish communities they call it the Hamsa Hand or the Hand of Miriam, while in Muslim communities it is the Hand of Fatima or the Khamsa.
Also, Hamsa in Hebrew and Arabic means five, and equally best known for the power to protect the owner from the evil eye and bring happiness to the holder.
END_OF_DOCUMENT_TOKEN_TO_BE_REPLACED 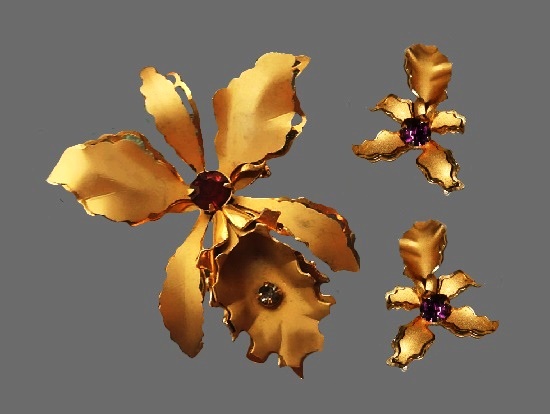 Bugbee & Niles BN vintage costume jewelry
The history of the American brand Bugbee & Niles began in 1859 in Providence, Rhode Island. The antique jewelry of this company, which had been creating costume and fine jewelry with short interruptions for 160 years, is now a collector’s item. These breaks were due, among other things, to economic and political problems in the world. For example the Great Depression and the Second World War (the company ceased operations in 1943). However, it was constantly reviving and was active until 1992. Noteworthy, the Bugbee & Niles Company Trademarks registered several subsidiaries in the 1980s. In particular, Diamonglo (filed April 6, 1981), Diamonray (June 15, 1981), Diamonart (March 1, 1982) and BN (filed March 5, 1984, canceled 4 November, 1992).
Traditionally, creating jewelry, the company’s designers used gilding and silver plating, as well as crystals and rhinestones, and sometimes enamel. The markings include the initials B.N., or less commonly B&N.
END_OF_DOCUMENT_TOKEN_TO_BE_REPLACED 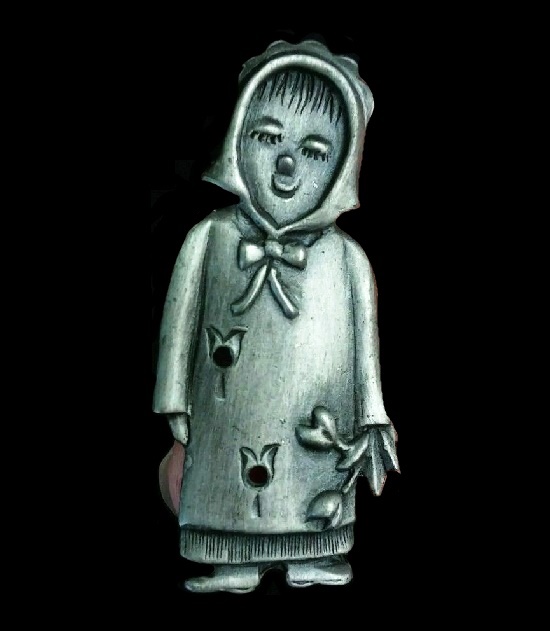 Torino vintage costume jewelry
Original vintage set three in one – brooch, earrings and pendant, made by American company Torino, founded by Gerald Glynn in 1969. Such fabulous jewelry sets were the feature that set this company apart from others. Traditionally made from pewter, the sets included a brooch – a box on which earrings were attached and inside the box was a pendant with a chain. There are several design options for this line of jewelry. In particular, the flower girl, the family of dolphins, dogs, rhinos, pigs, ducks, hummingbird, cowboy boots, the moon and stars. Noteworthy, such jewelry transformers made of pewter or an alloy of metals two in one, or three in one were produced only by the Torino brand.
In addition to transformers, the company produced traditional costume jewelry from metal alloys, brushed or matte gold, silver tone with the addition of imitation pearls, rhinestones, and enamel.
The company ceased to exist in 1992.
END_OF_DOCUMENT_TOKEN_TO_BE_REPLACED 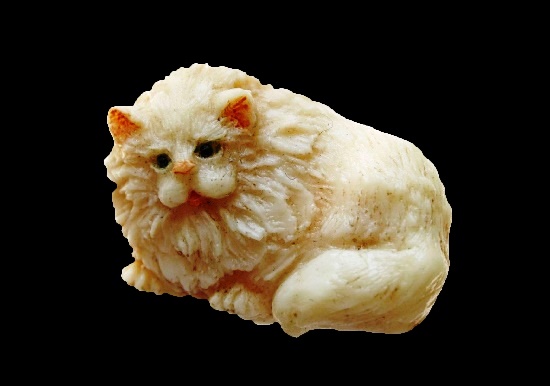 Sylvia Bennett vintage costume jewelry
American artist Sylvia Bennett (Nov. 5, 1939 – Feb. 29, 2008) created a series of polymer jewelry in the 1980s that later became collectible rarities. These were mainly figurative brooches in the form of Storyland characters, teddy bears, cats, kittens and other animals. Crafted from resin, hand painted and lacquer finished, these brooches were voluminous and made with such attention to detail that they look as alive. In general, all animals in this series have their own, pronounced character.
Traditionally, the designer labeled her pieces “Sylvia Bennett Raven”. Raven was the name of her home studio where the artist worked. Rare brooches with collectible value due to their high quality have been perfectly preserved to this day.
A bright and hardworking student, Sylvia studied art at the University of New Hampshire. Also, her studies included one year in Denmark. She began working as a graphic designer for McCalls in New York City. In 1965, she got married to Richard Merk, and by 1968, they had three children.
END_OF_DOCUMENT_TOKEN_TO_BE_REPLACED 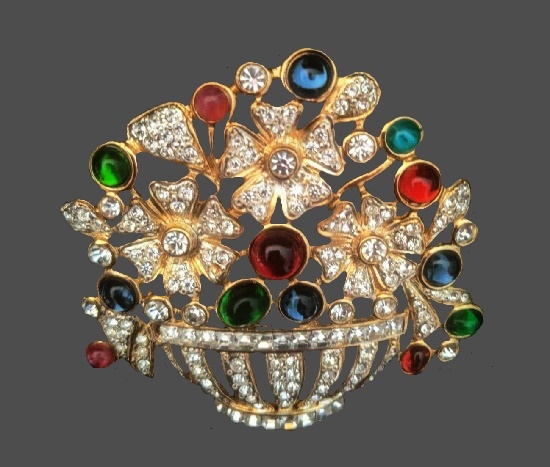 MV Vellano vintage costume jewelry
The history of an Italian high-end costume jewelry line “MV Vellano” lasted no more than a decade, from the late 1970s to the 1980s. A confident, optimistic woman of the 1980s did not need to confirm her status with expensive decorations, preferring costume jewelry. Besides, the 80s statement jewelry went well with large sunglasses, bright and contrasting silk scarves. It was during this period that the work of many European jewelry companies and, in particular, Italian companies, met the demands of the time.
Noteworthy, the products of MV Vellano are very similar to other Italian brand Vogue Bijoux, as they had one owner. The designers of these companies created high quality haute couture jewelry luxury for upscale shops and boutiques.
Traditionally, they used 18kt gold-plated metal alloys, pavé Swarovski crystals, glass cabochons, lucite, and enamel. Undoubtedly, high-end design, best materials and high quality workmanship made these items collectible.
Both Italian companies Vogue Bijoux and MV Vellano are no longer in operation.

END_OF_DOCUMENT_TOKEN_TO_BE_REPLACED 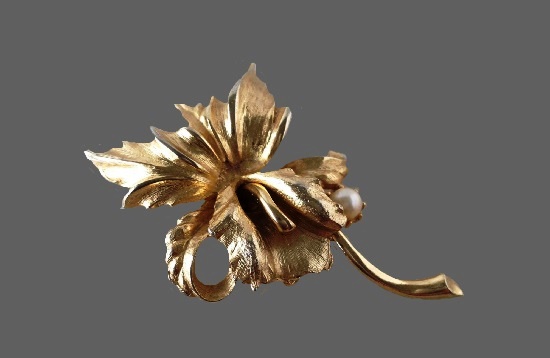 Signed Lee Co vintage costume jewelry
The 3D effect gilded orchid flower looks incredibly vivid and delicate. The brooch is large enough not to be unnoticed, yet stylish and feminine. Every petal curve, every transition from brushing to polishing is carefully thought out and verified. A small pearl is the finishing touch to this jewelry perfection. Thanks to the high quality of materials, gilding and the craftsmanship of the designers, the vintage jewelry of this brand has maintained excellent condition. In this floral collection from the mid-60s, the company released several floral and plant brooches that are now collectible rarities. In particular, rose, chrysanthemum, palm branch, as well as floral motifs in the form of wreaths and figurative decorations in the form of animals.
Each product of this company bears a distinct “Lee co.” mark with a copyright sign.
Unfortunately, there is practically no information about the company, except that it worked in a short period 1950-1960s. Traditionally, craftsmen made jewelry by hand using gold plating, faux pearls and rhinestones.
END_OF_DOCUMENT_TOKEN_TO_BE_REPLACED