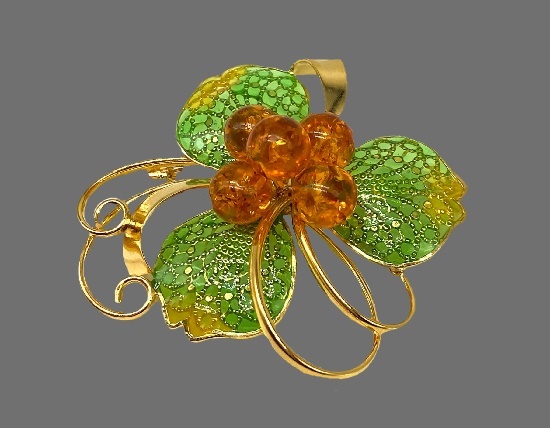 Japanese Vintage – Kuji Amber jewelry
Traditionally, we associate amber with the Baltic Sea. However, Japanese amber is at least twice as old as Baltic amber. Found in Japan, these semi-precious stones are about 80 million years old. The seaside city of Kuji, located in the northwest of the island of Honshu, is called the Japanese capital of amber. The color shades of Japanese amber are quite varied and differ from the Baltic amber. Yellow and transparent stones are quite rare. More often, amber has orange, dark yellow and brown shades, and even beautiful striped amber that looks like agate. Interestingly, in the Middle Ages in Japan, red amber was especially highly valued, which symbolized the blood of the dragon. Only members of the imperial family could wear jewelry made of red amber.
There are many awarded notable artists and jewelry designers who work with amber. In particular, Wataru Zama, Hiromi Ito, Takenori Moriyama, Yuji Okado, Osamu Omori, Masaaki Sakaguchi, Yasunori Sakamoto, Nobuko Takagi, Misao Uchida, Noriko Hasegawa, and Koichi Yamazaki.
In the past, in this area there were several old schools of amber processing, which were famous throughout Japan. Since 1981, the Kuji Amber Museum Co., Ltd. has been reviving the historical traditions of Kuji-kohaku by decree of the Japanese government. The owner of the museum is a local company Kuji Kohaku. Kuji products – earrings, pendants, brooches, bracelets, watches and pens with amber inserts can be purchased both throughout the country and at the place of production.
Noteworthy, items marked with the word “KUJI” are rare, as Kuji Amber Museum only marked the first jewelry collections.
END_OF_DOCUMENT_TOKEN_TO_BE_REPLACED 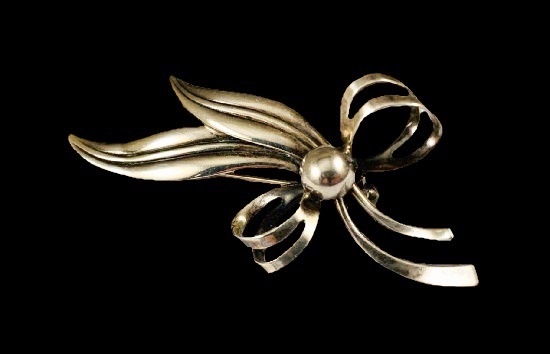 Hermann Siersbol vintage silver jewelry
Highly regarded silversmith, jewelry designer Hermann Siersbøl could have created more than one masterpiece of wearable art, if not for his tragic death at the age of 40.
Born January 24, 1924 in Copenhagen, after leaving school he studied to be a jeweler, and worked as an apprentice for silversmiths. After earning his start-up capital in 1945, he began creating inexpensive handmade jewelry from a variety of materials. Moreover, it was post-war Europe, where women wanted to wear affordable high-quality jewelry. Thanks to his idea to make good jewelry affordable for everybody, his company gradually became one of the largest in Scandinavia.
Keeping the traditions of Scandinavian silversmiths, Hermann created jewelry in a variety of styles, including avant-garde, modernist, geometric and classical designs. Traditionally, he used sterling silver, gold plating, semi-precious stones, and akoya pearls. Noteworthy, his hallmark included “HS” and 830, or sterling 925, Denmark H.S. on oval base.
After the death of the designer on 30th July 1964, his four children continued their father’s business. According to sources, his son Henrik and granddaughter Camilla headed the company in 2010s.
END_OF_DOCUMENT_TOKEN_TO_BE_REPLACED 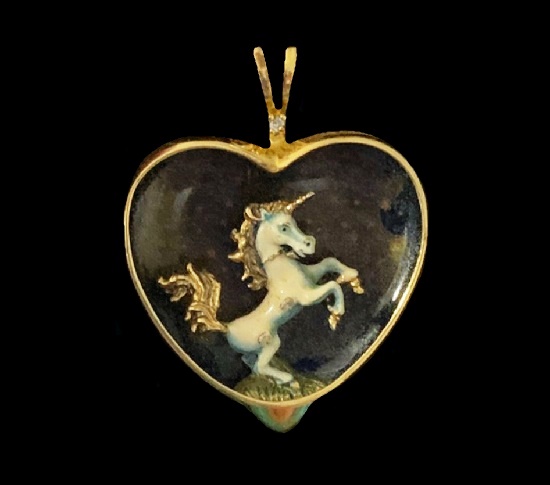 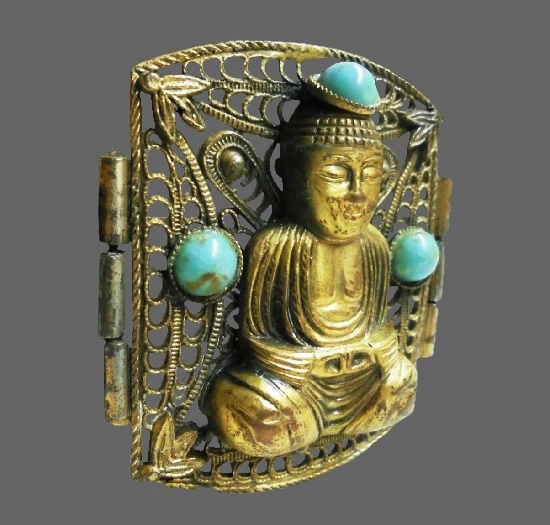 Gray Kingsburg vintage costume jewelry
New York-based jewelry designer Gray Kingsburg worked between WWI and WWII, including the Great Depression, 1920-40. Accordingly, the style of his jewelry has undergone many changes in a short period. At the beginning of his career, these were decorations in the Art Deco and Art Nouveau styles, with the use of natural stones and gold plating. Already in the 1930s, due to a downturn in the economy and limited use of precious metals, the designer used brass, copper and alloys of gold and silver tones to compensate for the shortage of gold and silver. Also, the designer used multi-colored art glass imitating precious stones. A distinctive feature of his designs is exquisite filigree handwork, embodied in bracelets, brooches, necklaces, buckles, and dress clips.
Gray Kingsburg, like many other jewelers of the period, drew inspiration from exhibits in various museums and vaults around the world, creating a line of jewelry with Buddhist and Indian motives. Kingsburg’s exquisite filigree jewelry is a collectible rarity in the vintage jewelry market.

END_OF_DOCUMENT_TOKEN_TO_BE_REPLACED 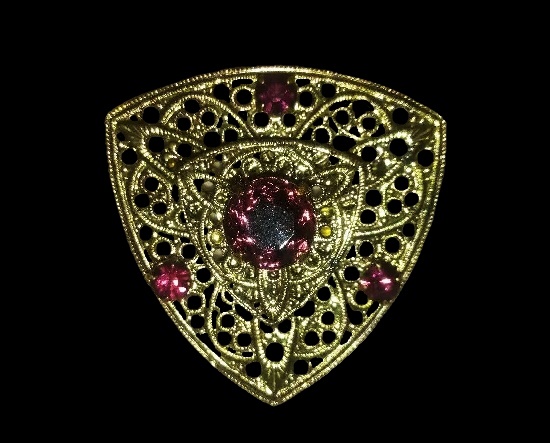 Discovery vintage costume jewelry
The history of Discovery jewelry trademark began in 1973 and ended before 2000. The trademark owner was Oak Patch Gifts Limited Liability Company (founded in 1973) based in Eugene, Oregon. The company, in addition to Discovery, had four more jewelry trademarks. In particular, Monarch Inspirations, M+M Mixmatch, Sugar & Spice, and Arabella. Also, the company registered eight trademarks on production of various goods – from kitchen utensils and umbrellas to shoes and clothes.
The markings on the back of the pieces include the word Discovery, written in a semicircle in small stylized letters. Usually products were sold on branded cards with the word Discovery written in gold letters.
Noteworthy, there was a similar jewelry trademark Discovery of California, which was active from 1975 to 2000s. Also, Discovery was a trademark registered by Los Angeles corporation Empress Pearls, Inc. in 1974. The marking on each jewelry piece included the word DISCOVERY in capital letters. Discovery jewelry trademark ceased to exist in 1981. Empress Pearls, Inc. in addition to Discovery, has registered 41 trademarks, including jewelry ones. In particular, Driftwood, Imagination, Sophistication, Pearl’n Shell, and Pearls’n Swirls (all 1974-1981); Slendrella, The Bold One, Wild Flowers, Mr. VIP, King’s Crown, and Twiggy (1975-1982).
END_OF_DOCUMENT_TOKEN_TO_BE_REPLACED 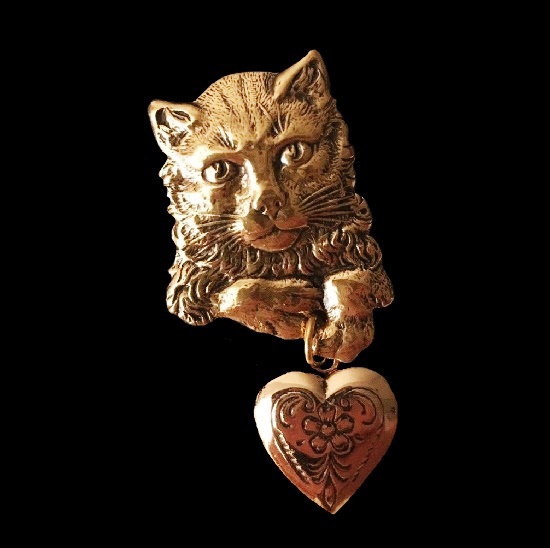 Discovery of California vintage costume jewelry
The history of Discovery Jewelry Company began on July 30, 1975 in California. It was a Domestic Corporation located at 325 M Sharon Park Dr Ste 218, Menlo Park, CA 94025, headed by its president Gail Burke. The company manufactured handcrafted costume jewelry with the use of gold and silver tone metal alloys. Most famous are their pet, heart and musical instrument designs implemented in pins, earrings, pendants, charms and bracelets. Traditionally jewelry was sold on hallmarked cards, with printed on them in gold or silver color “Discovery of California” and a lily flower. Some pieces, however, have the same marking on the reverse.
Discovery Jewelry Company went out of business in 2001, and Gail Burke has registered another company Gail Burke & Associates, Inc. on 13 Aug 2001, which is still active.
Noteworthy, around the same time, there were two Discovery brands for costume jewelry in the United States. In particular, Discovery by Oak Patch Gifts Limited Liability Company (founded in Eugene, Oregon), and Discovery by Empress Pearls, Inc. However, both of these companies are not affiliated with Discovery of California.
END_OF_DOCUMENT_TOKEN_TO_BE_REPLACED 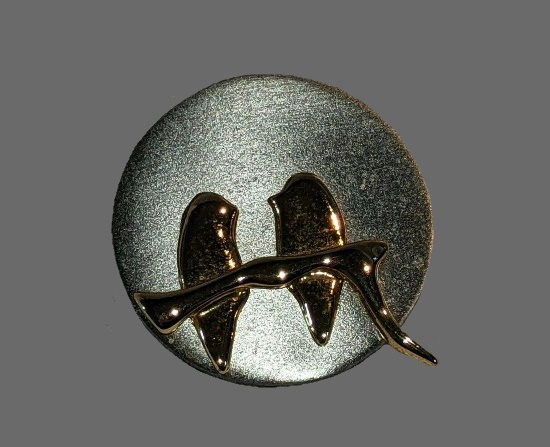