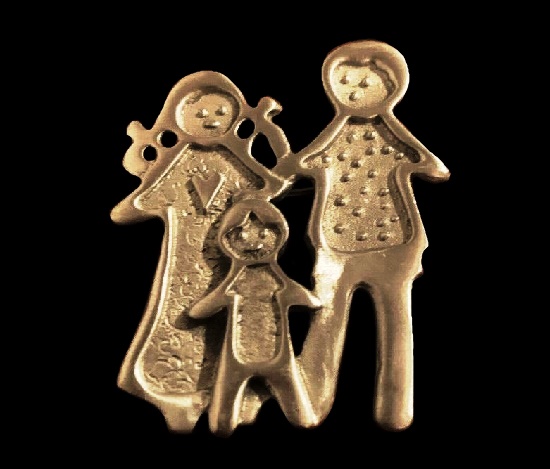 American jewelry company Cynthia Webb Designs Inc. began its activity as online and retail store in 1992. Its founder is San Diego California based artist Cynthia Webb. Her inspirational designs feature traditional values – family, love, religion, mercy, and support for those in need. Made by hand, each ornament is unique. Noteworthy, a characteristic feature of her work is that the pattern and details are visible on both sides of the jewelry. In addition to maker’s mark, most pieces have a message written on them. For example, “connected by Love”, “Perfect Union”, etc.
Initially, the company manufactured various gifts and ornaments made of pewter and wood. In particular, wall plaques, holiday ornaments, key chains, decorative crosses, dishes, decorative nativity scenes, figures, and other items. Also, the company’s artisans handcrafted jewelry decorations made of fine pewter, shell, amber, mother-of-pearl, and plastic.
END_OF_DOCUMENT_TOKEN_TO_BE_REPLACED 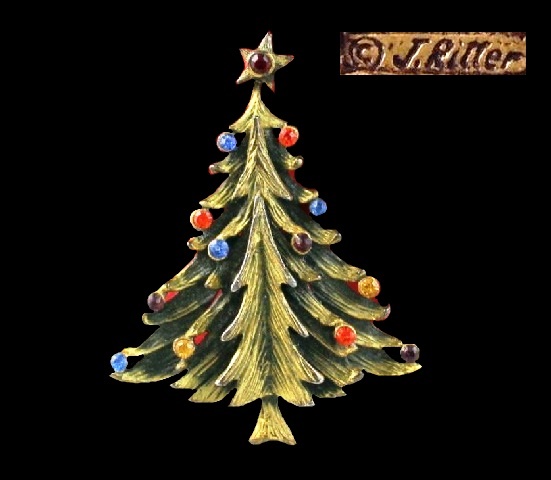 Signed J Ritter vintage costume jewelry
Phoenix Arizona based jewelry company J. Ritter Co. was a family business of John Ritter (1916-2004) and his German born wife Margaret K. Ritter (died 2011). Married in 1943, the couple settled in Schenectady, NY.
John Ritter worked for the renowned Eastman Kodak Co. for the production of everything related to photography. However, they both decided to move to Scottsdale, falling in love with the desert landscapes of the southwest. It was there that John and Margaret founded their company J. Ritter. The business was very successful and the company supplied jewelry to the largest stores in the Southwest for two decades.
Founded in the 1960s, the company ceased to exist in the early 1980s. Traditionally, the company’s craftsmen used metal alloys, as well as gold, silver, crystals, and art glass imitating precious stones. The markings on the back of the products include the full name of the company J.Ritter and a copyright sign. John had registered patents for nearly all of his designs, according to the official US Patent Office newspapers of the 1960s and 1970s. Most notable of them were Roadrunner and Cactus pins patented in 1965.

END_OF_DOCUMENT_TOKEN_TO_BE_REPLACED 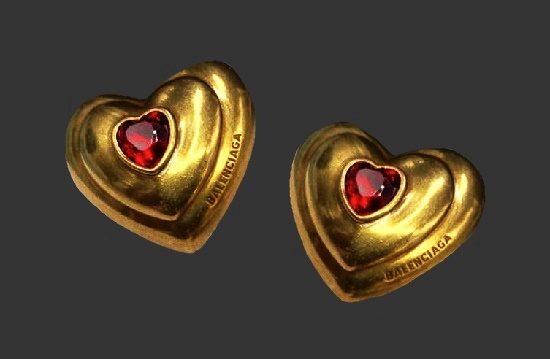 Balenciaga vintage costume jewelry
Founded by the Basque fashion designer Cristobal Balenciaga (1895-1972), Balenciaga is a legendary fashion house with a century of history. Noteworthy, known in future as Coppola e Toppo jewelry company, Italian brother and sister Bruno Coppola and Lyda Toppo, created jewelry for Balenciaga in the 1940s. Cristobal ended his career in 1968 and closed fashion houses in Paris, San Sebastian and Madrid. However, after his death, his fashion house continued to exist, having gone through a change of owners. Thus, the production of ready-to-wear clothes, perfumes, and accessories under license continued.
At one time, many of the designers who worked at the Balenciaga house later opened their successful fashion houses. Among them, in particular, were Oscar de la Renta (1949), André Courrèges (1950), Emmanuel Ungaro (1958), and Hubert de Givenchy.
Traditionally, most Parisian fashion houses of the 1980s created bijoux for their shows, as well as for the release of perfumes, or for opening boutiques. And Balenciaga was no exception. Although the history of Balenciaga jewelry began in the 1950s, yet, officially it lasted no more than two decades, from 1981 to 2003. Paris-based company Balenciaga, S.A. registered 2 trade marks of the same name – for the production of glasses and accessories in 1976, and for the production of luxury costume jewelry in 1981. Authentic Balenciaga matte gold plated jewelry, so characteristic of 1980s French luxury costume jewellery, are very collectible now.
Noteworthy, such well known jewelry companies as Maison Gripoix and Orena Paris made jewelry for Balenciaga.
END_OF_DOCUMENT_TOKEN_TO_BE_REPLACED 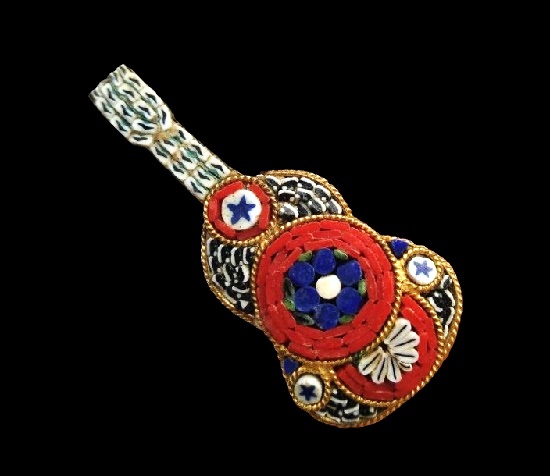 Italian micromosaic vintage costume jewelry
The original design, made of tiny pieces of high quality Italian glass or smalt, is a micro mosaic. Widespread in the eighteenth century, micro mosaics reached their greatest peak in popularity during the work of the Vatican Mosaic Workshop.
Mosaic master Giacomo Raffaelli (1753-1836) once invented a silica composition that allowed him to stretch a thread and transform it into miniature bricks. It was from them that he began to make his products, and mainly for the Vatican. Traditionally, the master painted the glass in a special way, and then pulled it into thin straws and cut into millimeter cubes. Then he manually laid out these pieces in a certain mosaic sequence, creating a beautiful multicolor, and usually floral ornament. The basis was important – the special composition of the glue, which, when hardened (within two days), acquires the properties of a stone. Of course, handcrafted micromosaic pieces are almost impossible to repeat.
Noteworthy, there are three main types of Italian micromosaics. In particular, Roman, Venetian and Florentine.
The earliest type is Roman mosaic, which is the use of very small pieces of colored glass (tesserae). These decorations, presented in the form of oval or round brooches, sometimes in the form of guitars, crucifixes or mandolins, are truly works of art.
Venetian design is characterized by the use of various forms of glass tiles, with which the craftsmen made decorations.
In Florentine design, craftsmen used pietra dura (hard, natural stone), which they carved, and then assembled. Besides, they used black marble as the basis, therefore, the background of almost all decorations was black.
END_OF_DOCUMENT_TOKEN_TO_BE_REPLACED 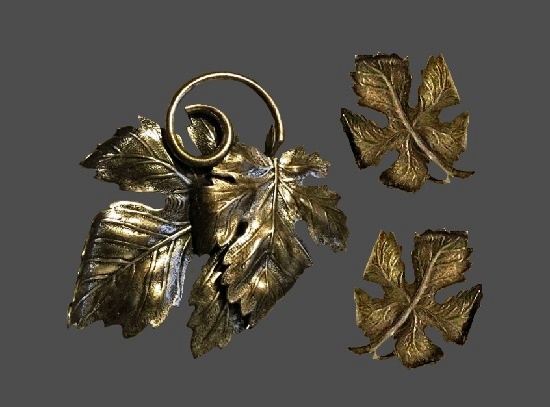 Signed Bartek vintage costume jewelry
The history of the Bartek jewelry brand began in Connecticut in the early 1940s and lasted no more than two decades. It was the family business of Stephen R Bartek Jr (1912-1995) and his wife Frances (1911-1999). Living in Wallingford, New Haven County, the Bartek family had six sons – John, Robert, Steven, William, James and Richard. The founder of the company himself, Bartek Jr was the son of a blacksmith and learned the craft from his father, having decided to become a jeweler at a young age.
Noteworthy, in the late 1930s he already worked for the famous Napier jewelry company, which is confirmed by archival documents. According to them, Bartek was on the list of hired silversmiths. Thus, Bartek gained valuable experience in jewelry making, which allowed him to start his own business.
He set up his own workshop and opened a jewelry store in the early 1940s. Bartek led the company at least until the 1960s. One of the confirmation of this is the document of the Supreme Court of the State of Connecticut in 1955, where Bartek was the defendant as the owner of the company.
Handcrafted, high quality, stylish and rare, Bartek jewelry is collectible.
END_OF_DOCUMENT_TOKEN_TO_BE_REPLACED 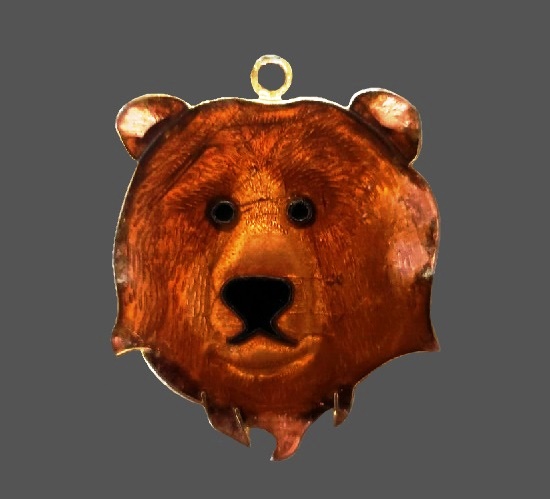 Wm Spear Design vintage costume jewelry
The history of the American jewelry brand Wm Spear Design began 36 years ago in Juneau, the capital of Alaska. Its founder, William Speer, is still running his business, and his boutique offers unique art for those who want something meaningful to remember their trip to Alaska.
Noteworthy, Spear has created about 900 designs inspired by nature, history, and culture. These high quality handcrafted icons and portraits, pins and pendants have become collectibles. Beautifully packed in a branded box with a logo in black and gold, with an informative postcard, any piece of jewelry can be a wonderful gift.
The materials traditionally used by the designer are copper, multi-colored finest enamels, and gold. The markings on the back of each item include the full company name and year of manufacture.
Officially registered in 1985, the Wm Spear Design trademark ceased to exist in 2016.
END_OF_DOCUMENT_TOKEN_TO_BE_REPLACED 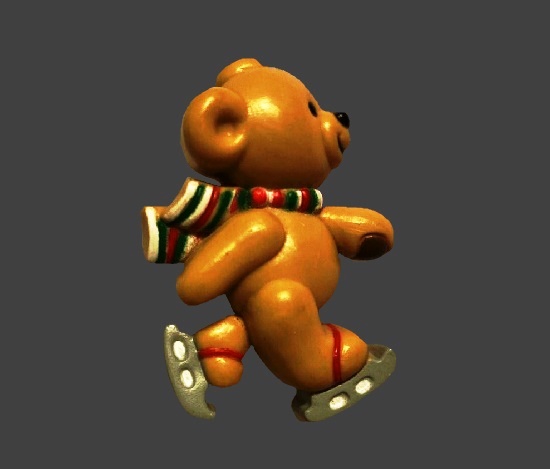 Russ Berrie vintage costume jewelry
The history of the legendary brand for the production of toys and souvenirs Russ Berrie brand began in Oakland New Jersey, in 1963. Its founder was Bronx-born Russell Berrie (1933-2002), who started his career as a toy seller in 1956. The smart boy soon realized that buyers also need inexpensive knick-knacks that can be bought in between, to cheer up or give gifts. This inspired Russell to create his workshop. Thanks to his talent and brain, his workshop in a rented garage went on to become a multi-million dollar international corporation.
The son of a jewelry seller, he was involved in this business from childhood, and the creation of costume jewelry, along with toys and souvenirs, was quite logical. The designs of these jewelry pieces are easily recognizable. Traditionally bright enamel and plastic pins, pendants and badges were excellent gifts for the main holidays – Christmas, Easter, Halloween, etc. The marking contains the word Russ, or Russ Berrie. Also, many of Russ Berrie decorations produced in Hong Kong in 1990-2000s, have the according labeling.
Noteworthy, Russell was a great philanthropist who entered the list of 40 most generous Americans in 1998. According to him, “there is nothing more important in life than helping a fellow human being.”
END_OF_DOCUMENT_TOKEN_TO_BE_REPLACED