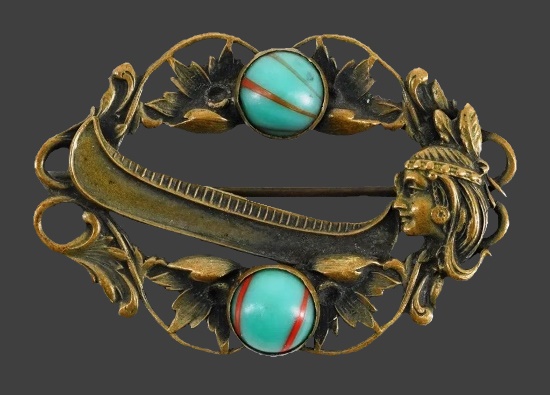 George Steere Art Nouveau Jewelry
Between 1890 and 1910, the Art Nouveau movement flourished throughout Europe and America, profoundly influencing many forms of art—posters, furniture, architecture, ceramics and jewelry. Among the most notable Art Nouveau’s jewelry designers of the time was George Nathaniel Steere.
Based in Pawtucket, Providence County, Rhode Island, George N. Steere Co. produced exquisite creations of timeless appeal. The design included stylized Egyptian, floral and animal forms with mythological dragons, lizards, bats and birds “holding up stones”. The designer signed his earlier jewelry items with stamp GS, and later GNS, which stands for George Nathaniel Steere.
Noteworthy, George Steere was the treasurer of the George N. Steere Co., while Frank T. Barton was the president of the firm.
According to the Jewelers’ Circular Weekly 1900, the firm had Steere’s Specialty Shop, located at 381 Main St., Pawtucket. The store offered high grade jewelry novelties, hatpins and similar articles. Special music, flowers, souvenirs and exquisite decorations attracted large crowds to the store. In addition, George Steere was erecting a new factory building on Commercial St., Pawtucket, the land, which Charles G. Bloomer leased to him for 10 years at $50 per year.
George N. Steere sold his company in the 1910s. Today, his jewelry is highly collectible.
END_OF_DOCUMENT_TOKEN_TO_BE_REPLACED 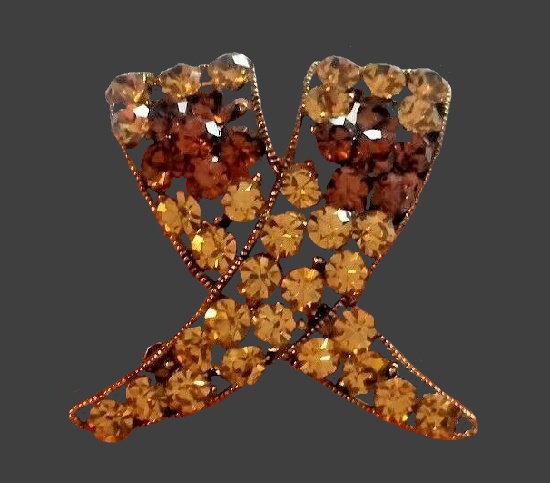 Signed ROM vintage costume jewelry (1976-1999)
The history of the jewelry brand ROM, founded by the Royal Ontario Museum, lasted a little over two decades, from 1976 to 1999. The Canadian museum, like most of the major museums in the world, produced replicas of art objects stored in the museum’s funds. In particular, paintings, sculptures, home decor items, silverware and jewelry. Registered in 1976, the trademark for the production of printed materials, decor and jewelry, “ROM” is no longer active. The brand’s logo included the word “ROM” with a crown on top.
In addition, the eponymous brand for the production of brooches, pendants, buckles, bracelets, necklaces, cufflinks and medallions was registered in the United States in 1993. This jewelry trademark ceased to exist in 1999.
Noteworthy, the markings on jewelry made in Canada and the United States are different. So, Canadian marking includes the word ROM with a crown on top and a copyright sign, and those made in the USA have the word ROM without a crown and a copyright sign. Exquisite jewelry, meticulously handcrafted from high quality materials, is a collector’s rarity today. There is no doubt that the purchase of a brooch or pendant marked ROM is a great success and happy acquisition for collectors of vintage jewelry.
END_OF_DOCUMENT_TOKEN_TO_BE_REPLACED 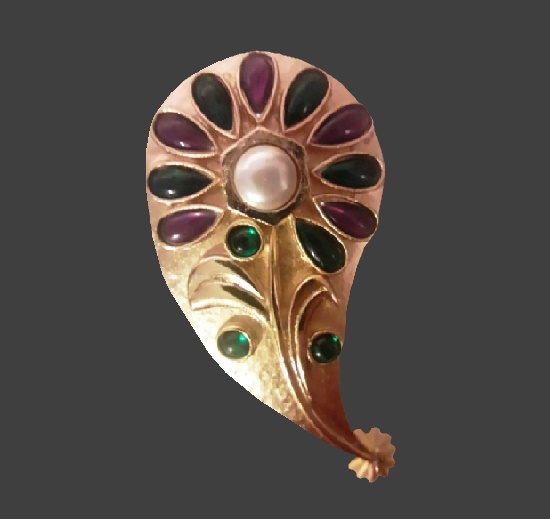 Revillon vintage costume jewelry
The world famous French brand Revillon began its history in the 18th century as a boutique selling fur products. At the height of its influence, Revillon was a full-fledged fashion house where the legendary Karl Lagerfeld began his career. In the middle of the last century, Revillon produced not only leather and fur products, but also perfumes and cosmetics. Like many perfume brands, Revillon came up with the idea of complementing their collections with jewelry. However, this did not happen until the 1960s, when thousands people worked in its Paris workshops and it was distributed in tens countries.
The manufacture of metal alloy products was diverse. In particular, medallions, belt buckles, compacts, pocket mirrors, cigarette cases, combs, chains, buttons, cufflinks, watch bracelets, jewelry boxes, tie clips and costume jewelry. Founded in Paris in the late 1970s by Revillon Luxe, the Revillon jewelry and accessories brand was registered in the US in 1987. Notably, by this time Revillon was owned by the Belgian brand Cora, which bought Revillon in 1982.
Costume jewelry marked with a stylized “R”, or “Revillon” is rare and coveted by collectors of vintage jewelry, as its production, which lasted a little over a decade, ceased in the late 1990s.
END_OF_DOCUMENT_TOKEN_TO_BE_REPLACED 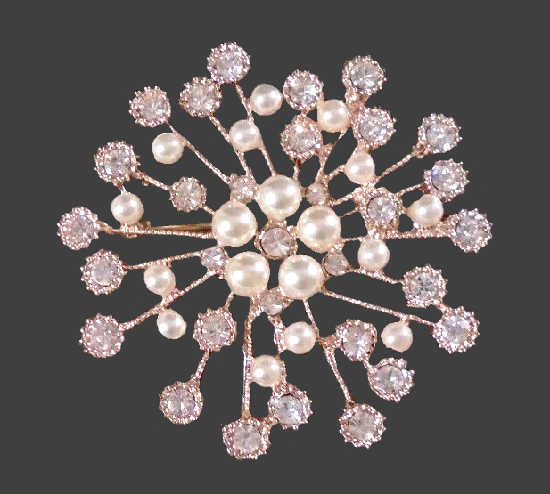 One of America’s largest department store chains, Dillard’s, Inc. headquartered in Little Rock, Arkansas, was founded in 1938 by William T. Dillard. The company grew and expanded its business especially rapidly in the 1970s, acquiring smaller companies, chains and stores. In addition, the company has launched hundreds of its own brands, including dozens of jewelry trademarks. The oldest of these was the eponymous jewelry brand, which appeared in 1976. Later, Dillard’s launched such jewelry brands as Laura Gayle (1988-2009), Gallery Design (1990-2016), Pinnacle (1990-2003), Cezanne (1991), IN-VEST-COPIES (1992-2016), Copper Key ( 1995-1999) and many others.
Among most notable Dillard’s jewelry lines are Crystal Collection and Dillard’s Boxed Collection with classic and holiday designs of brooches, earrings and pendants. The company collaborated with various jewelry designers, who made jewelry for Dillard’s. This explains the variety of designs, styles, and materials used to create jewelry. In particular, gold, silver and alloys of gold and silver tone, enamels, crystals, mother-of-pearl, glass, faux and natural pearls, etc.
END_OF_DOCUMENT_TOKEN_TO_BE_REPLACED 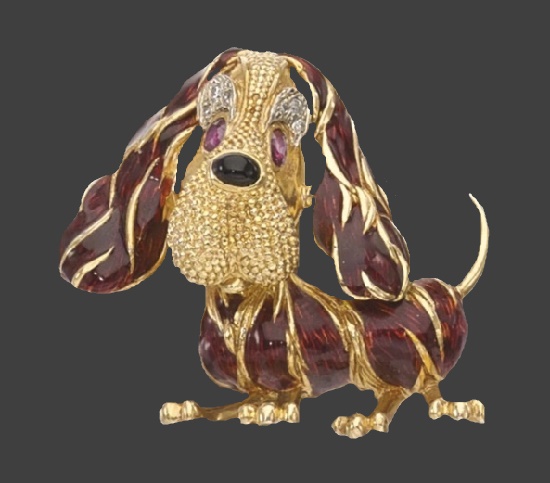 Signed FC Frascarolo bestiary jewelry (1946-1976)
The history of the Italian jewelry brand Frascarolo began after the Second World War and ended in 1976.
Italian jewelry designer Pierino Frascarolo (1928–1976), aka Rino was born into a wealthy family in Milan. In 1945 he began his career as an apprentice at Fratelli Lunati. Already in 1946, together with his two colleagues Aldo Lenti (1910-1982) and Daniele Valiera (1912-1978), 20 year-old Rino founded “Frascarolo and C” in Ferrara, northern Italy.
Since 1966, the company specialized in the design of animals in gemstones, enamel and gold. A small team of 20 designers, artists and jewelers created unique designs for brooches, rings, earrings, bracelets, necklaces, cufflinks and tie clips. The greatest success, especially in the United States, was the “Bestiario” collection, with designs of birds, small mammals and large cats. Also, the company produced money clips, key rings, watches, lighters, lipsticks and even umbrella handles.
Strong demand for the company’s jewelry led to business expansion and a doubling of the workforce. In addition, Frascarolo & Co. Inc. was opened in 1970 in New York.
However, despite great success and prosperity, for many reasons, the company ceased to exist in the 1970s. The collapse of the company was influenced by the departure of iconic employees such as the Tizzani brothers, and then Aldo Lenti, not to mention the tragic death of Pierino Frascarolo himself in 1976.
END_OF_DOCUMENT_TOKEN_TO_BE_REPLACED 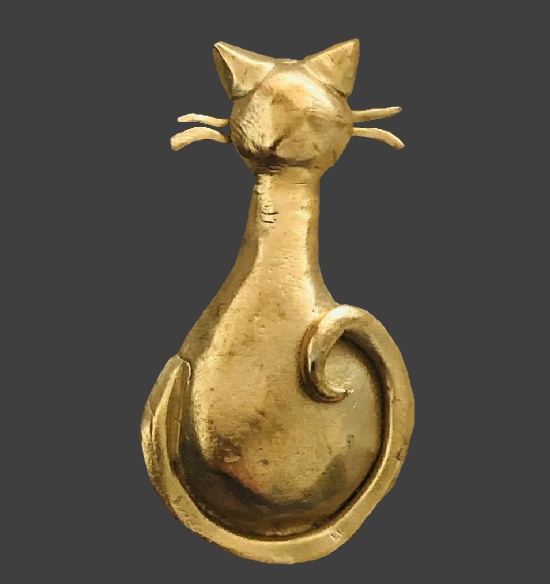 Signed Chloris vintage costume jewelry (January 1985- October 1993)
The history of the French jewelry brand Chloris lasted a little less than a decade. Founded in 1985, the jewelry company Chloris Ltd. ceased to exist in 1993. The costume jewelry atelier was located in Sausset-les-Pins on the Côte d’Azur in the south of France, near Marseille. The company’s craftsmen hand-crafted brooches, earrings, bracelets and necklaces, which today are extremely rare and highly collectible.
The traditional materials used in the creation of jewelry were gold, silver, lucite, hematite, crystals and art glass imitating natural stones. Carefully crafted from high-quality materials, Chloris jewelry was sold in jewelry boutiques throughout France.
The markings on the back of the items included the word “Chloris” in block type on a rectangular cartouche and without a copyright mark.
END_OF_DOCUMENT_TOKEN_TO_BE_REPLACED 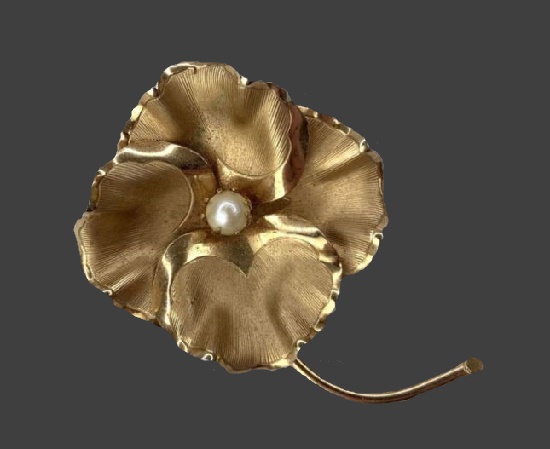 Signed R Inc vintage costume jewelry (1963-1971)
The history of Rolyn Inc began sixty years ago in Rhode Island as a family business owned by Anthony A. Rendine (1929-1993).
Incorporated in August 1963, the Rolyn manufacturing company was located at 189 Macklin street, Cranston. According to 1967 RI Supreme Court record, Rolyn used to organize jewelry shows and had a display booth showing jewelry items sold by the company at the Biltmore Hotel in Providence.
A small team of jewelers handcrafted exquisite classic floral-leaf design brooches, circle pins, earrings and necklaces. They traditionally used precious metals and natural stones. In particular, 12 and 14 carat gold, sterling silver, jade, genuine pearls, cubic zirconia, crystals and rhinestones.
The marking included the word “INC” inside a wide letter “R”, copyright symbol and ‘Sterling”, or “1/20 12k G F” for metal purity.
Made primarily in the 1960s, Rolyn costume jewelry has become a collector’s item.
Notably, since 1971, Rolyn, Inc. continued to produce quality jewelry under the new brand name Chante, which is a division of Rolyn. Chante supplies retailers worldwide under a private label agreement.
END_OF_DOCUMENT_TOKEN_TO_BE_REPLACED