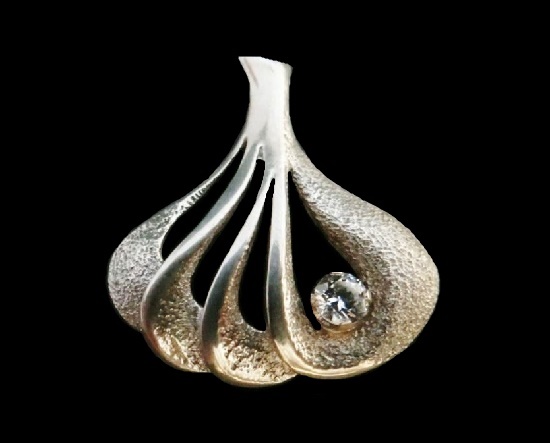 Sten Laine vintage silver jewelry (1969-1978)
Finnish Turku based goldsmiths Hans Sten and Karl Laine founded Sten & Laine company in 1969 and began manufacturing jewelry. The start of their business was very successful, and the company sold jewelry in Finland, Germany and Sweden. Karl Laine’s iconic oxidized modernist design jewelry pieces set with rock crystal became very popular.
However, the success of the company led to some disagreements between its founders. Karl Laine quit working for the company in 1976 and sold part of his shareholding in 1978 to the limited partnership Sten & Laine (later Sten Co). Between 1989 and 1990, Sten Co transferred his business, jewelry manufacturing, and part of his staff to Swiss Investment Consulting Ltd. Finally, Sten Co went bankrupt in 1991.
From 1976 until 1978, Karl Laine made jewelry designs for another Finnish silversmith company – Pertti Peuri. These pieces are marked with engraved letters “KL”. Noteworthy, Karl Laine gave the right to use his signature in new jewelry designed by other people until 1994.
Traditionally, the marking included various signs. In particular, waves logo in box, 925 for sterling silver, city mark of Turku, Fin (Finland), KL or sten & laine mark, letter and number for the year of manufacture. For example, Y7 (1976), or E8 for 1982, etc.
END_OF_DOCUMENT_TOKEN_TO_BE_REPLACED 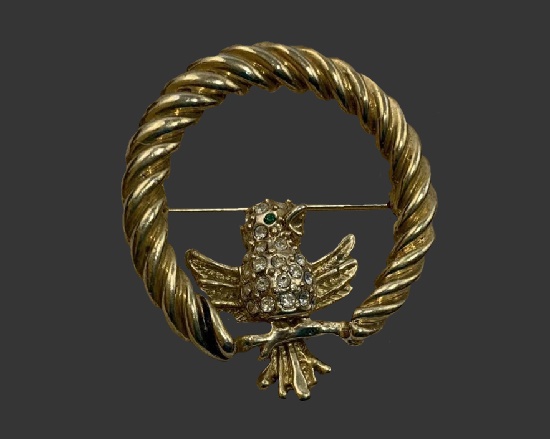 Signed Aressa vintage costume jewelry (1979-2008)
The history of the American fashion jewelry brand Aressa began over forty years ago in St. Louis, Missouri. Registered in 1979, the trademark for the production of earrings, pendants, necklaces, bracelets and charms existed until 2008. However, the production of jewelry of this brand ceased until 2000.
The brand was owned by the Roman Company (formerly T-4, Inc.), based in St. Louis, Missouri.
Aressa jewelry was mainly sold on branded cards or in labeled boxes in JCPenney department stores. Traditionally classical in design, the jewelry was reminiscent of fine jewelry made of gold and natural stones. Creating jewelry, craftsmen used high quality materials. In particular, gold-like alloy, art glass imitating precious stones, faux pearls and genuine crystals.
Noteworthy, Aressa was one of nine jewelry trademarks registered by the Roman corporation. Among them, in particular, Regency (1987), Elements (1988), Alexia (1990), Roman Craftsman (1995), Bridal Gallery (1996), In Focus (1997), Social Gala (1997), and In View (1999). All these trademarks are no longer active.
END_OF_DOCUMENT_TOKEN_TO_BE_REPLACED

Signed Tradition vintage costume jewelry
The history of costume jewelry trademark “Tradition” began more than 70 years ago in Chicago, Illinois. Registered in 1948, the Tradition trademark ceased to exist in 1992. The trademark owner was one of the oldest and largest American corporations “Sears Roebuck and Co”, known as Sears. Founded by Richard Warren Sears and Alvah Curtis Roebuck in 1892, the company began as a mail ordering catalog company. Since 1906 the new owners, Richard Sears and Julius Rosenwald expanded the business to chain of department stores.
Large corporation, Sears Roebuck and Co owned hundreds of trademarks on manufacture of various products, from pajamas and neckties to refrigerators and automobile tires. Among these trademarks were eight jewelry ones. In particular, three “Tradition” jewelry trademarks registered in 1954 (inactive in 1992), and one registered in 1996 (inactive in 2005). Other jewelry trademarks included T” (jeweled rings, 1964-2005), “Apostrophe” (1988-2010), Crossroads (1999-2009), Mainframe (2000-2009), and Covington (2001-2003).
Due to the bankruptcy on October 15, 2018, the company ceased to exist.
END_OF_DOCUMENT_TOKEN_TO_BE_REPLACED 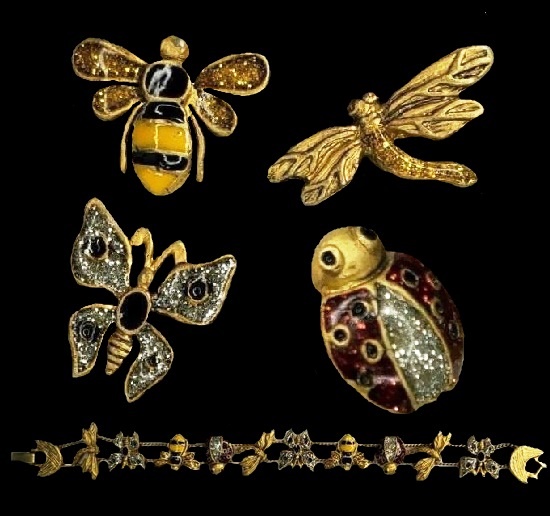 The history of the Tofa jewelry brand covers a rather short period, no more than six years. The owner and founder of the brand was B.G. Fashion Inc., headquartered at 39 West 32nd Street, New York NY 10001. Incorporated on March 16, 1994, the corporation and its trademark Tofa ceased to exist in July 2000.
Judging by the markings, which include the initials BG, Tofa and the year of production, the company produced jewelry mainly in 1995.
Traditionally, the company’s craftsmen created slider bracelets with a variety of themed charms sliding back and forth along a double metal cord. The materials used by the craftsmen – metal alloys, pewter, silver and 18 carat gold.
Noteworthy, the most characteristic design element of the bracelets was the clasp in the form of two crescents. The design of 6-7 figure charms for each bracelet included themes for all tastes, making them a wonderful gift for anyone. For example, for sports fans – baseball, tennis, golf, rugby, cheerleaders, etc. Or the topic of school, university, particular professions and hobbies. Also, a series of charms for the most significant holidays and events – Christmas, Halloween, Easter, and more. The religious theme with Noah’s Ark, with detailed study of animal figurines, became an interesting design of the charms. Known for their slider bracelets, Tofa craftsmen also made brooches and pins, but in a more limited edition.
END_OF_DOCUMENT_TOKEN_TO_BE_REPLACED 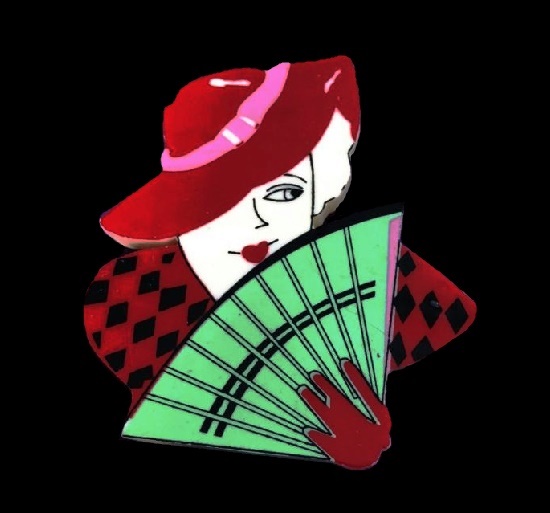 Founded in 1998 by Fullerton California based artist Sue Ellen Cooper “The Red Hat Society” (RHS) gave birth to a new holiday. On April 25th, Red Hat Day is celebrated all over the world. Actually, it is a “labor union” originally for free-spirited women over 50, and now of all ages. Indeed, age doesn’t matter, girls of any age prefer jewelry and hats of red and pink colors. Ladies gather for tea parties, travel, have picnics, take walks, fool around and enjoy it. Because a free woman can afford everything. In addition, under the auspices of the Society, ladies sell hats, embroideries, and handcrafted accessories and jewelry. The main design of RHS jewelry includes the symbol and official emblem of the Society – lovely Ruby Red Hat.
Noteworthy, the Society with worldwide membership has become the great inspiration for artists and jewelry designers. Among the jewelry companies who created Red Hat inspired brooches, earrings, pendants, bracelets and charms are dozens of well-known brands. In particular, Trifari, Avon, Monet, Tanya Creations, AJMC, JJI, and more.
END_OF_DOCUMENT_TOKEN_TO_BE_REPLACED 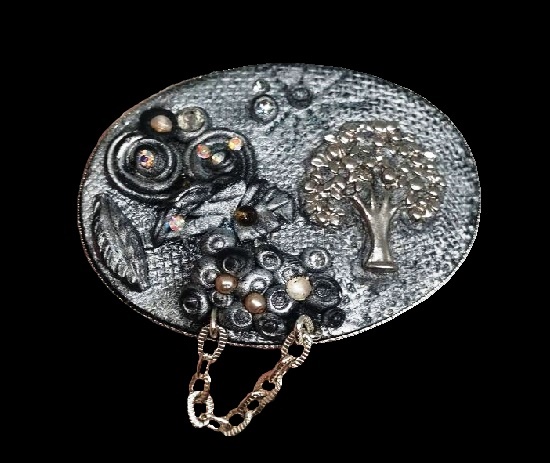 The history of FIMO brooches began in 1939, when the well-known German doll artist Käthe Kruse (1883-1968) was trying to find a suitable material for making puppet heads. One of the manufacturers of chemical products suggested to her a material that was not yet known at that time. And the manufacturers themselves had little idea of ​​its qualities and applications. A gray mass called igelite was obtained from the waste from oil extraction. At that time, no one had any idea what possibilities it had.
The first experiments on the creation of doll heads were unsuccessful, and work was suspended. However, in 1941, Katie’s daughter, Sophie, continued to experiment with mass. So, she added solvent and paints to it until she got a plasticine mass. It was from this material that she began to create vases, mosaics, paintings, miniatures, shoe soles, figurines and toys.
In 1954, Sophie Rehbinder-Kruse founded the FIMOIK brand for manufacture of accessories, buttons, figurines, Soft Modeling Blocks and jewelry. In 1964, Eberhard Faber bought out all rights and licenses for polymer clay and started production under the name “FIMO”.

Fashion for jewelry, and especially for brooches, reached its peak of popularity in the late 1980s, and this brought success and profit to the company. Polymer clay was a perfect material for handcrafting costume jewelry. Other materials included glass beads, rhinestones, chains, faux pearls, and metal alloys.
END_OF_DOCUMENT_TOKEN_TO_BE_REPLACED 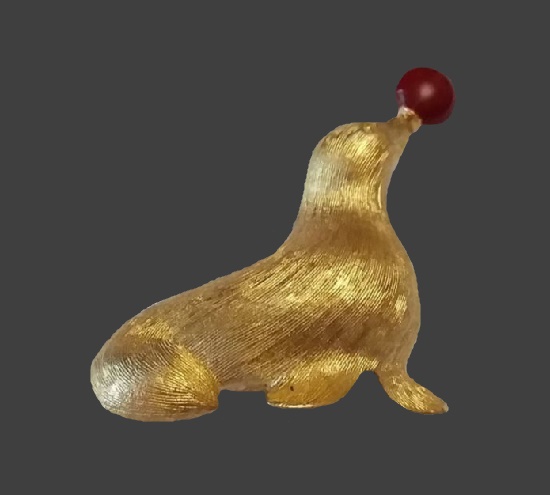 The history of the American jewelry brand Enjoux lasted a little more than two decades. Enjoux Inc., located at 355 Park Rd, Southern Pines, North Carolina, was a family business run by Edward Paul. Incorporated in 1980, Enjoux Inc. ceased to exist in 2003.
In fact, there were two more eponymous trademarks owned by Monet (New York) and Crystal Brands, Inc. Noteworthy, Crystal Brands, Inc. produced jewelry for such iconic brands as Monet, Trifari, Sears Roebuck & Co. and JC Penney Co.
Monet, Enjoux Inc., and Crystal Brands, Inc. produced Enjoux jewelry in the 1980s and 90s. Moreover, the jewelry has a similar design and materials – gilded metals, enamels and rhinestones. However, thanks to the markings on the back of these pieces, they can be unmistakably identified. So, Enjoux Inc. jewelry marking included round word “Enjoux”, while Monet’s products had a completely different style. Specifically, the Monet trademark includes black letters “Enjou” with the final “X” highlighted in white. And markings on jewelry include the word “Enjoux” in capital letters on a straight line.
END_OF_DOCUMENT_TOKEN_TO_BE_REPLACED