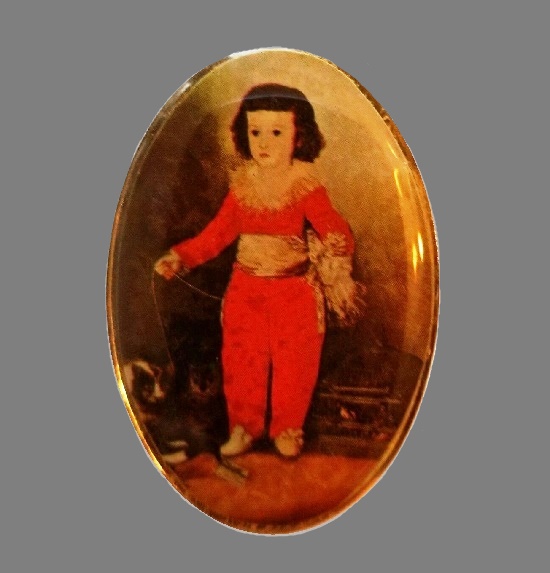 Cameo brooch with a miniature painting of a boy with a dog. 14 K Gold plated. Signed DaVinci vintage costume jewelry

Located in Providence, Rhode Island, Davinci Creations Inc. produced high quality costume jewelry for three decades (1950-80s). Although there’s not much info about the founders and company history, yet there are some documented records by the United States Patent Office. According to Official Gazette of the United States Patent Office, Volume 820, Capri Jewelry Inc., New York City, New York became assignee of Davinci Creations Inc., Providence, RI, May 12, 1965. But the company continued manufacture of costume jewelry signed Davinci.
Meanwhile, the company’s workshops, located on three floors of a four-story building at 244 Oak Street in Providence, were hit by a fire on January 17, 1973. However, the company continued to operate. Index of Trademarks Issued from the United States Patent Office listed the company Davinci Creations Inc., Providence, RI. as active in 1974.
Traditionally, the jewelers used gold and silver tone alloys, 14 K gold plating, Austrian crystals and rhinestones. One of the most famous series of jewelry was signs of the zodiac. All products were marked with Da Vinci and the copyright mark.
In fact, there are some other jewelry companies with such an iconic brand name – Davinci. One of them – family business Da Vinci Fine Jewelry, Inc in the USA. Also, there is a completely modern brand with the same name in China and in Italy. But these are all completely different brands!
END_OF_DOCUMENT_TOKEN_TO_BE_REPLACED 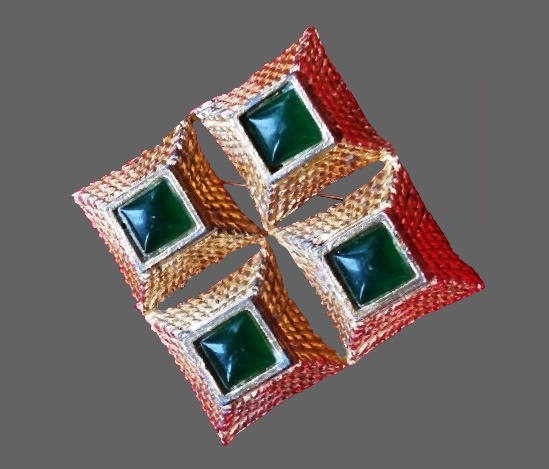 Van S Authentic vintage costume jewelry
Founded by Joanne and Reginald Lyon Francis Moonan in the 1930s, Authentics Inc. jewelry company was active for about four decades (1930-1969). Later, in the mid-30’s, they renamed their company to Van S. Authentics. According to New York Times, Joanne and Reginald sold their decorations at the Hattie Carnegie salon in New York, and at various stores around the US. Also, Van’s costume jewelry frequently appeared in fashion magazines of the time, and the Metropolitan Museum of Art acquired some of their designs. Noteworthy, produced in limited edition, in addition to Van’s or Van’s authentic marking, each decoration has a personal number.
During World War II, due to the luck of metals for jewelry, the designers used not ordinary materials, like straw, toy parts, and even nuts. Richard Martin, curator of the Costume Institute of for the costume collection at the Fashion Institute of Technology, when he was the curator there. In 1960s the Moonans sold their company.
New York based costume jewelry designer Joanne A. Moonan created a new company called Wendy Jewelry after her daughter Wendy Lyon Moonan. Of course, it was a completely different company.
END_OF_DOCUMENT_TOKEN_TO_BE_REPLACED 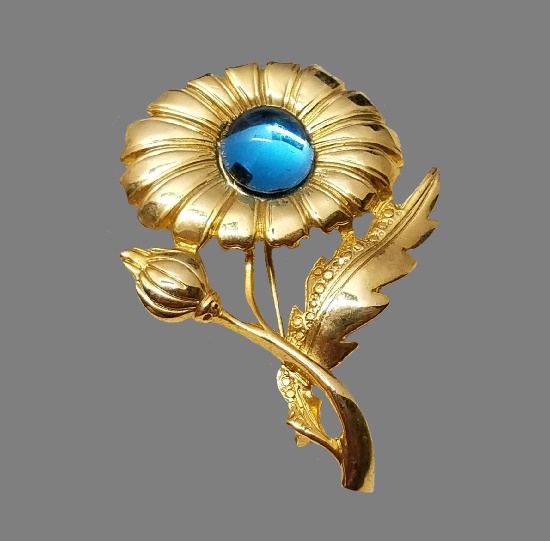 Signed Two Sisters vintage costume jewelry
American jewelry designers Lauren And Leah Medici were active for about three decades (late 1960s – 1992). The designers drew inspiration from classic craftsman and the culture of ancient civilizations, interpreting them in their unique designs. They produced limited edition series of costume decorations, for example ‘Glitter critters’, “Parisian Palettes”, ‘Whimsies’, etc.
Traditionally, the designers of this company used a metal alloy of glossy or matte gold tones, rarely – silver tone. Also, faux pearls, artificial sapphires and rubies, rhinestones and art glass, mother-of-pearl and enamel. Handcrafted with great attention to detail, this vintage jewelry has become collectible.
All decorations featured in this publication – signed vintage made in 1970-1992. Original vintage decorations have marking of copyright sign and “two sisters” on the back side. Noteworthy, later decorations provided with paper tags, with the brief information about the design, are made in Taiwan.
END_OF_DOCUMENT_TOKEN_TO_BE_REPLACED 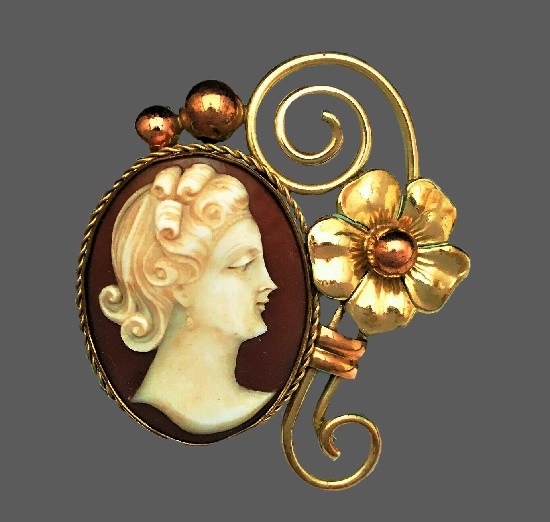 Founded in 1914 in New York by Marcus Stern and Jacques Kreisler, The Stern-Kreisler Jewelry Company specialized in the production of high-end jewelry and bijouterie. Very soon they began to do business with the best department stores across the country. Originally, the company specialized in the production of men’s accessories – cufflinks, tie clips, bracelets and chains for watches, etc. Some years later, Jacques Kreisler became a sole owner of the company, which he renamed to Jacques Kreisler Manufacturing Co.
According to retro ads posters, the company moved to North Bergen, New Jersey. One of the designers who worked for the company was William Diehl. In 1948, Kreisler expanded his product lines and added watches and leather watch bands to men’s and women’s jewelry.
Also, seven years later they stopped the production of high jewelry lines launched in 1945 and mainly produced costume jewelry. Noteworthy, the manufactory ceased operations in 1979. In fact, Kreisler jewelry is rare and quite expensive.
Traditionally, markings included the brand’s name “Kreisler Quality USA”, or “Kreisler US” with a star, and sometimes added the purity of metal, for example 1\20 – 12kt G.F.
END_OF_DOCUMENT_TOKEN_TO_BE_REPLACED 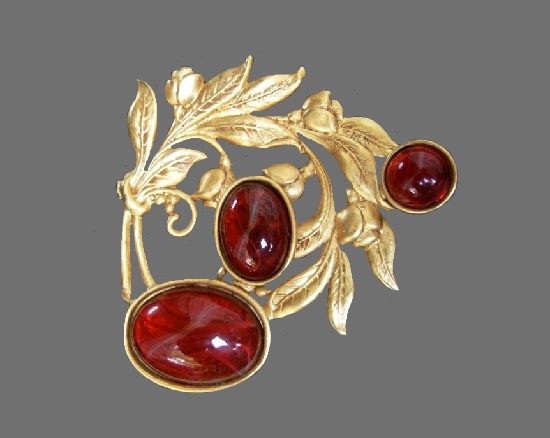 Kate Hines vintage costume jewelry
“A woman wears jewelry that is of her choosing, that is an expression of herself. Once chosen, it is no longer the designer’s, but her own”. Kate Hines
American jewelry designer Kate Hines first registered her own store in Tiverton, Rhode Island, in 1981, categorized under Jewelry Stores. Also, she incorporated Kate Hines Inc. company 5 June 1997 in Providence, Rhode Island.
According to sources, she graduated from Rhode Island School of Design. Immediately after leaving school, she founded her own studio in Tiverton, RI with a great desire to create jewelry. To achieve her goal, she hired four young talented craftsmen who successfully created beautiful high-quality jewelry, embodying the designer’s intentions. She combined modern and classic and created wearable art. As a result, the jewelry collections of this brand have found their buyers and fans.
Besides, in 2006 Hines registered Pearl Poodle jewelry brand. Exhibited in prestigious galleries in London, Australia, Boston and New York, her jewelry put Kate at the forefront of the revival of American costume jewelry.
The company with an annual revenue of less than $500,000 ceased to exist in early 2010s. Kate Hines jewelry page on the social network and her website became inactive in 2012.
END_OF_DOCUMENT_TOKEN_TO_BE_REPLACED 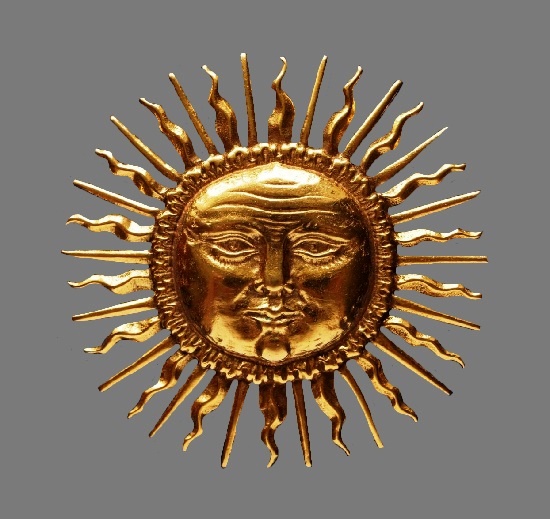 Metropolitan museum of art MMA vintage costume jewelry
For several decades, many large museums have been producing varied collections of jewelry, based on ancient jewelry, paintings, and objects of decorative and applied art stored in museum collections. Some of the most famous are the jewelry collections of the Boston Museum of Fine Arts (MFA), the Metropolitan Museum of Art (MMA) and the National Gallery of Art (NGA). Earrings, necklaces, brooches with the markings of these museums (MFA, MMA, NGA) have long been collectibles. Some of them have become real collectible rarities and are in great demand among collectors and fans of costume jewelry.
Traditionally made as copies of museum originals, they demonstrate high quality workmanship and the use of high-quality materials. In particular, silver, high-quality jewelry alloys, expensive crystals, pearls, gold (14, 22, 24 K) and colored enamels.
END_OF_DOCUMENT_TOKEN_TO_BE_REPLACED 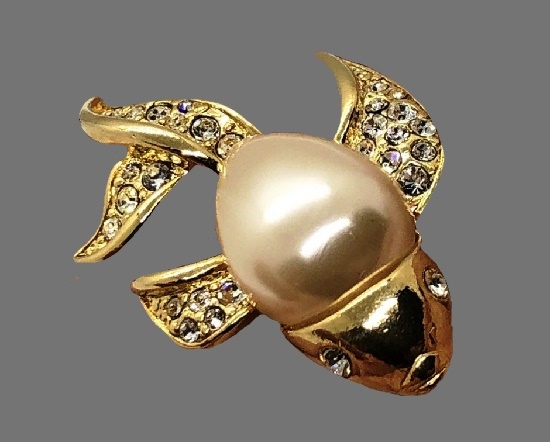 Jesara vintage costume jewelry
A family business of Aram and Jessica Kalfian, JESARA JEWELRY, INC. was registered in the Register of the state of Connecticut under the legal form of Stock. Established on 2nd May 1989, the company had worked for a short period, expired in 1999.
Despite such a short period of work, the products of this New York based company were comparable in quality and design with such fashion icons as Givenchy, Dior and Kenneth Jane Lane. Traditionally, the masters of this company used alloys of gold and silver tones that mimic precious metals. Also, lucite and art glass, rhinestones and cabochons. High-quality vintage costume jewelry of this company has become collectible and highly sought after for lovers of vintage jewelry.
END_OF_DOCUMENT_TOKEN_TO_BE_REPLACED