Swarovski 2016 kaleidoscope
The world leader in the production of the most beautiful crystals introduced innovations for the spring / summer 2016. The new collection includes new colors and effects of beads and stones. Stunningly gorgeous look, thanks to the depth and the play of light, like a diamond. This is only a small part of novelties of Swarovski spring / summer 2016.
What are Swarovski crystals made of? From crystal. Today the company is a leading manufacturer of high quality crystal worldwide. The collections of the brand include more than one hundred thousand types of stones of various shapes. Swarovski patented a special cut of rhinestones with a large number of side faces (seven narrow and wide).
END_OF_DOCUMENT_TOKEN_TO_BE_REPLACED Baroda pearl carpet
On March 19, 2009, occurred an event, the news of which appeared on many news sites around the world. At the auction house Sotheby’s in Doha, Qatar, was sold a carpet, a unique example of pearl embroidery. Embroidered with beads, pearls and adorned with precious stones – emeralds, rubies, diamonds, and set in gold, the carpet size was 1,73m to 2,64m. According to experts, for every square decimeter of carpet the craftsman used nearly 5,000 pearls and beads. Overall, it took 2.2 million pearls and beads.
History of Baroda pearl carpet is just as amazing as it is. Created in the early 1860s, Pearl carpet was made on the orders of one of the richest Indian Maharaja – the ruler of Baroda Khanda Rao.
END_OF_DOCUMENT_TOKEN_TO_BE_REPLACED 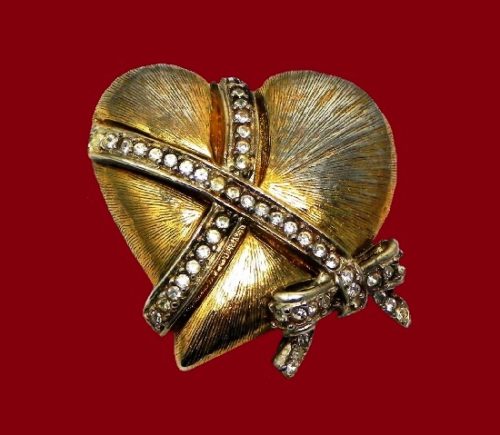 Ralph DeRosa costume jewelry
The history of exceptional in quality and design Derosa jewelry began in sunny Naples, Italy in 1884. Inherited the family business, Ralph de Rosa successfully conducted his business until 1905. As a man who wanted to significantly expand his own horizons, in the beginning of the last century he left for America – “the land of opportunities”.
Despite all the difficulties awaiting immigrant, Ralph DeRosa founded the eponymous company in 1934 in New York City. The next year, he launched his first collection “Meeting in Venice”. Nhe dedicated the collection to one of the most subtle, complex, romantic Crafts – Venetian lace.
Over the next 7 years, until the death of the romantic jeweler, Ralph DeRosa repeatedly returned to the subject of the Venetian lace.
When DeRosa died in 1942, his wife and daughters continued the family business.
END_OF_DOCUMENT_TOKEN_TO_BE_REPLACED Yakutia Diamond Treasury
The Sakha Republic (Yakutia) is a federal subject of Russia. Yakutia is 95% of Russian diamond production and 15% of gold production. Enormous, almost unimaginable wealth. Permanent exhibition “Treasury of the Republic of Sakha” – a successful attempt to provide at least a small part of this wealth. 2015 Diamond week has presented the exclusive exhibition of “EPL Diamond”. EPL Diamond is a Russian company specializing in the production of diamonds, diamond jewelry and sales. The company is headquartered in the capital of the Sakha Republic – Yakutsk. EPL company is the largest producer of diamonds in Yakutia and the third largest exporter of diamonds in the Russian Federation.
END_OF_DOCUMENT_TOKEN_TO_BE_REPLACED Made in order to preserve the anonymity of a lover or a loved one, just as memorable item, Eye miniature jewellery

Eye miniature jewellery
Such commemorative miniatures were in vogue and became very popular in the 1790 – 1820’s in England, then in France, and Russia. The eyes of lovers were portrayed in jewelry: brooches, rings, bracelets and pendants, on the boxes, and wallets. Most often, these miniatures were made on on ivory. Often with a miniature was kept a lock of hair of beloved one.
The history of the emergence of these miniatures is as follows:
Prince of Wales (later King George IV) was in love with the widow Maria Fitzherbert (she was a Catholic and six years older than him) and made her a proposal. According to belief, sometime around 1785, Mrs. Fitzherbert commissioned Richard A. Cosway, a London miniaturist, to paint one of her eyes. The portrait painted on ivory, was placed behind glass and set within a locket. December 15, 1785 was their secret wedding.
END_OF_DOCUMENT_TOKEN_TO_BE_REPLACED Turquoise – stone connecting hearts forever
No woman can remain indifferent if her loved one gives her a ring with turquoise. And not only because it is a symbol of love, and one of the most beautiful among the gems. Its name comes from the Persian word “Firuz” or “Pirouz”, meaning “stone of happiness” and “victory.” The second name of the stone – Turkus is less poetic, and only signifies that in ancient times it was brought to Europe from Turkey.
Meanwhile, the Persians believed that the bones of those who died of unrequited lovestone formed the stone.
Noteworthy, if a loved one gave you the stone, and after a while the stone became pale, it means that the feelings began to fade.
According to belief, Turquoise has magical properties and as a lucky stone, is able to make peace between enemies, and pacify anger. Noteworthy, the stone has the ability to change color to pale, when the weather is bad, or if an ill person owns it. The gem enhances intuition, courage, insight, peace in the family, and brings happiness. Blue turquoise has a strong energy. Dark blue stone symbolizes the struggle against evil.
Designed for determined people and leaders, it helps its owner to concentrate. Also, to understand the purpose of life, and gives the opportunity to gain power and gain credibility. Do not forget that turquoise has its own character, so if an evil man owns it, he would not escape punishment from the stone.
END_OF_DOCUMENT_TOKEN_TO_BE_REPLACED