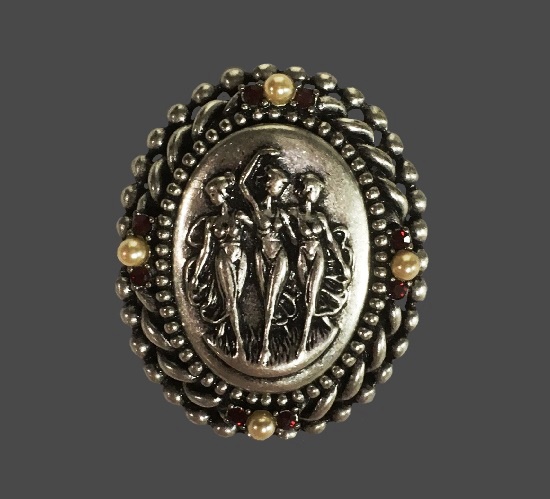 Jac Win Design vintage costume jewelry
The history of the Jac Win jewelry brand began in October 1984, when Jacqualyn and Robert Miller registered their family business Jac Win Design Inc. in Mount Dora, Florida. Robert was mainly involved in organizational work, being the president and treasurer of the company, while Jackie was involved in creative work. A talented designer, she excelled in many crafts, including felting, textiles, polymer clay, ceramics, quilting, fusing, painting, beading, and costume jewelry.
Best known in the vintage jewelry market are her Christmas angel and cameo brooches and pendants with filigree details handcrafted from silver or gold alloys. Created in the 1980s, her guardian angel pins feature faux pearls and aurora borealis rhinestones. Traditionally, the designer marked her pieces with “Jac Win Design” on round or oval base, without a copyright sign.
Noteworthy, the company is still active, and Jac Win Design working studio, gift shop and art gallery is in Huntsville, Alabama.
END_OF_DOCUMENT_TOKEN_TO_BE_REPLACED 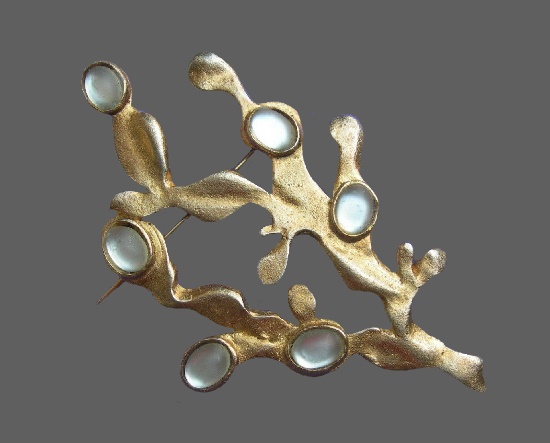 Il Etait Une Fois vintage costume jewelry
French jewelry designer Didier Thebaud began making costume jewelry in 1978, and founded his family company Ca Commence Comme Ca in 1994. Originally, the designed signed his jewelry pieces with his full name Didier Thebaud. However, since 1990s, when his son joined the family business, he changed marking to “Il Etait Une Fois”, which means “Once upon a time”.
Traditionally, the designer used various materials – pewter alloy, silver, brass, bronze, copper, and gold. Made by hand, his collections changed every 6 months showing varied styles and designs – from ethnic to modern, minimalist to geometric. The company sold its products in costume jewelry stores in France and throughout Europe.
The company residing at 1 rue de la Porte de Chartres, 28 320 Gallardon ceased to exist in 2019.
END_OF_DOCUMENT_TOKEN_TO_BE_REPLACED

Ines De La Fressange vintage costume jewelry
According to these designs, oak and only oak is worthy of admiration and artistic expression in brooches, earrings and bracelets. At the same time, these pieces amaze with variety of designs and the talent of their creator.
Meanwhile, the symbolic meaning of the oak in the mythology of the peoples of the world is extremely wide. In particular, longevity, splendor and power, fertility, vitality, fortitude, the origin of the great from the small, the sacred axis of the world, and heavenly gates.
Born on August 11, 1957 in France, Ines De La Fressange grew up in a wealthy aristocratic family, and began her modeling career at the age of 17. Already at the age of 18, she was on the cover of Elle, having become a style icon for many years. Karl Lagerfeld himself noted her beauty and resemblance to Coco Chanel. Indeed, she was the face of Chanel haute couture house for six years.
After the end of her modeling career, she created her own brand “Inès de la Fressange SA” and registered seven trademarks. In addition, she opened a boutique selling luxury goods, ready-to-wear, perfumes and designed by her costume jewelry.
Produced for no more than a decade, from 1991 to 2001, these gold tone decorations have become collectibles. Noteworthy, alongside with the initials “IF” the back side of each decoration, the marking often include number.
END_OF_DOCUMENT_TOKEN_TO_BE_REPLACED

The history of Wells, Inc., a jewelry company based in Attleboro, Massachusetts, began in 1922, founded by Raymond L. Wells (1904-1977). Initially, the company’s craftsmen made products from sterling silver, as well as gold, natural stones, and enamel. Traditionally, markings, usually on an oval cartouche, include “Wells Ster”, as well as 12K if the item contains gold.
Meanwhile, their “Seventy Two” series of silver bracelet charms has become best known. Made in the 1950s and 60s, such series as ‘Back to School’, retro cars, telephones, lighthouses, pianos, books and various objects are now highly collectible.
Noteworthy, Wells founded Raimond Silver Mfg Co in 1961 and registered several brands to manufacture and import silver goods, from kitchen utensils to jewelry. Six years later, he also acquired the oldest Massachusetts silverware company R. Blackinton & Company (founded by Walter Ballou and Roswell Blackinton in 1862). Wells’s business expanded, designs and products became more diversified, however, jewelry production ceased after Raymond’s death in 1977.
END_OF_DOCUMENT_TOKEN_TO_BE_REPLACED 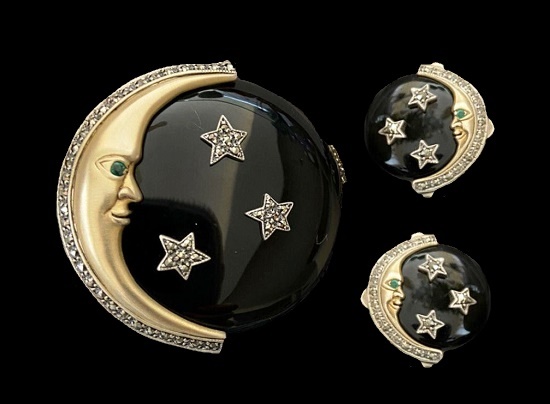 Signed Vintage Creations costume jewelry
The history of American jewelry company Vintage Creations Ltd. began in 1973 as a family business of Murray Shapiro and his wife Mildred. Originally, the company’s name was Heirloom 73 (2073) Jewelry Ltd., located at 242 West 30Th St. New York, New York. Seven years later Murray and Mildred Shapiro’s son Drew joined the family business. Since July 12, 1982 the company began manufacturing finely detailed handcrafted Art Deco old style costume jewelry with “Vintage Creations” marking.
Traditionally, the craftsmen used 925 sterling silver, marcasite, onyx, crystals and various gem stones. The marking, alongside with “sterling” and “Vintage”, has a small stamp consisting of a stylized “H” and the number “73” inside it.
Noteworthy, the company ceased to exist in 1991. According to sources, one of the designers of Vintage creations was Jenna Nicole, who later registered her own jewelry company.
END_OF_DOCUMENT_TOKEN_TO_BE_REPLACED 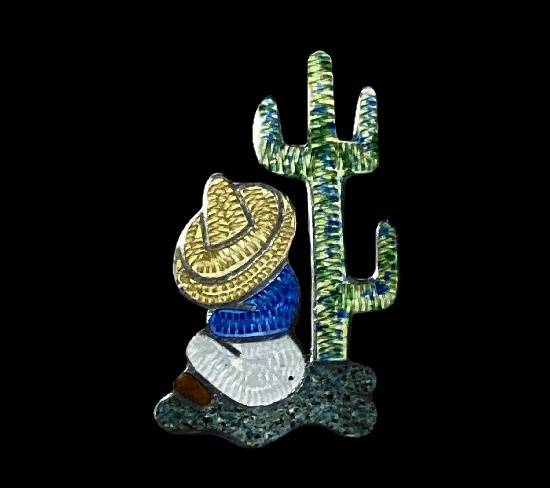 Jeronimo Fuentes vintage silver jewelry
The renowned Taxco silversmith Jerónimo Fuentes created unique artistic silver jewellery with the use of guilloche enamel in the 1950s-70s. Fuentes was a pupil of American-born silver designer and artist William Spratling (1900-1967), having received his knowledge at the famous studio Taller de las Delicias. After completing his studies, he began his career at the Margot de Taxco studio, where he became its lead master (in 1952). Thanks to Margot van Voorhies Carr (1896-1985), the founder of the workshop, he mastered the “language of enamel on silver”, bringing to life any of Margot’s jewelry fantasies. However, in 1961, Fuentes opened his own workshop, where he began to make funny silver jewelry with multicolored enamel. After the closure of her studio in 1974, Margot allowed Fuentes to use her designs, but the artist chose to go his own way.
Traditionally, the markings on his products include HECHO EN MEXICO, STERLING, Silhouette-eagle and stylized JF, for Jeronimo Fuentes.
END_OF_DOCUMENT_TOKEN_TO_BE_REPLACED 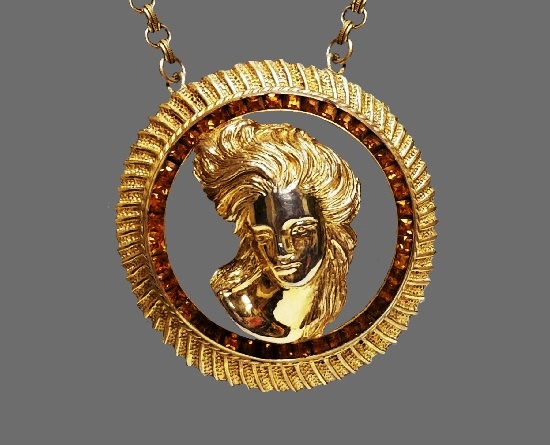