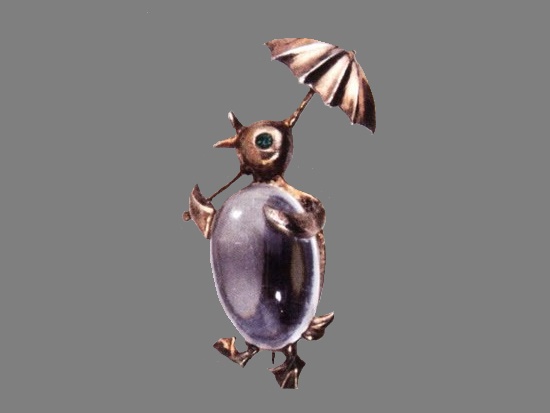 Norma Jewelry Corp vintage costume jewelry
Founded by Alfred Benjamin Shawl, American company Norma Jewelry Corp. began producing costume decorations in 1944. However, the company existed for just over 10 years, from 1944 to 1954. During this period Alfred Benjamin Shawl had several patents for some interesting jewelry designs. In particular, Water Girl (1947), Accordionist (1948) and Cow Girl (1949). According to “American Costume Jewelry” book by Brunalti, he registered the last patent in September 1954. Since there is no information about the company after this, Norma Jewelry most likely ceased to exist in the late 1950s.
Traditionally, jewelers used sterling silver in their brooches design, often gold plated. Also, the use of rhinestones, cabochons, and especially the lucite insert – characteristic of the design. Besides, the design of the 1950s includes the use of colored enamels and semi-precious stones. In fact, the jelly belly jewelry series was very popular in the 1940s and is highly collectible in our time. Noteworthy, each product of this company has marking – Norma Sterling Pat.Pend.
END_OF_DOCUMENT_TOKEN_TO_BE_REPLACED 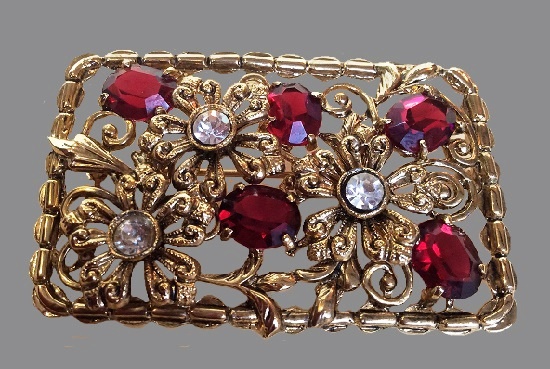 Unfortunately, there is very little information about the creator of vintage jewelry labeled Weinberg NY. According to scant information, this brand was active from early 1980’s to late 1980s. The very name of the American company Weinberg NY indicates its location. Accordingly, each Weinberg decoration is a vintage rarity. As a rule, products marked Weinberg have an elegant and sophisticated design in the art deco style or made in classic floral and fantasy motifs. Also, figurative brooches – ballerina, dragon, etc. Traditionally, jewelers used metal of silver or gold tone. Besides, each brooch, earrings or bracelet is an abundance of rhinestones, crystals, art glass, lucite and acrylic plastic.
Noteworthy, each decoration has label – Weinberg NY, or Weinberg New York.
END_OF_DOCUMENT_TOKEN_TO_BE_REPLACED 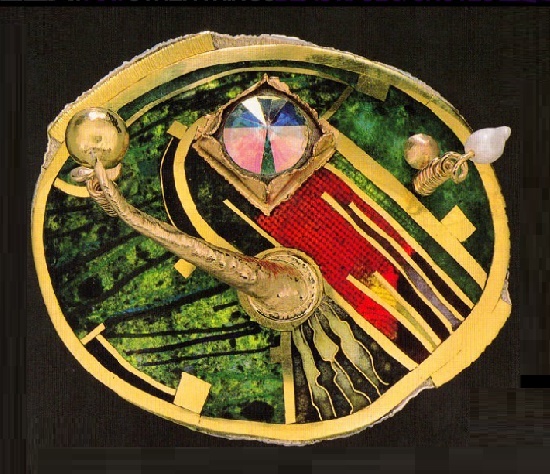 His products are in the collections of the American Museum of Crafts, the Museum of Fine Arts in Boston, the Cleveland Museum of Art, and the Metropolitan Museum of Art. Also, represented in the Vatican Museum and the Victoria and Albert Museum in London.
END_OF_DOCUMENT_TOKEN_TO_BE_REPLACED 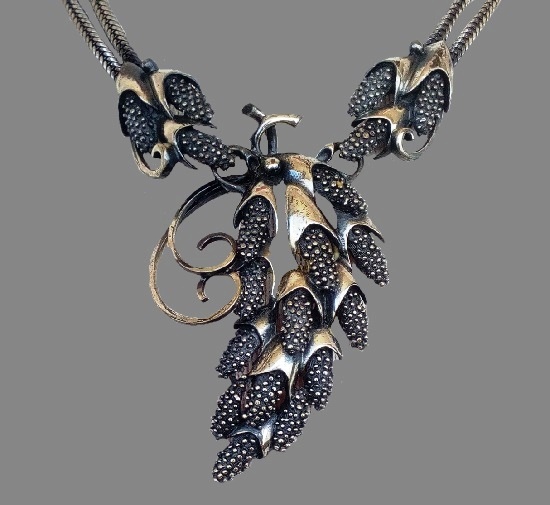 Signed Botticelli vintage costume jewelry
Traditionally, vintage pieces signed Botticelli contain very positive symbolism. According to belief, hop is a symbol of vitality, fertility, goodness and well-being. Besides, the image of hops relates to the idea of a happy marriage.
In fact, Providence based jewelry company “Botticelli” was active in the period of 1969-78. Meanwhile, the style and some technological features of “Botticelli” decorations are identical to jewelry “Tortolani”. So, the brand “Botticelli” could be one of the independent lines belonging to “Tortolani”. Well, it’s just my opinion.
Undoubtedly, all vintage jewelry pieces by this brand show simple but elegant, even timeless design. Made of silver coated blackened silver, sometimes with the use of enamel, the jewels demonstrate high casting quality and a wonderful sense of shape.
END_OF_DOCUMENT_TOKEN_TO_BE_REPLACED 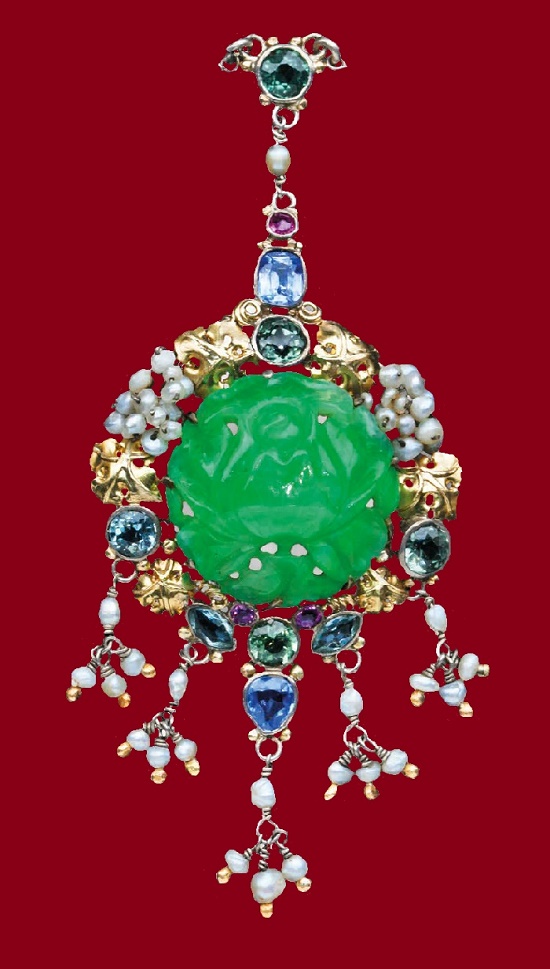 English jewelry designer Dorrie Nossiter
Born 29 June 1893 in Aston, Dorrie Nossiter was a famous English jewelry designer. Traditionally, she made her jewelry decorations in the well known style of the time – Art Deco and Arts and Crafts. Creating her well designed jewelry pieces, Nossiter used gold and sterling silver. Also, various gems, such as sapphire, tourmaline, jade and pearls. Noteworthy, Dorrie Nossiter did not mark any of her jewelry pieces. According to designs, there are visual similarities in Nossiter’s jewelry and works of another English designer Sibyl Dunlop. Moreover, some of the products attributed to Dunlop (so called “carpet of gems”) are actually works made by Nossiter. However, the design, settings and general method of construction of these decorations allow jewelry lovers and collectors to attribute them to Dorrie Nossiter.
Interestingly, Nossiter assigned a name to each piece of jewelry, for example “Silent Evening”, “Heavenly Twins”, etc.
Talented jeweler Dorrie Nossiter, who worked primarily in the 1930s, died in 1977.
END_OF_DOCUMENT_TOKEN_TO_BE_REPLACED 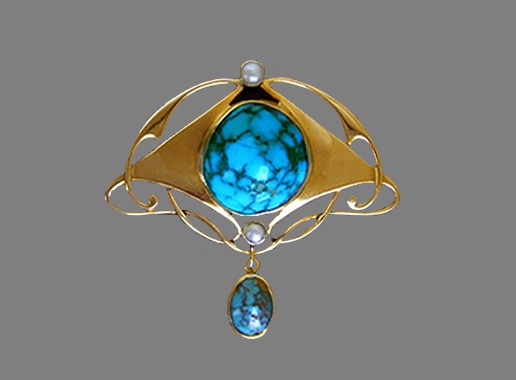 Created in London in 1884, the jewelry company Murrle, Bennet & CO, specialized in art nouveau jewelry. The company collaborated with Liberty, and very often their decorations were stylistically close. The art of modern jewelers did not escape the influence of the art of other eras. In particular, the Celtic ornaments. However, it did not consist in borrowing elements of style and reproducing historical patterns, but in synthesizing different cultures.
Traditionally, Murrle Bennett quality pieces have marks M B & Co, also stamped carat – 9 ct, or 15 ct, etc.
END_OF_DOCUMENT_TOKEN_TO_BE_REPLACED 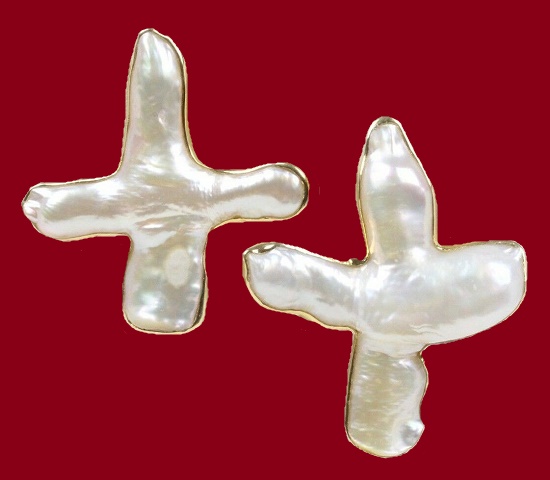 The story of self-taught jewelry designer Walling began in his childhood when he was… eight years old! The son of the United Nations’ activist, he spent his childhood in the capitals of Lebanon, France, Switzerland, and West Africa. According to Walling, Africa influenced his love affair for color. In particular, the fabrics of African women’s clothes, the way they wore turbans, and their elegance. He was there for two years and undoubtedly, had great and useful experience there. Meanwhile, in 1968 he moved to New York. Already in 1972 he began making his own jewelry line, which we now know under the name of Christopher Walling. Noteworthy, the designer became known mostly for his unusually shaped and rare baroque pearl and diamond jewelry. His work has significantly influenced modern jewelry, featured in various TV programs. In particular, two PBS documentaries, the Nova program, “Mystique of the Pearl” and the Nature special “Diamonds.”
Described by Sotheby’s as “undoubtedly one of the most exciting jewelry designers”, his creations have adorned many celerbrities. Among them Maya Angelou, Linda Gray, Brook Hayward, Jasper Johns, Alex Katz, Queen Noor of Jordan, Danielle Steele, Renee Taylor, Elizabeth Taylor and others.
END_OF_DOCUMENT_TOKEN_TO_BE_REPLACED