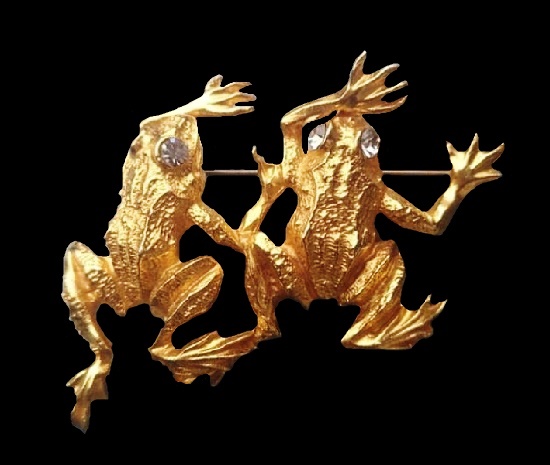 Judith Mullen vintage costume jewelry
Born in New Jersey in 1938, Judith Woracek is a talented New York-based illustrator, writer, anthropologist, and jewelry designer.
In 1959, Judith graduated from Vassar College, where she studied anthropology. An artist by vocation, she has always been interested in painting, creativity, and jewelry. After graduating from college, she worked in a variety of roles, from art director to magazine illustrator.
Her first husband, Thomas Donald Barry (1936 – 2014), with whom she had lived for ten years, was a writer and publicist. She was then known as Judith Woracek Barry. The second marriage to documentary film editor and maker John P. Mullen lasted from 1976 until his death in 2008. In the 1980s, a mother of four children, Judith began creating her author’s costume jewelry under the name Judith Woracek Mullen. Her company Judith W Mullen Designs, was located at 224 West 35th Street 805 New York, NY 10001. Decorations created in the 1980s are museum-worthy pieces of art. Handicraft, unique design, high quality workmanship and limited quantity make these vintage pieces highly collectible.
END_OF_DOCUMENT_TOKEN_TO_BE_REPLACED 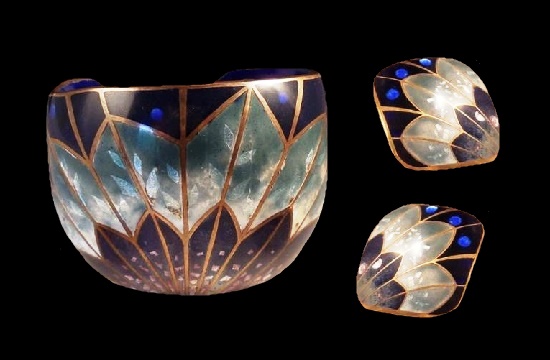 David Kuo vintage costume jewelry
Los Angeles, California based renowned enamel artist and owner of Kuos Jewelry, David D. Kuo (born 1950), created unique handmade jewelry from the 1980s and 1990s. Wearable art, his products were sold in expensive department stores, high end boutiques, and art galleries, such as the Smithsonian Museum. Traditionally, the designer marked his bracelets, earrings and necklaces with “Champleve David Kuo” scrawled on the back.
Based on cloisonné enamel, his “Champleve” enameling technique is innovative. Foil is placed under the translucent enamel, which gives the product an iridescent shine. The designer learned this technique from his father, renowned artist Ming Kuo (b. 1918). The Kuo family has perfected and modernized ancient techniques to create their own unique designs and colors. Also, for necklaces the designer used natural stones and art glass. Noteworthy, each piece of David Kuo jewelry is unique, where no two pieces of jewelry are exactly the same. Kuo’s jewelry is very popular with fans and vintage jewelry collectors all over the world.

END_OF_DOCUMENT_TOKEN_TO_BE_REPLACED 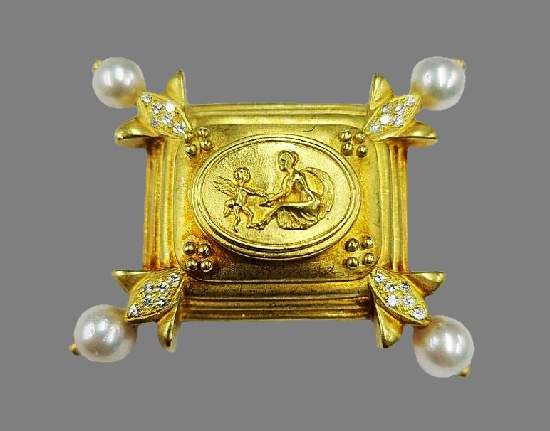 Doris Panos DP fine jewelry
Established in Melville, New York, fine jewelry company “DP Doris Panos Designs, LTD” was active from 1993 until 2016. Noteworthy, registered by her one more jewelry company “Doris Panos” at Port Washington, NY 11050, is still active.
As a schoolgirl, Panos began studying jewelry making at her relative’s factory. Next, she studied business and marketing at New York’s St. John’s University. While a student, she became interested in gemmology, the science dealing with natural gemstone. Also, she expanded her knowledge of the gemstone market and retail, which became useful in her future business.
In the mid-1980s, she worked at Saks Fifth Avenue, giving seminars and training for salespeople. A few years later, in 1993, she founded her own company, Doris Panos Designs, Ltd. Her first boutique on Long Island appeared in 2007, followed by several boutiques around the world. Panos’s designer collections, which use diamonds, precious and semi-precious stones, have been appreciated. So, in 1997 and 1998 she received the JA Jewel award, in 1999 the AGTA award and the Town & Country / Harper’s Bazaar Couture 1999 for the best pearl design.
According to Doris, her creations are for “The Woman Who Dares to Be Different”.
END_OF_DOCUMENT_TOKEN_TO_BE_REPLACED 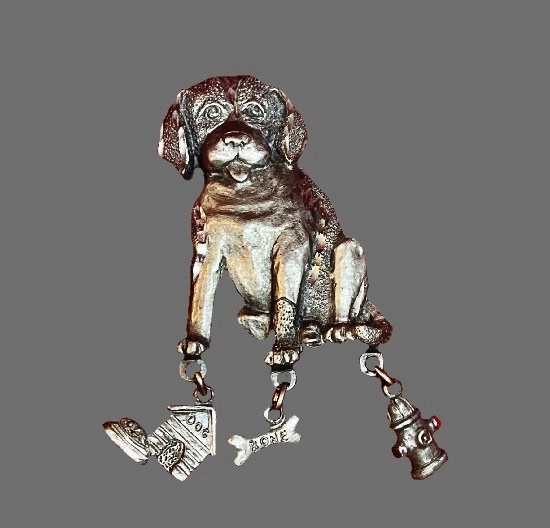 Signed Spoontiques vintage pewter jewelry
The history of the American jewelry brand “Spoontiques” began in 1971 in Massachusetts. An importer and wholesaler of a variety of giftware items, Spoontiques Inc. provided home decoration products – drinkware, kitchen, garden and home decor products and jewelry. Located at 111 Island St Stoughton, Spoontiques served customers in the state of Massachusetts. Noteworthy, for more than 50 years of its history, the company has registered two more trademarks. In particular, “A gift today, a treasure tomorrow” (1991-2016), and Pin Art (2002-2013).
Traditionally, the company’s craftsmen created figurines and costume jewelry with the use of pewter. Originally, they marked their pieces with “Spoon.pewter” or “Pewter Spoon.”, “USA”, and numbered them. Then the marking changed to “Pew.Spoontiques”, or “Spoontiques” and “Pewter”. Noteworthy, the company collaborated with other jewelers, who created similar designs, for example, Jonette Jewelry (1980s). Accordingly, these pieces have both markings “JJ” and “Spoontiques”.
The company made costume jewelry until 2000, and ceased to exist, due to bankruptcy in 2016. However, Kenneth Sawyer, current owner of Spoontiques, Inc. reregistered the company in 2018.
END_OF_DOCUMENT_TOKEN_TO_BE_REPLACED 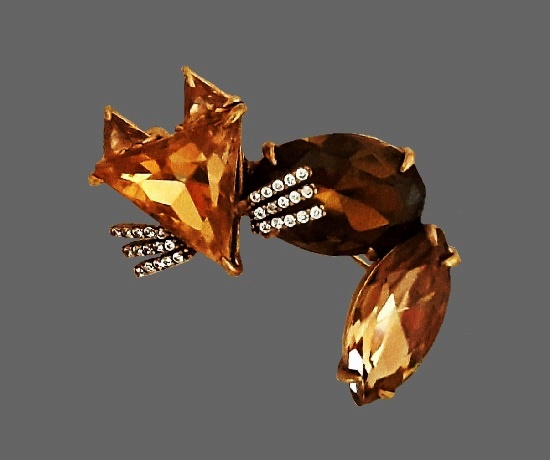 The history of the American jewelry brand “Banana Republic” began in 1978. Its founders are talented artists from San Francisco Patricia Ziegler and her husband Mel Ziegler (b.1956). Previously, they both worked for The San Francisco Chronicles, where Patricia was an illustrator and Mel was a reporter.
Originally, they named their family business “Banana Republic Travel & Safari Clothing Company”. Starting the production of leather goods, travel bags, umbrellas, walking sticks, etc., the company has achieved great success. However, five years later Patricia and Mel had to sell their business to “Gap Inc”.
Initially, the new owners shortened the company’s name to Banana Republic (Apparel), LLC. Also, they registered two jewelry trademarks “Banana Republic” and “BR” (in 1993 and 2004).
BR jewelry includes beautiful handmade statement necklaces, chains, cuff bracelets and dangling earrings. Traditionally, craftsmen used gold tone metal alloy, Swarovski crystals, Cubic Zirconia, rhinestones, enamel, resin, and art glass imitating natural stones. Noteworthy, the marking on each product consists of the initials BR, with a letter B turned backwards.
Undoubtedly, the BR company was the “favorite child” of Mel and Patricia, as in 2012 they published a book “Wild Company: The Untold Story of Banana Republic”.
END_OF_DOCUMENT_TOKEN_TO_BE_REPLACED 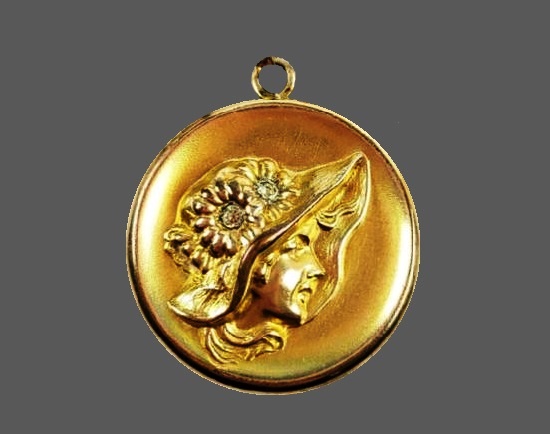 Bates and Bacon antique jewelry
Based in Attleboro, Massachusetts, “Bates & Bacon” is one of the oldest and legendary jewelry makers of the 19-20th centuries. Its history is inextricably linked with the history of the country.
Joseph M. Bates joined “Skinner, Viall & Company” (founded in 1857) in 1858. Since that time, the company’s name changed to Bates, Capron & Williams. Finally, in 1867, he headed the company, and in partnership with George M. Bacon renamed the company to “Bates & Bacon”. Initially, the company manufactured rolled gold plated bracelets, and since 1882 they began production of watch cases. Since 1907, Bates & Bacon belonged to Tappan brothers, and since the 1920s to A. S. Blackinton and F. E. Tappan.
The company, destroyed by fire in 1898 and rebuilt, has changed several owners and ceased to exist during the WWII. Their high quality gold filled pocket watch cases and jewelry, including rolled gold, filled and plated bracelets, are highly collectible now.
END_OF_DOCUMENT_TOKEN_TO_BE_REPLACED 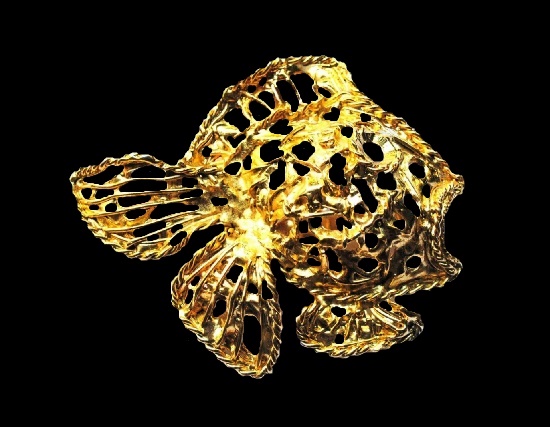 Signed Barol Paris vintage costume jewelry
The history of French costume jewelry marked “Barol” began in June 1985, when Fernand Barol (born on October 28, 1935) founded his limited liability company. He opened his jewelry shop Les Bijoux Barol at 21 Rue Tronchet, 75008 Paris.
Initially, he handcrafted gorgeous runaway fashion jewelry – large dangling earrings, brooches, pendants, necklaces and bracelets. Traditionally, the jeweler used high quality metal alloys of gold tone, as well as gold plating, art glass, mother-of-pearl, and rhinestones. The marking on the back side of each item includes “Barol Paris” on a rectangular cartouche.
Noteworthy, Barol created costume jewelry mostly in the 1980-90s, following the trends of Parisian fashion shows of famous couturiers. Large gold-tone jewelry complemented any dress, shoes, gloves, a hat, etc. Made for a short period in limited quantities, his statement jewelry is rare and collectible.
Wholesale jeweler, in addition to buying and selling fashion accessories, he was engaged in other business. Fernand Barol ran his businesses for about 40 years until his retirement. When Barol was 80 years old, his company ceased to exist (2015). According to sources, due to the bankruptcy.
END_OF_DOCUMENT_TOKEN_TO_BE_REPLACED