Jewellery designer David Webb
American self-taught jewellery designer David Webb has become the quintessential Jeweler and an iconic figure in the world of high fashion and jewelry art of the XX century. Born in North Carolina in 1925, he is the founder of the eponymous jewelry house David Webb. According to Webb, he began to think about creating jewelry in childhood. The boy, who was then living in the American town of Asheville, often visited his uncle – a talented jeweler who owned a large studio. Even then, the young Webb interested in the secrets of stone cutting that fascinated him with its magnificence and mysteriously flickering facets. Uncle taught his curious nephew David some of the secrets of jewelry that fascinated Webb more and more. When David was 17, he was the first time in New York – a city of contrasts, that won the novice jeweler by its beauty and grandeur. Webb decided to stay in New York. For a long time, David has worked in this city as a goldsmith and jewelry designer, and achieved considerable success. Godsend for Webb was a meeting with Antoinette Quilleret, French wealthy lady, and a fan of luxury jewelry. She could see in a young jeweler talented and original master with a great future. In 1948, with a helping hand of Antoinette Quilleret was founded David Webb, head office on 57th Street to Madison Avenue. Several years of hard work have not been in vain for Webb – about his company learned many Americans, and indifferent to the beautiful jewelry women bought David Webb jewelry sold like hot cakes. Despite the enormous dedication, to call David Webb constant man was no way. Webb’s works show a great variation in the colors and forms of jewelry. In the very first collection of David Webb called “Menagerie”, can be traced motives of animal world. The line of jewelry includes rings, earrings and other items depicting different animals: pandas, frogs, dolphins, zebras, butterflies. Later, the “animal” theme will be reflected in other collections of Webb, which will occupy a niche in the vast world of jewelry, but the success of the first collection Menagerie they will unlikely to ever be able to outshine. David Webb was a true experimenter. In the fine jewelry David Webb “get along” such seemingly incompatible materials as shells, rock crystal, coral and … Gold, silver and platinum. Of course, before Webb combined precious metals and base materials, but in jewelry from David Webb, they look quite different – harmonious and very beautiful. David Webb has created many wonderful jewelry pieces, and one of them is not only famous in the animalistic style decorations – among the works of popular designer and jeweler there are also ethnic jewelry and jewelry in classic style.

In his heyday in the 1960s, David Webb pieces were often seen on the red carpet worn by Hollywood actresses – Elizabeth Taylor, Doris Duke, Princess Grace of Monaco, Jacqueline Kennedy Onassis, and even generations of Vanderbilts and Rockefellers, Barbra Streisand, Helen Mirren, Jennifer Garner, Beyonce and Sofia Vergara. His jewelry pieces appeared on Lana Turner, Doris Day and Susan Hayward wearing them in the films Madame X, The Thrill of it All and Backstreet. Webb’s motifs – dragon bracelets of yellow gold, Maltese cross brooches and animals made in bold and unique style were a perfect choice for filming. The iconic New York jeweler was 50 years old when he died of pancreatic cancer in 1975. The brand David Webb lives on. For a long time (almost 35 years) the head of the company David Webb was friend and “peers” of Webb – Nina Silberstein and her family. During her “reign” the company began expansion and growth in new markets, such as Beverly Hills, Kuwait and Houston. The house continues to draw from his archives, and his original designs are still in production. Estate jewelers Mark Emanuel, Sima Ghadamian and Robert Sadian purchased the business in 2010. 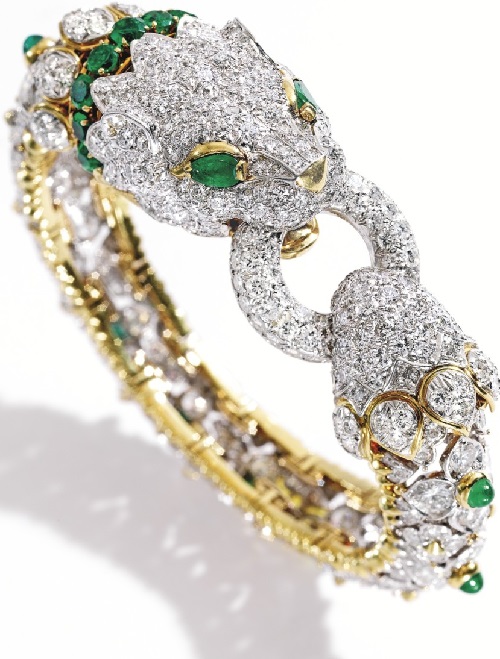 The adventurous David Webb’s designs were based on ancient Greek, Roman, Egyptian, pre-Columbian, Indian and Chinese civilizations. Such inspiration he got staying in the Metropolitan Museum of Art for hours. His bold use of color utilized oversized pieces of coral, turquoise and jade, as well as ruby and emerald beads. Webb jewels are certainly not for the shrinking violet. There is nothing delicate, subtle or understated about them, and the woman who chooses Webb has confidence in her style and a definite point of view.

Almost all jewelry produced by the company, encrusted with diamonds and rubies. The large assortment of David Webb jewelry include accessories with gems such as turquoise and jade, however, very few of them. These ornaments are not suitable for everyday use – combined with everyday clothes, they will look a little ridiculous, but the accessories with precious stones perfectly complement the elegant evening gown or other luxury outfit. 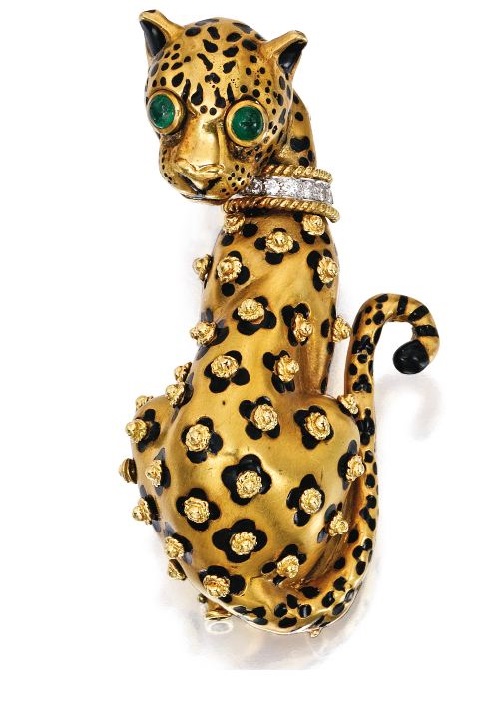 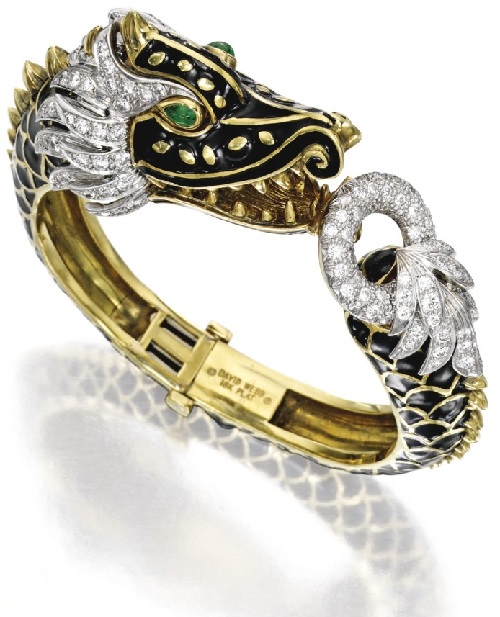 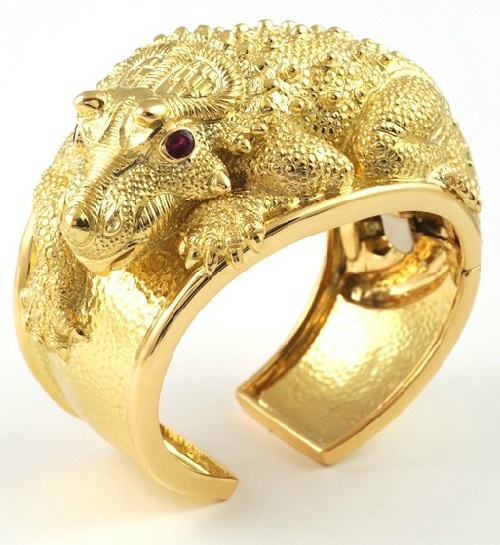 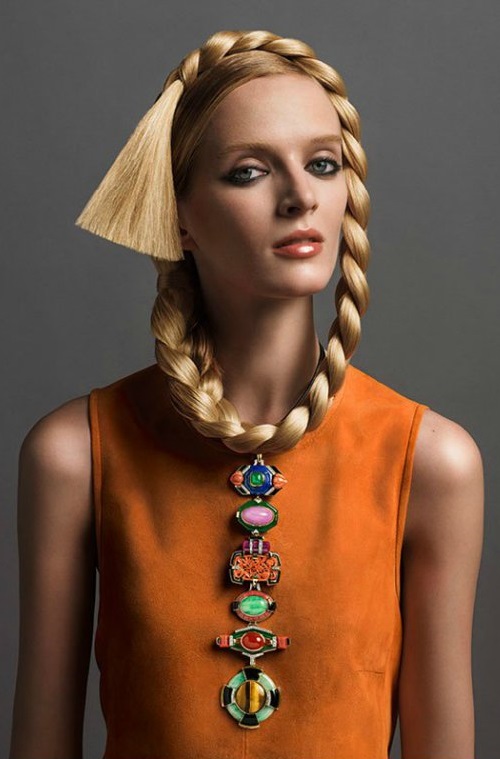 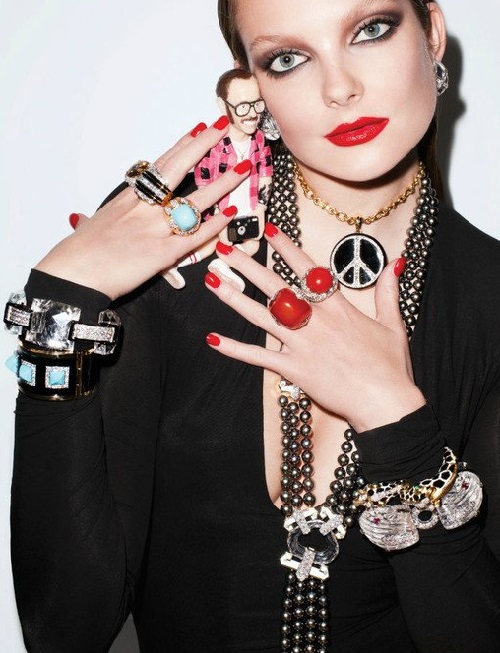 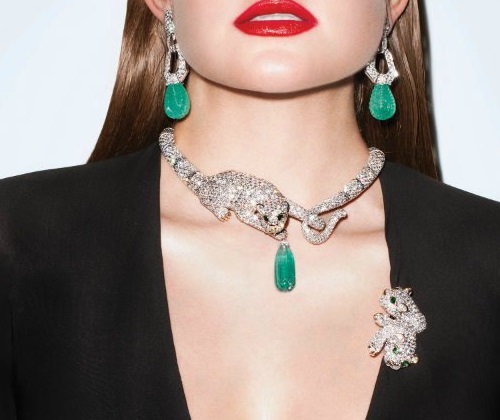 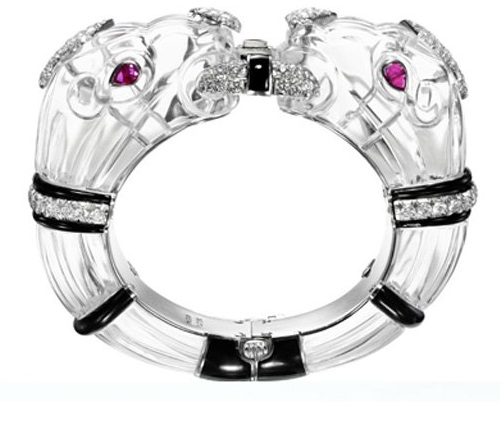 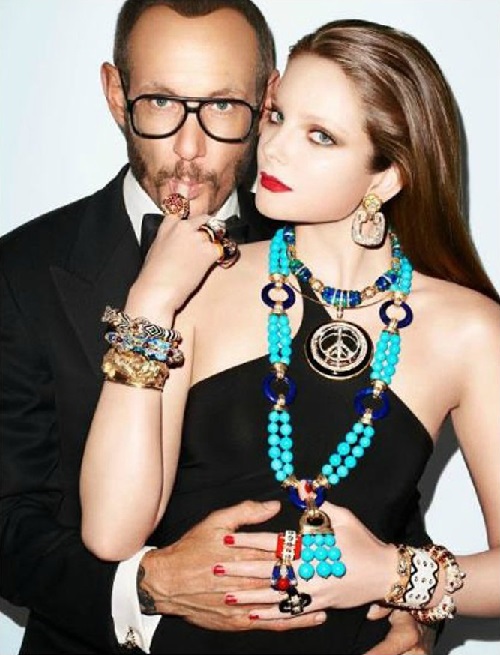 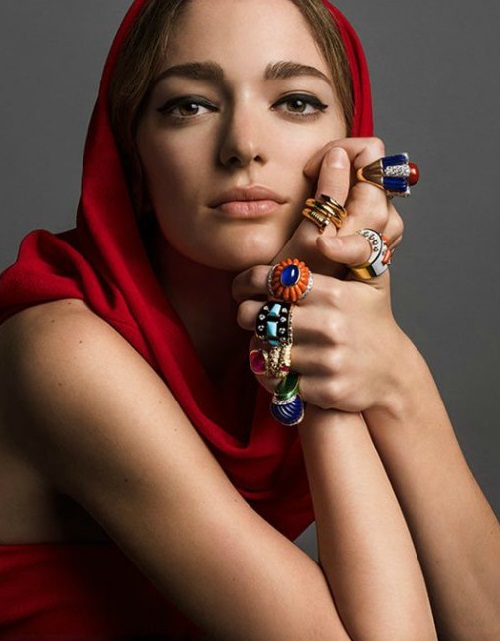 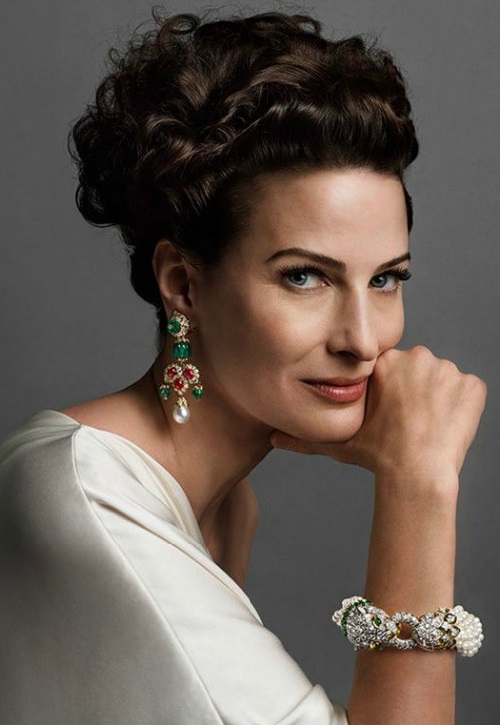 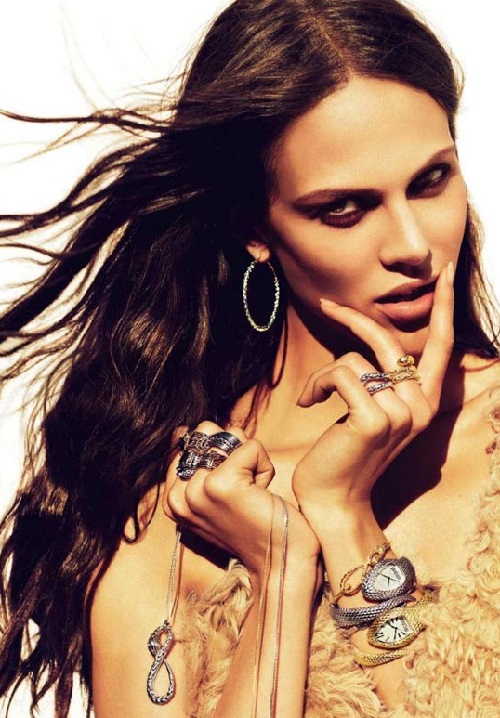 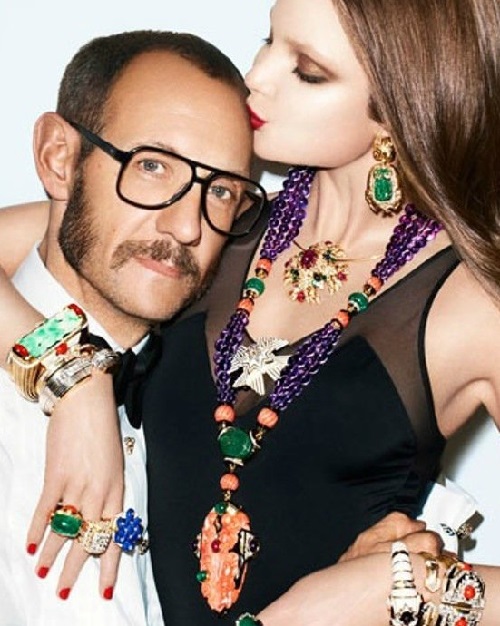 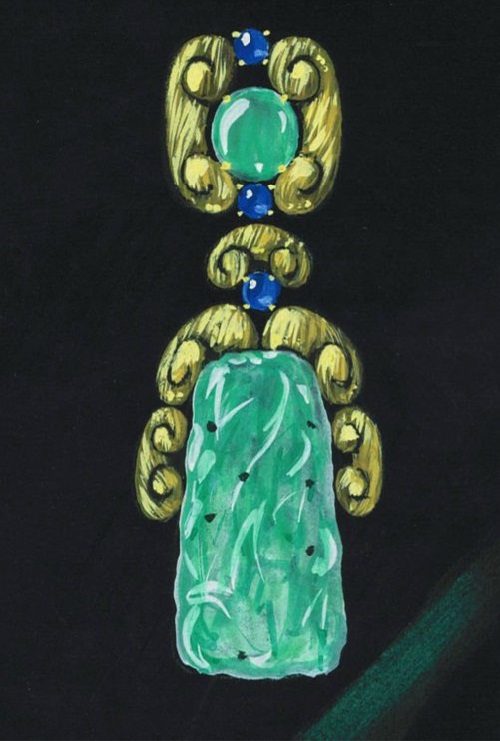 Sketch of a pendant 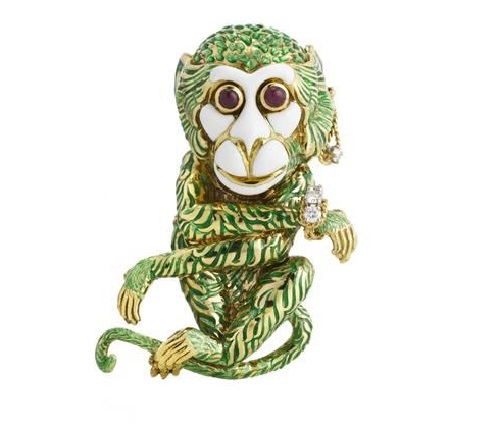 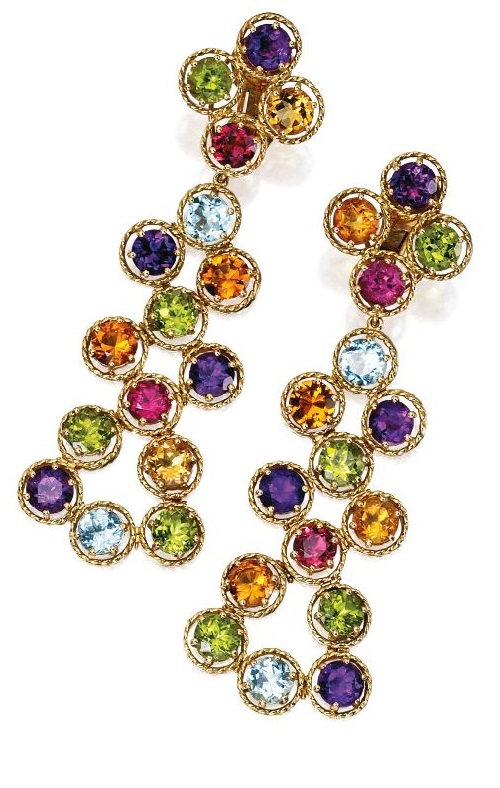 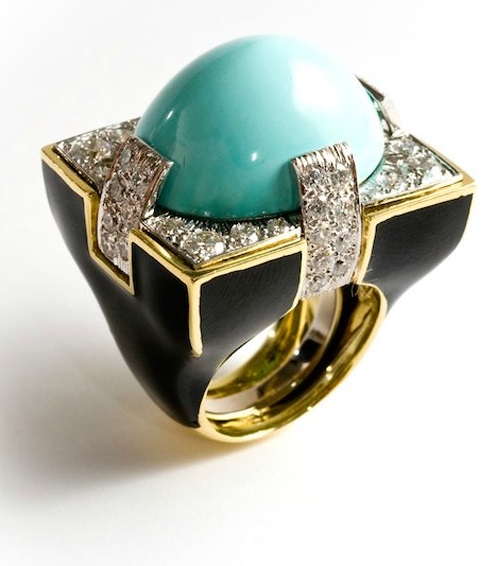 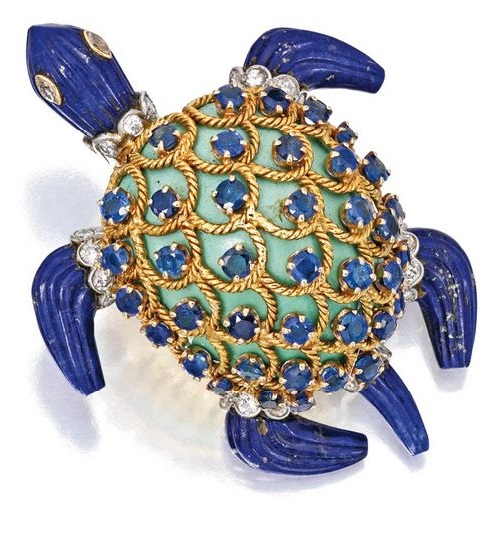 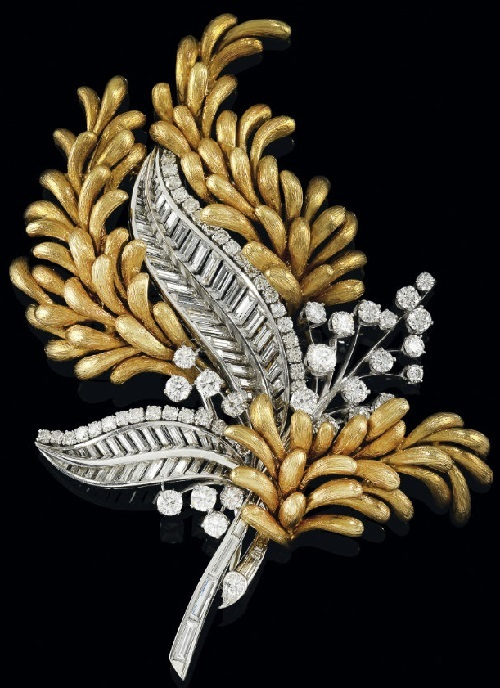 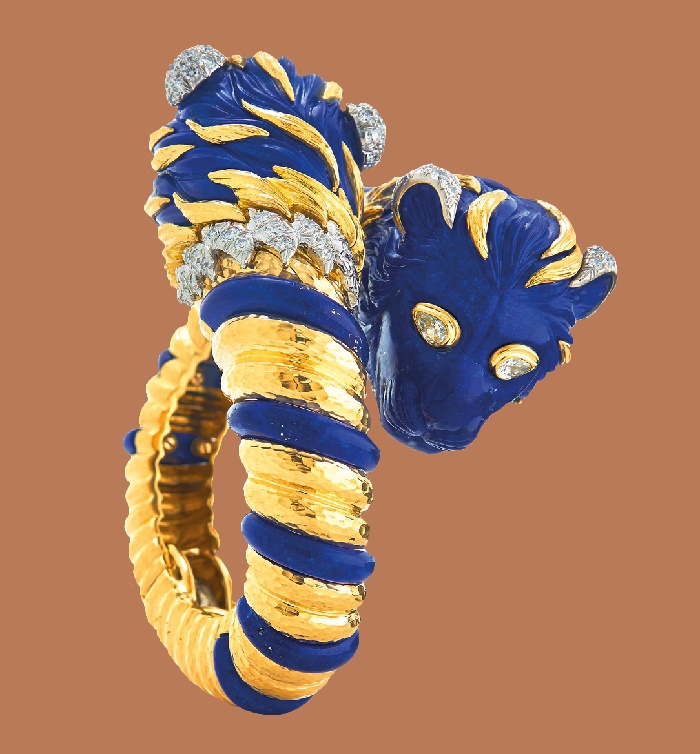 A pair of gold clippings with enamel and ruby cabochons from the collection of the Duchess of Windsor. 1964. New York

Bracelet made of gold with turquoise and diamonds. 1960s

Three pairs of earrings of gold and shells from the collection of the Duchess of Windsor. 1964-1965. New York