Frida Kahlo jewellery
The famous Mexican painter of Spanish, Indian and Jewish origin, Frida Kahlo had a collection of jewelry. She lived a few years in the US, where she bought Indian jewelry. The basis of her collection – rings and necklaces of bone, turquoise. The artist searched real antiques from pre-Columbian era, however, often these things cost very cheap. Many photos and self-portraits depict her rings, necklaces and bracelets. Frida wore multiple rings on her left hand, because it was uncomfortable to wear them on the right hand, they interfered with paint. Frida could wear a very little clothing, but there was always a lot of jewelry. Multiple rings on her left hand

On her wedding day, she wore a white lace wedding dress, and then the maid came in a green dress with a red shawl! It was the traditional Mexican dress. The Mexican then sewed clothes of cheap cotton fabrics, but boldly combined colors (like now). Therefore Frida put off her expensive fashionable dress with laces and dressed in a simple cotton bright green dress with a red stole. Her image became iconic, she became that real Frida, whom we used to see – in bright, cotton and cheap dress! it was not only her political beliefs, but also the feeling of the people’s patriotism! She wore lots of rings on her left hand

Frida Kahlo, was born in Coyoaca´n, a suburb of Mexico City, in 1907, the daughter of a German-Jewish photographer and an Indian-Spanish mother. Despite her European background, Kahlo identified all her life with New World, Mexican heritage, dressing in native clothing wherever she traveled. Injured in a bus accident at the age of 15, Kahlo was disabled for life. After numerous operations to correct her spinal and internal injuries, she eventually became an invalid prior to her death at the age of 47. 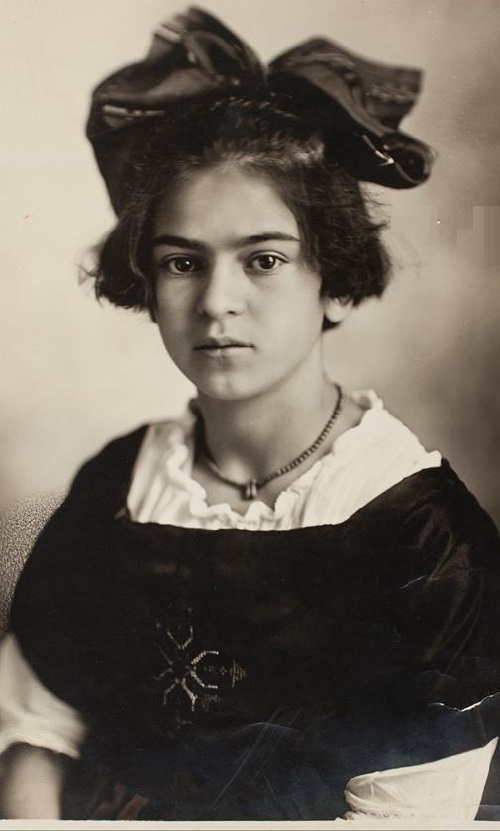 Kahlo incorporated elements of Mexican folk art into her paintings. Thematic content often takes precedence over a fidelity to realism, and the scale of things represents symbolic relationships rather than physical ones. Reoccurring themes of earthly suffering and the redemptive cycle of nature reflect the mixture of Spanish Catholicism and Indian religion prominent in Mexican culture. Kahlo’s color, while naturalistic, is flat and dramatic. 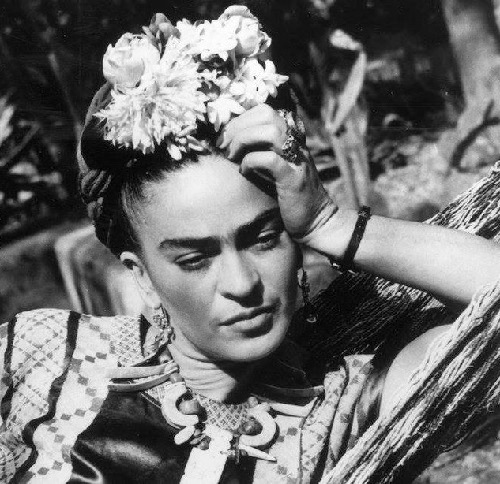 Early in her life her work and reputation as an artist were overshadowed by her relationship to Rivera, who was older and famous before they met. She also seemed conflicted by her sense of duty to him as a wife. In the late 1930s she asserted her independence from him, and in 1939 they were divorced, only to be remarried a short time later. This event served as an important theme in her work of the period. 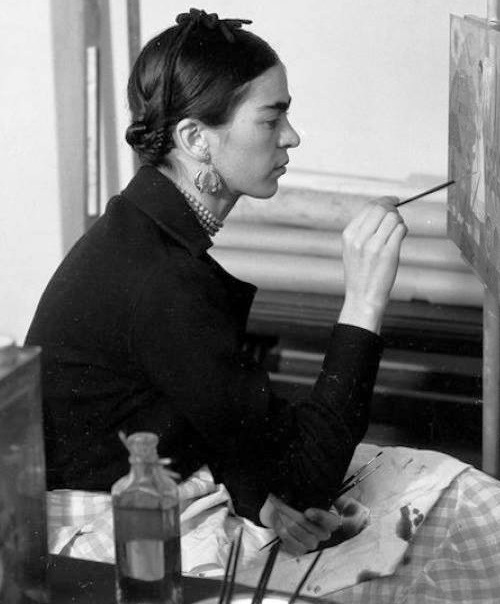 While painting, her right hand was free of any jewellery

In contrast to Rivera, who was relatively wealthy from his work, Kahlo had great difficulties supporting herself from the sale of her paintings. Together they led a flamboyant life in Mexico and during their trips to the United States. They were at the center of Mexican cultural life in the 1920s and 1930s when Mexican artists and intellectuals were rediscovering their own heritage and rejecting European ties. 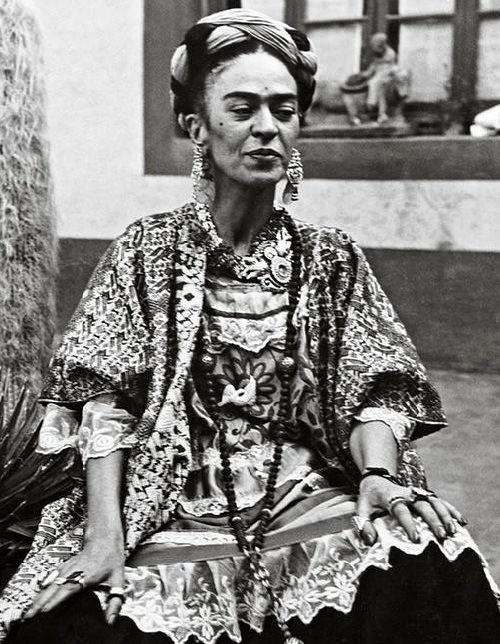 A true jewellery lover. A ring on every finger, massive earrings and long beads

Like her husband, the muralist Diego Rivera, Kahlo maintained a life-long commitment to leftist politics, and in the 1930s she accompanied him on several trips to the United States where he was commissioned to do murals in New York, Detroit, and San Francisco. The most controversial of these was a mural for Rockefeller Center which was cancelled because it included a portrait of Lenin that Rivera refused to remove. Kahlo died in Mexico City in 1954. After her death in 1954 her reputation grew in Mexico and diminished in the United States, a time when communists and their sympathizers were discredited. 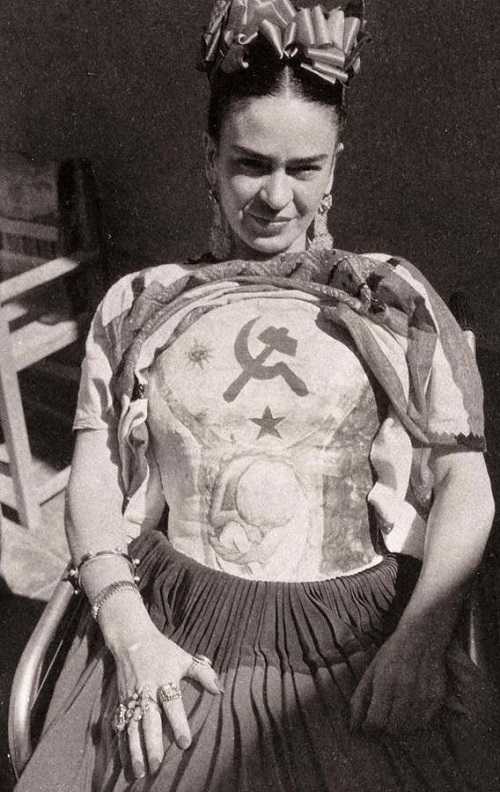 When didn’t paint, Frida wore multiple rings and bracelets on her right hand as well 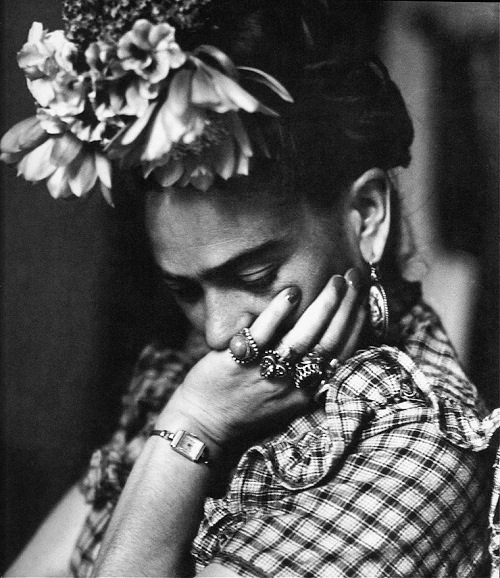 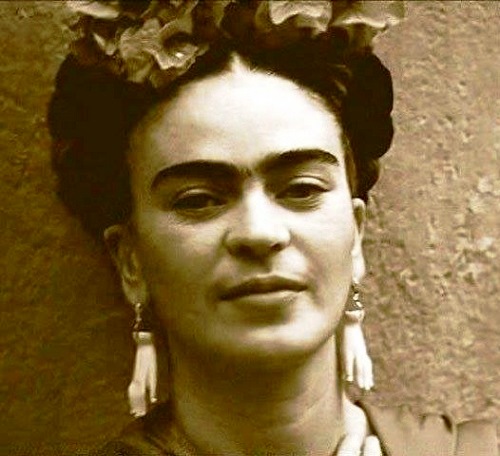 Unusual earrings in the form of hands 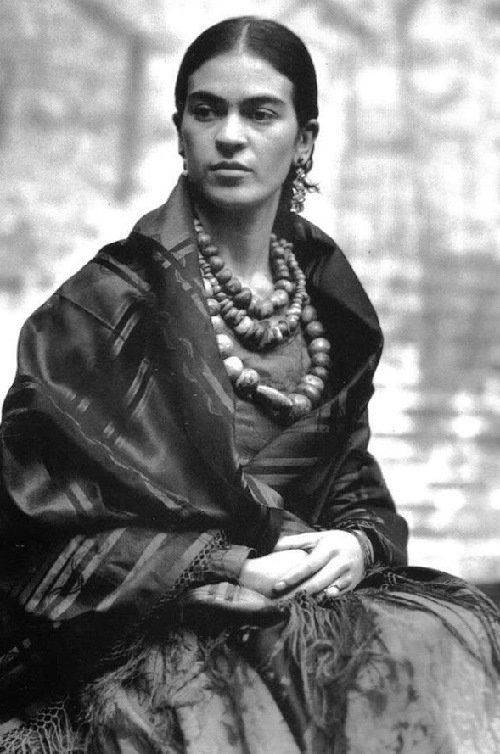 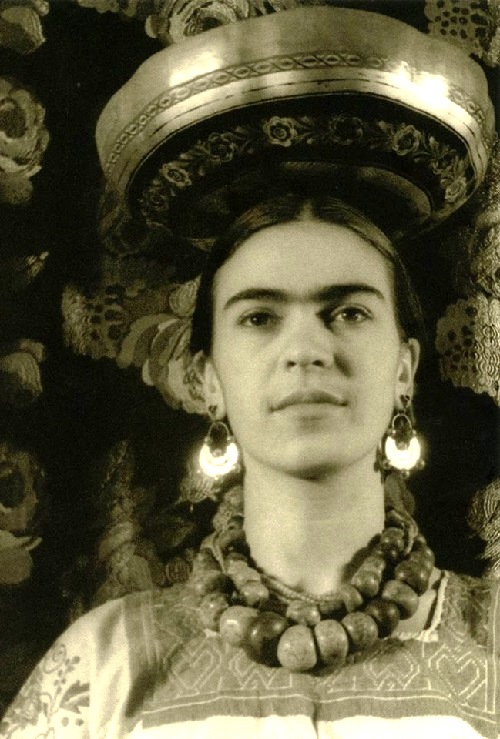 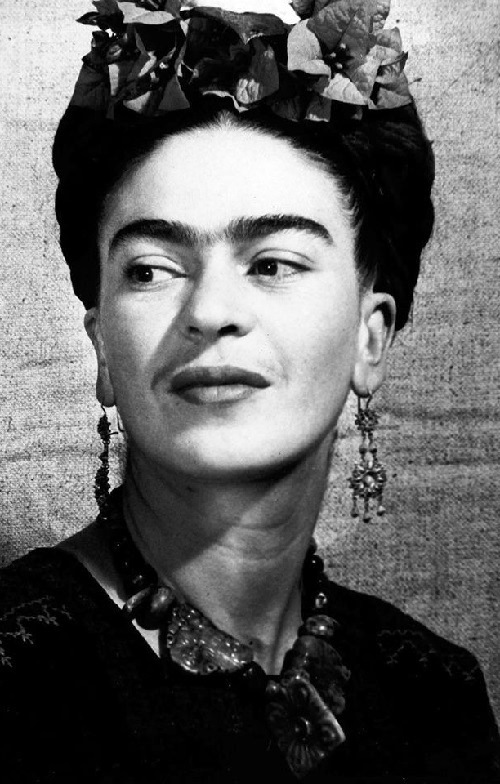 Her decorations were unique 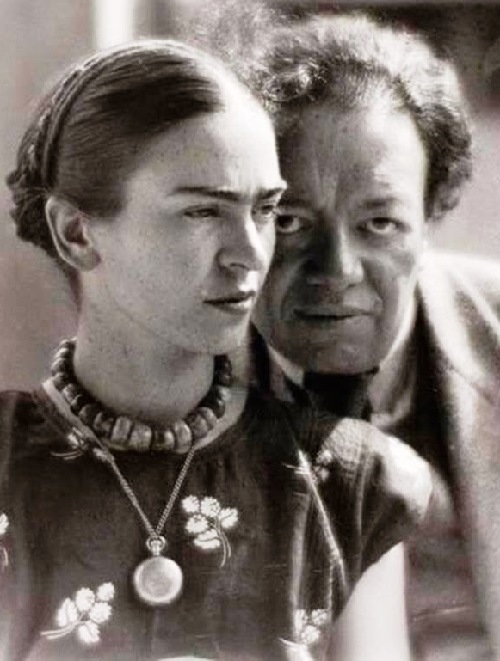 Alongside with beads – a chain with a pendant. Kahlo and Diego Rivera 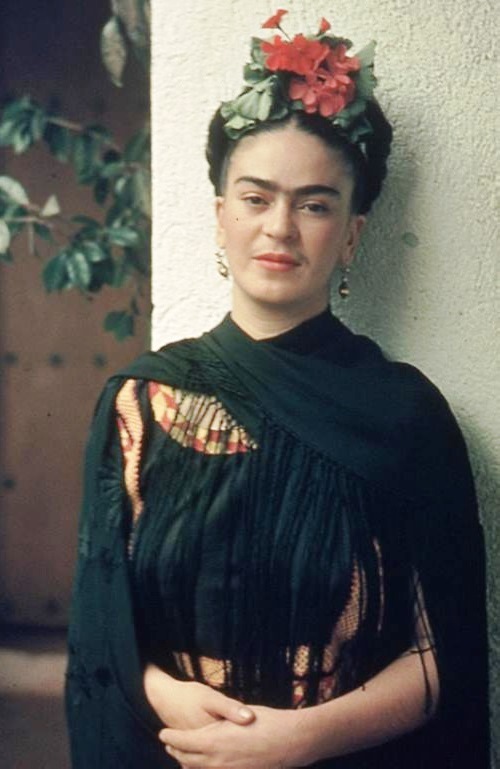 Traditional element of her decorations – hair decorated with flowers 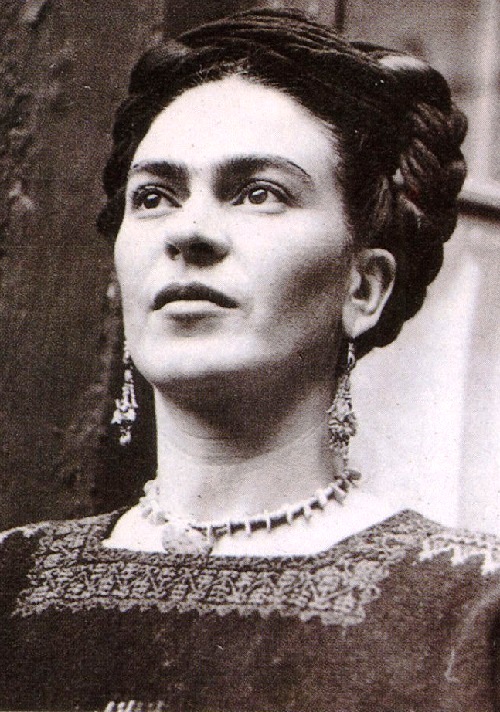 It’s impossible to see the artist without any decoration, she was a true jewellery lover 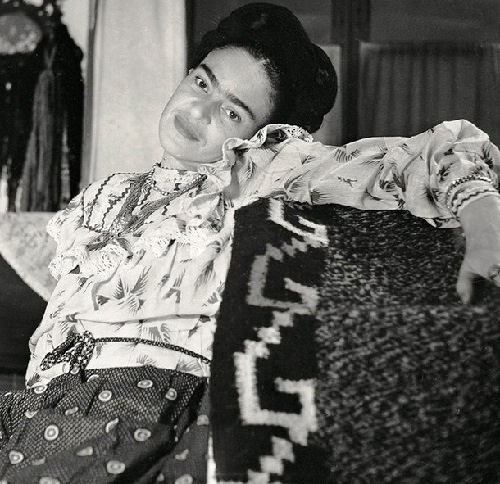 Bracelets, beads, necklaces, earrings and of course, rings – this is Frida 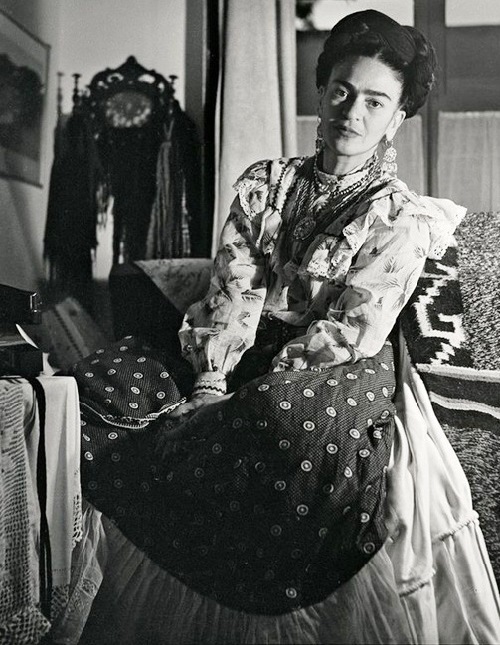 The mandatory elements of her dress – necklaces or/and beads 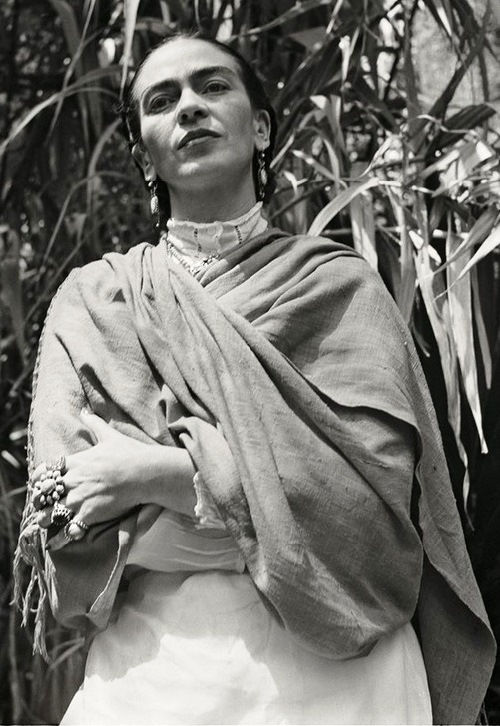 Rings of different shapes and sizes decorated her fingers 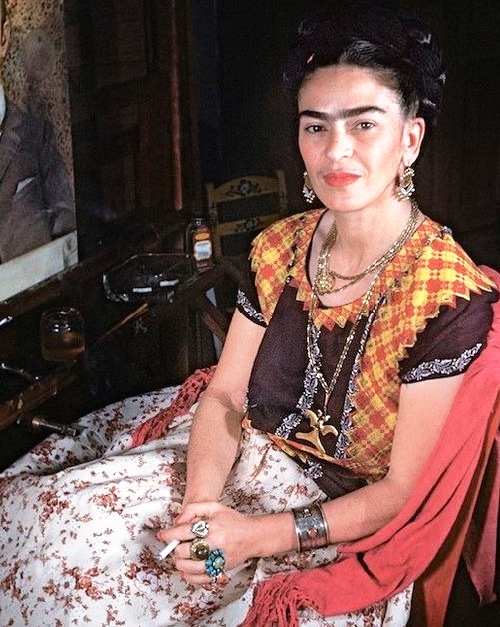 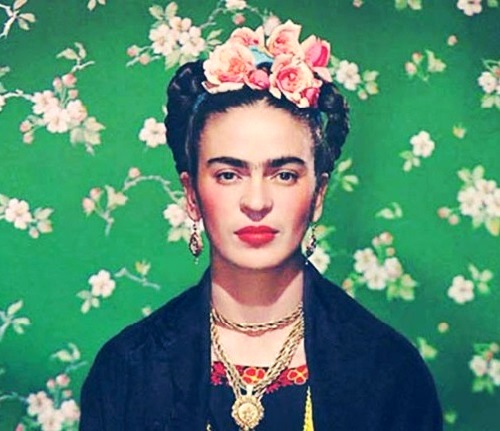 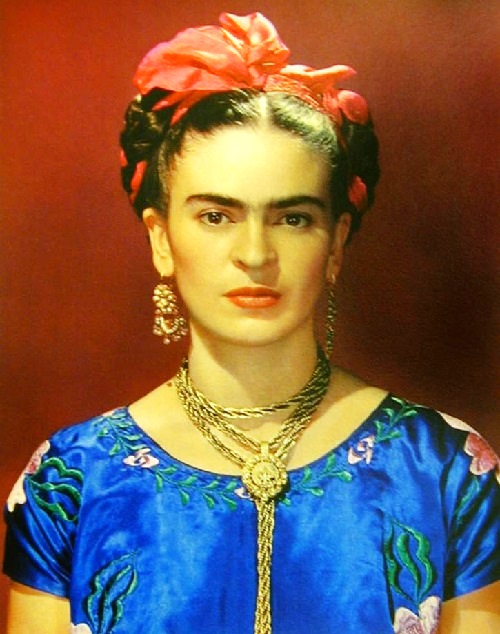 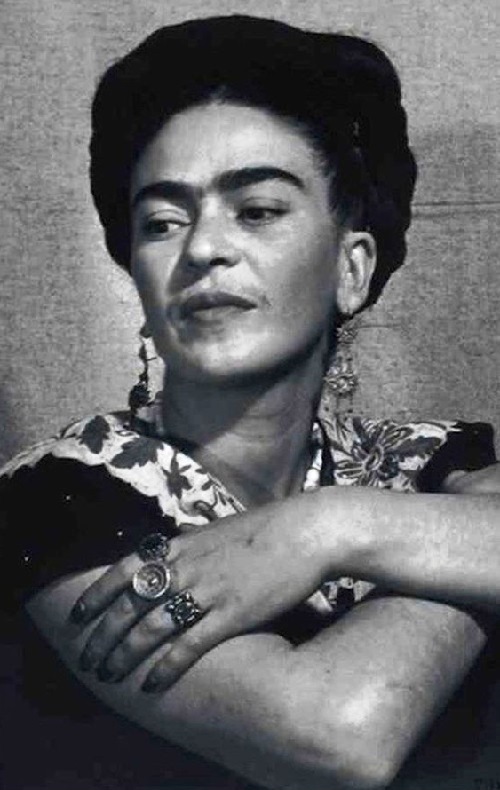 The variety of rings amazes 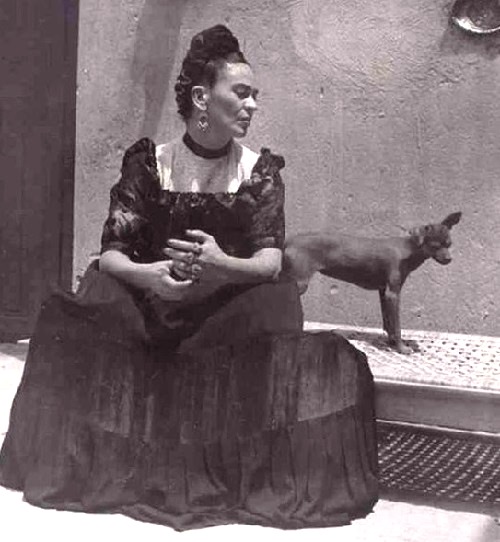 Black and white photo with a dog 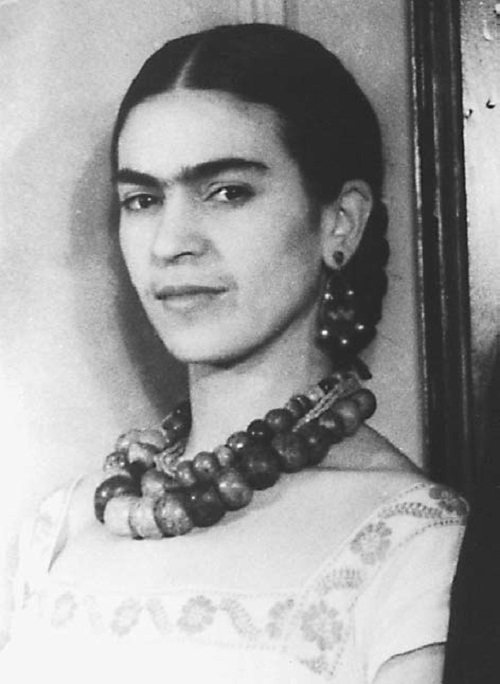 She was passionate about jewellery 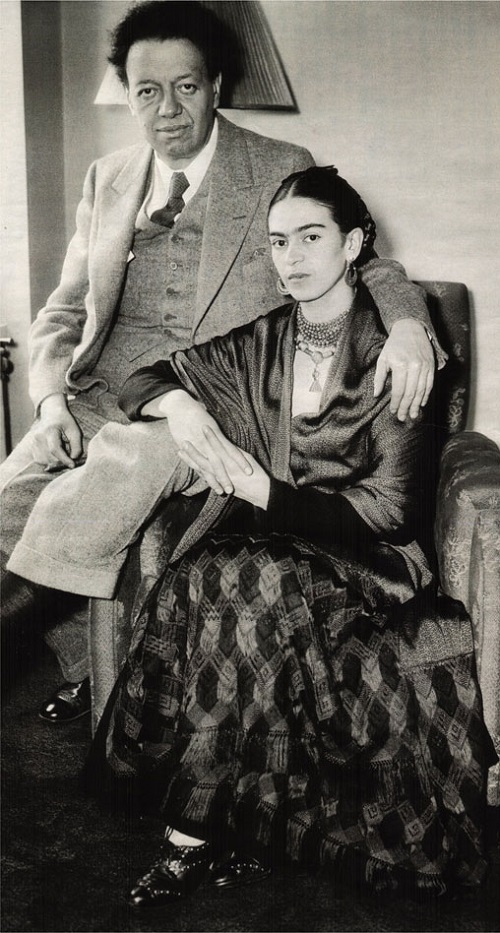 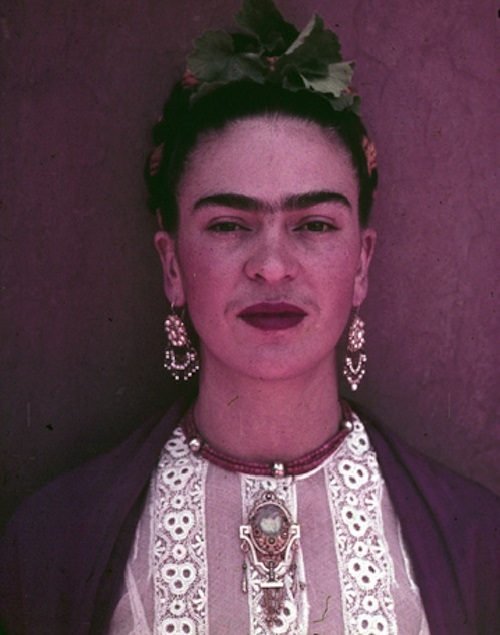