« What can jewellery tell about its owner
Tatiana and Ben jewellery » French jewelry designer Jean Schlumberger
Born in Mulhouse, France, Jean Schlumberger was the son of Paul Albert Edward Schlumberger (1877 – 1952) and Elizabeth Schoen (1884 – 1942), who worked in the textile industry. Already in his youth, Jean showed talent for drawing, but his parents tried to discourage him from the artistic activity, forbidding him to undertake formal training.
In 1930, his father sent his son to Berlin to be engaged in banking activities. However, Jean finds a complete lack of interest and talent for numbers, and soon moved to Paris. In Paris, Schlumberger began to create jewelry with porcelain flowers and precious stones. He gave these products to his friends, among whom was Marina, Duchess of Kent. Later, she became the permanent representative of his works.
In 1930, thanks to Marina, Elsa Schiaparelli noticed the talent of the young designer. She hired him to create jewelry and buttons for her surreal collections. Also, he began to collaborate with Jean Cocteau, Salvador Dali and Louis Aragon. From these meetings future famous jeweler began his professional career. 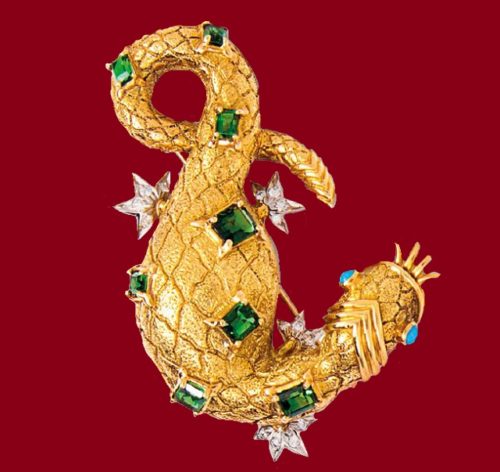 First design work of Schlumberger with precious metals and stones is a gold lighter in the shape of a fish with precious stones as eyes and a flexible tail. In 1941, Jean creates a brooch for his friend Diana Vreeland, the legendary editor of women’s fashion magazine Vogue. This brooch features an oval-shaped amethyst, ruby ​​shield warrior, inlaid with diamonds, bow, arrows and spears, and a sword on blue enamel studded with small rubies. 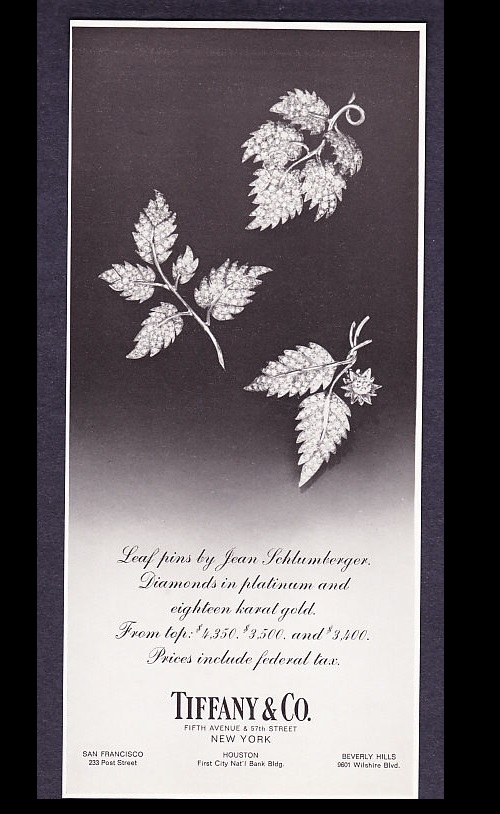 During the Second World War Schlumberger joins the French army, which included participating in the Battle of Dunkirk. Then, he was under the command of General Charles de Gaulle in England and the Middle East in the Free French Forces.

After the war, Schlumberger moved to New York and began to design clothes for Chez Ninon. In 1947, he opens a jewelry shop on the street 64, along with his business partner and childhood friend – Nicolas Bongard (1908 – 2000), nephew of Paul Poiret. Soon Schlumberger’s works in the form of sea creatures and birds, decorated with precious stones, more and more can be found on the most fashionable women of the time. Their choice in favor of his works made such glamorous fashionistas as Babe Paley, Elizabeth Taylor and Countess Mona Bismarck. Diana Vreeland said about Schlumberger the following (she friendly called him “John”): “He so well understands the fantastic beauty of the world that he is not a fantasist. The world is a fantasy; Johnny is a realist”.

In 1956, the president of Tiffany & Co. Walter Hoving offered to Schlumberger and his friend Nicolas Bongard to join the company as vice-presidents. Jean had been allocated to a separate studio, decorated in his taste. It was there that the famous jeweler had access to unlimited supplies of the best colored stones and freedom of action that fully revealed his potential. Schlumberger gave free rein to his imagination and created the most beautiful designs in his career. 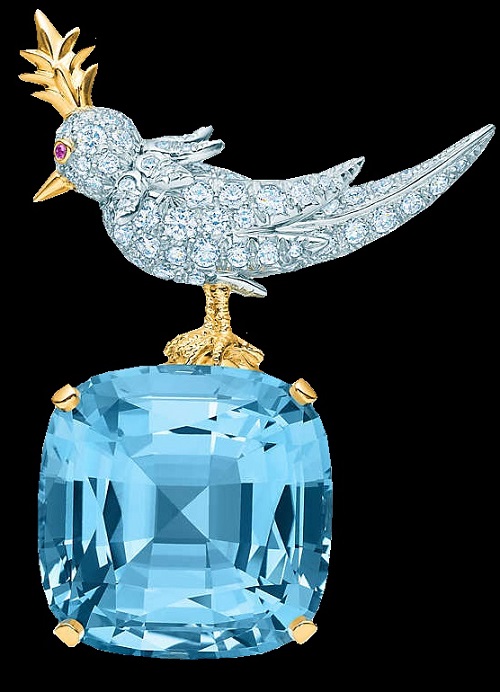 Bird on a Rock Clip

Being an excellent draftsman and a perfectionist, Schlumberger begins to create jewelry from sketching in order to detect the purity and elegance of natural forms, which attracted his attention. Sketch, he said, serves as “the only link between the three members of this complex and disparate trio – client craftsman and creator.” The final detailed drawing was subsequently reproduced in the form of products decorated with precious metals and stones.
Schlumberger’s work differs in bizarre interpretation of natural forms and is characterized by dynamic forms, asymmetry, fluidity and the use of different colors. Especially inspired Jean the theme of the sea: sea urchins, stars, shells and anemones. Diana Vreeland wrote that Schlumberger “appreciate the beauty of gemstones. For him, they are the means of realizing his dreams.” Schlumberger often visited countries, such as Bali, India and Thailand in order to excite his imagination. The result of these trips were a variety of charming souvenirs, such as exotic brooch «Oiseau de Paradis» of beryl, amethyst, sapphire and emerald brooch and «Sea Bird», combining the bird’s head and body of a snake with feathers of gold weighing 18 carats, diamond-encrusted and rubies. 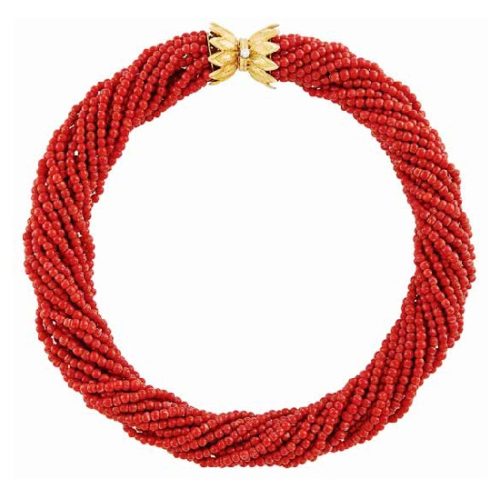 In 1962, as a gift for Christmas for Jacqueline Kennedy, President John F. Kennedy bought from Tiffany & Co. famous “two fruits” brooch, created by Schlumberger. It consisted of two strawberries with stems of rubies, and diamonds (76 crystals Swarovski, gold plating 999, 24 carats). Jacqueline Kennedy wore this decoration during the first trip to Canada.

Being a great innovator, Schlumberger revived enameling technique called paillonné, the essence of which is to achieve a translucent colors by superposition of enamel gold weighing 18 carats. His gorgeous enameled bracelets of red, blue and green colors were key accessories of wardrobe of every stylish woman.

Schlumberger died August 29, 1987 in Paris and was buried in the cemetery at one of the churches on the island of San Michele. 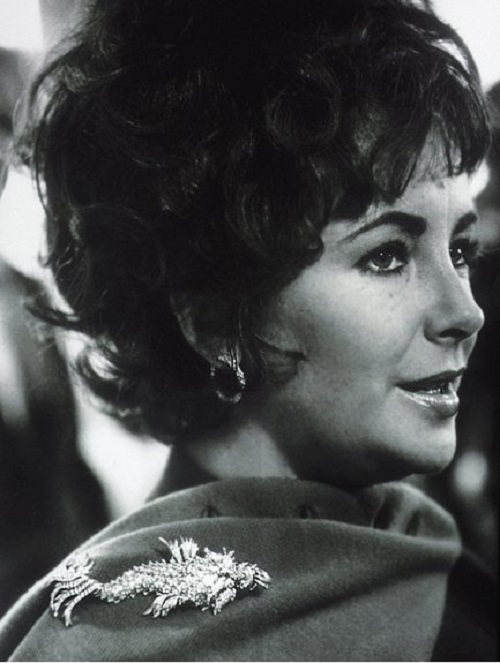 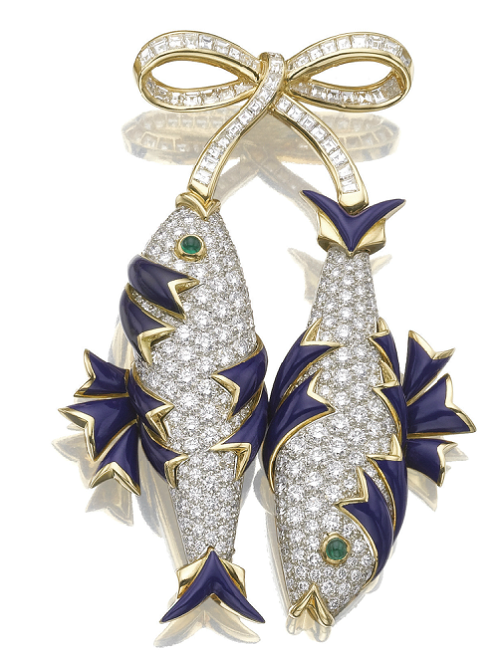 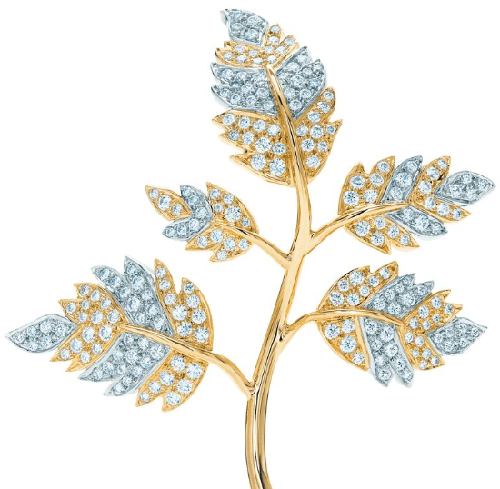 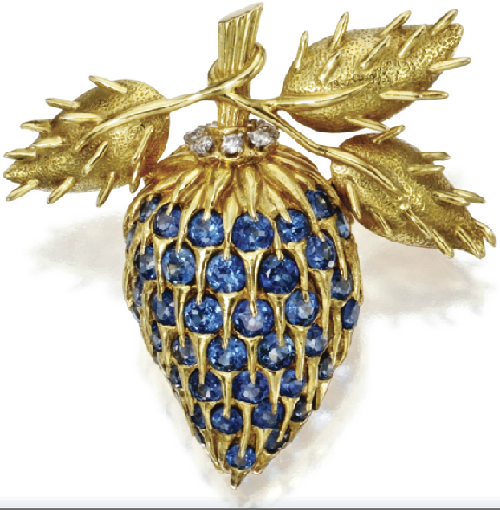 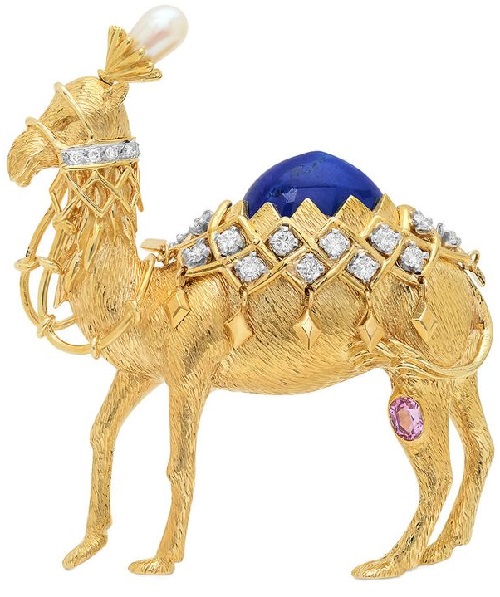 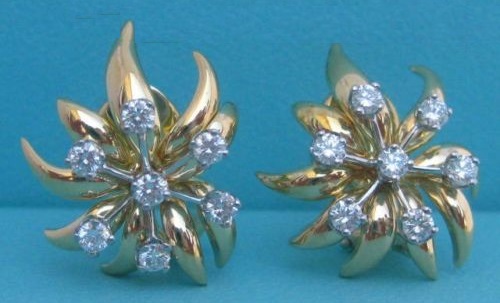 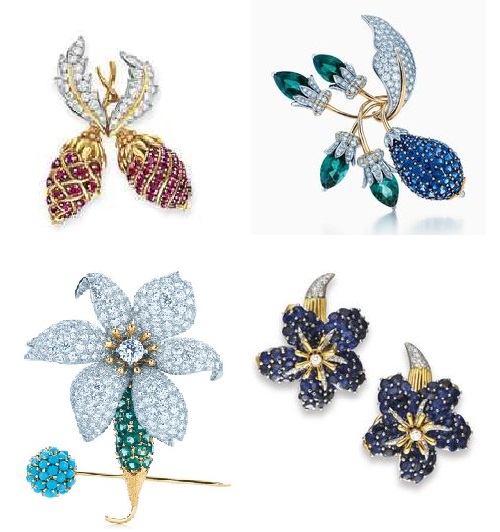 A set of Schlumberger jewellery 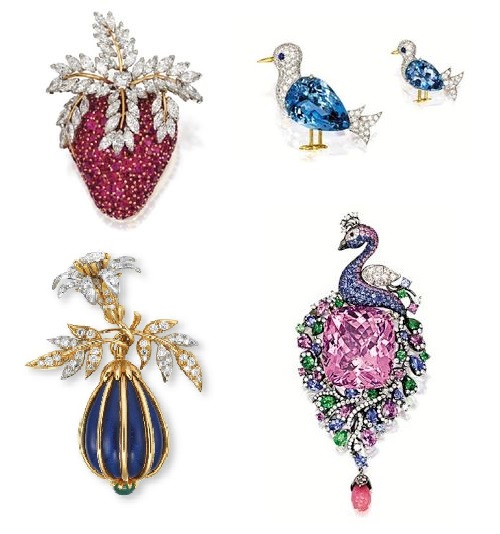 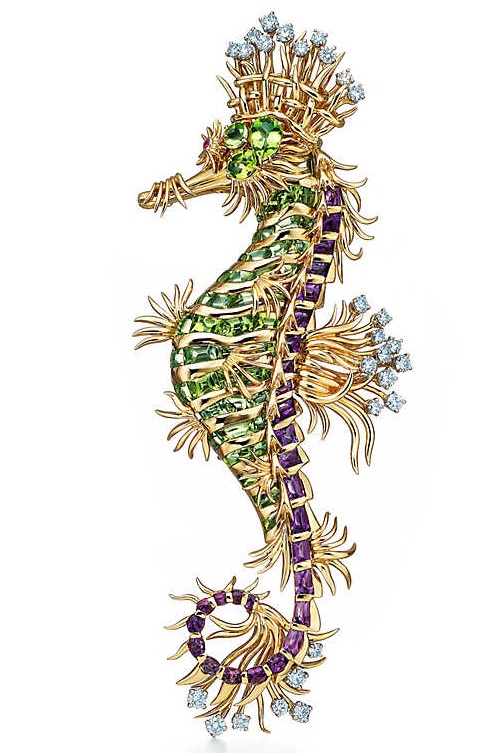 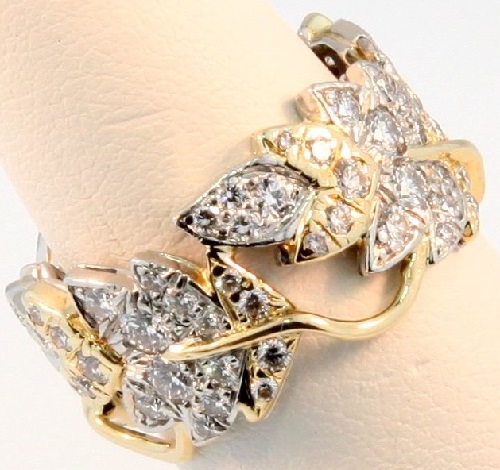 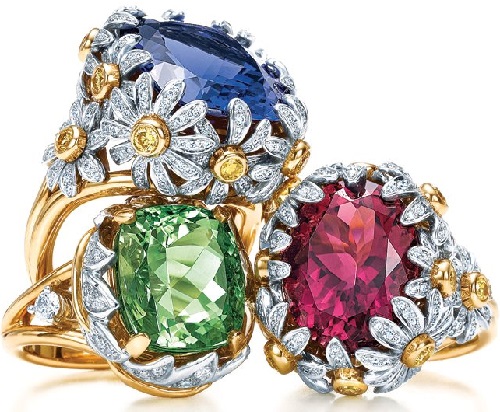 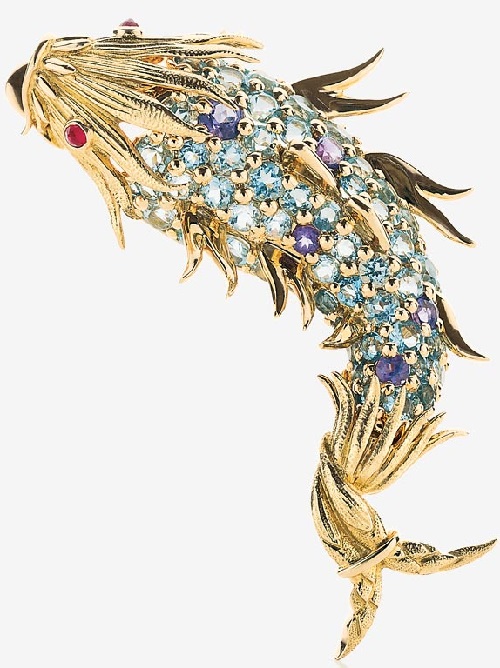 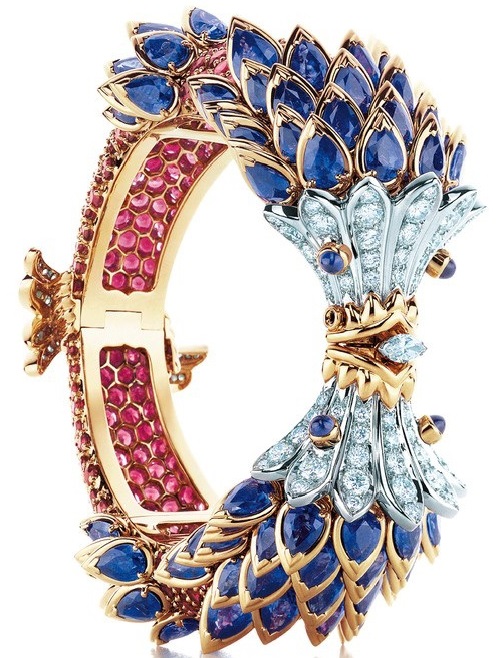 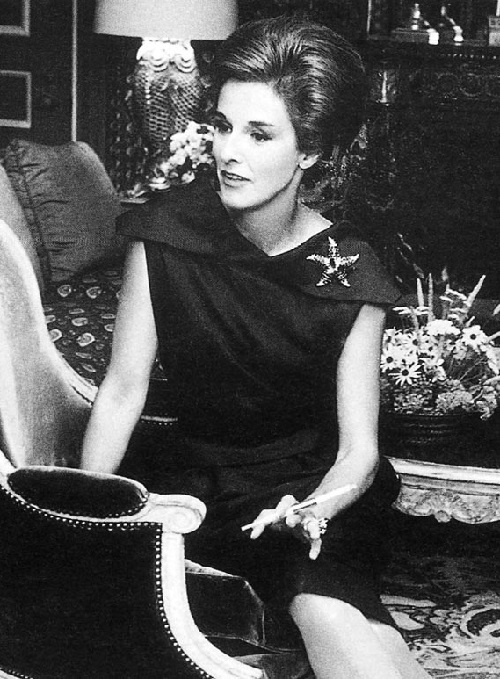 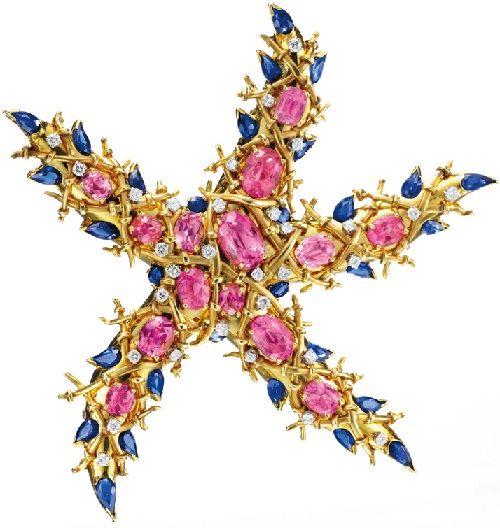 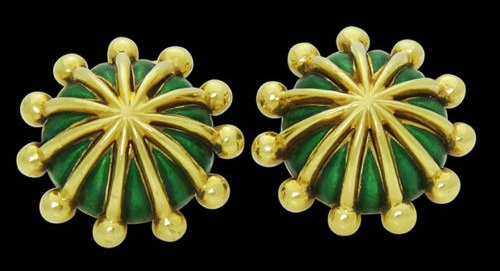 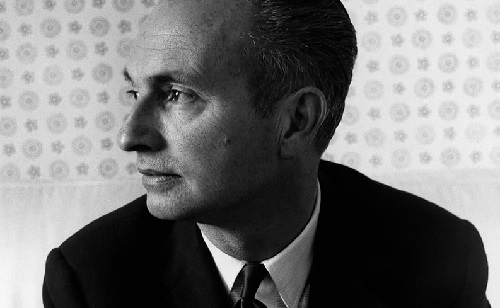