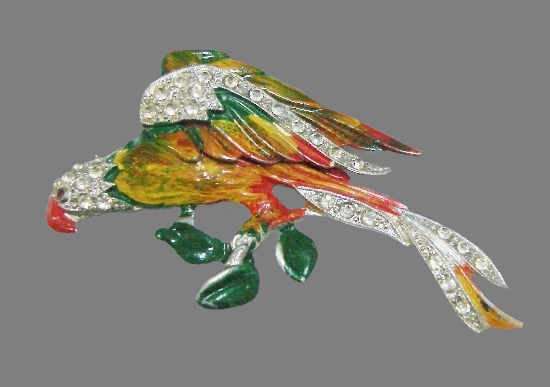 Parrot on a branch brooch. 1940s. Gold tone jewelry alloy, rhinestones, red yellow and green enamel. 8 cm. Jose Rodriguez vintage costume jewelry. Marked at back with letter ‘S’ in a Star and ‘Made in USA’ 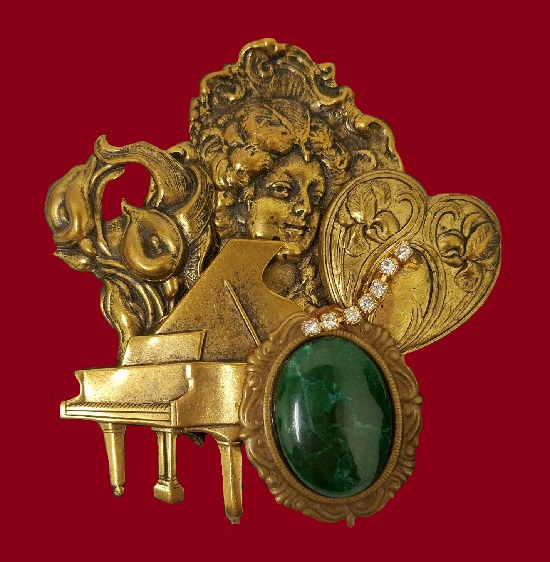 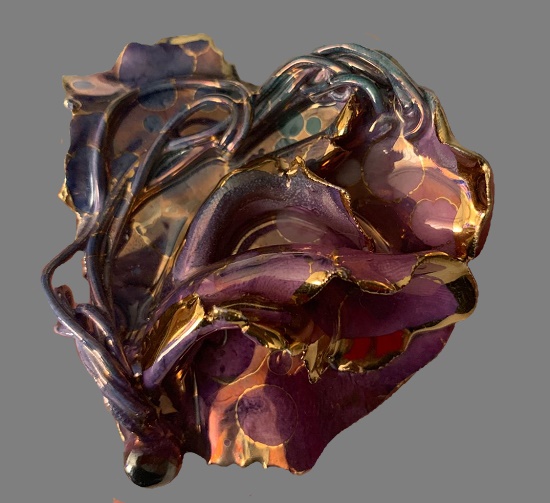 Amy Lacombe vintage costume jewelry
Los Angeles, California based artist Amy Lacombe is a philologist by profession, she graduated from Loyola Marymount University. However, instead of teaching French Language and Literature, she chose creativity, and in particular jewelry design and ceramics. Starting her design career in 1983, she has created unique hand-made porcelain jewelry that leaves no one indifferent. She sold through major department stores, online shops and catalogs. Noteworthy, most Amy Lacombe jewelry pieces which she created in 1980-1990s, have become collectible vintage.
According to Amy, the main inspiration for her creativity were her husband Bruno Lacombe, their two children, dogs, cats and nature. Loving people, animals, and color, she is grateful to be able to express this passion through her art. “I hope it brightens your day”, says Amy. Undoubtedly, it does. Now the artist, passionate animal lover, prefers working with ceramics and in particular creating bright figurines of animals, and mostly cats.
END_OF_DOCUMENT_TOKEN_TO_BE_REPLACED 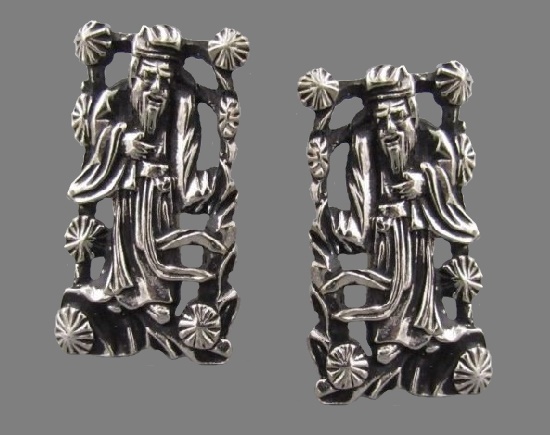 Founded in 1897 in Attleboro, MA as Attleboro Manufacturing Co., the Swan company specialized in the manufacture and sale of women’s jewelry. Very soon, there was a great fire that destroyed the factory and the whole area of ​​the city of Attleboro. Fortunately, some decorations and machines were saved. So, the company moved production to a nearby building, which remained the center of business for the next 100 years.
Originally, the company didn’t manufacture men’s jewelry at all. However, in 1908 the company created a new division called Baer and Wilde, which focused on the production of men’s jewelry. And one of their lines, in particular, “Kum-A-Part” became highly popular.
During the Second World War, the company made a feasible contribution, making medallions for soldiers and other emblems for the army. At the same time, the men’s jewelry line has gained real popularity, and they even stopped making the women’s line.
END_OF_DOCUMENT_TOKEN_TO_BE_REPLACED 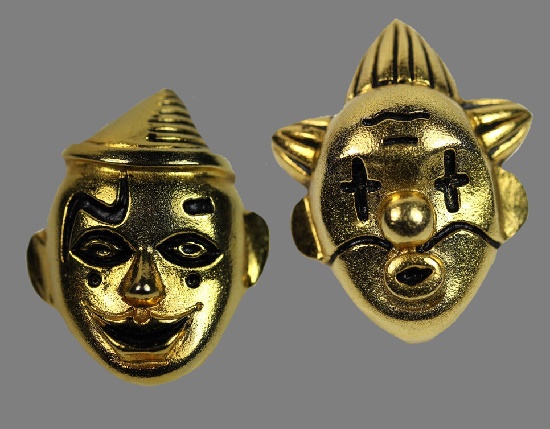 Made in limited quantities to a certain season, Isabel Canovas jewelry has become vintage rarity, highly collectible and valuable for jewelry lovers. Born in 1945 in Paris, French fashion designer, stylist and jeweler Isabel Canovas began her career very early. First, it was the famous Hermes company, and then she worked at Vuitton’s (in the 1970s). Also, she has worked as head designer for Christian Dior (for ten years). Finally, aged 37, she opened her own boutique located at the fashionable Avenue Montaigne in Paris. Later, she expanded her business to Madison Avenue in New York and in Madrid.
Most famous of her jewelry lines include Circus, African and tribal designs, as well as pieces inspired by nature. Traditionally, the Parisian designer labeled her products with the full name “Isabel Canovas”, or added the name of a certain decorations. Thus, each of her clown brooches have a name, for example, Alex and Quito (the above photo), marked on the back side.
Noteworthy, in 1992 Isabel Canovas ended her design career with the closure of her stores.
END_OF_DOCUMENT_TOKEN_TO_BE_REPLACED 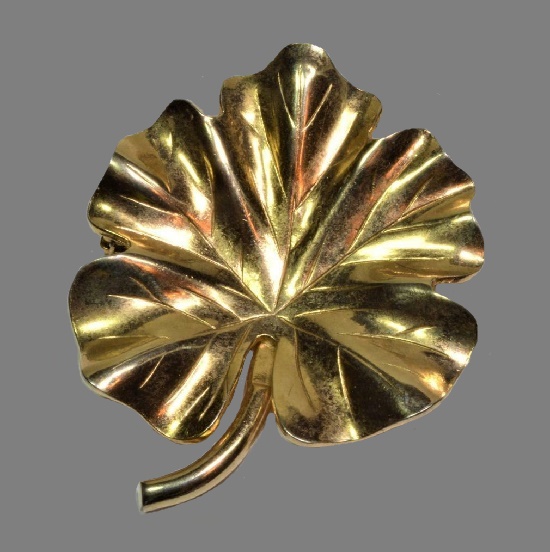 Marino vintage costume jewelry
Located in Pawtucket Rhode Island, American jewelry company Marino Jewelry Co. Inc. was active in the middle of the last century. Founded in 1932, it ceased to exist in the late 1970s. Noteworthy, the last mention of the company and an advertising poster with its decorations appeared in Vogue magazine in September 1978.
However, according to other sources, Marino Manufacturing Company, located in the capital of the jewelry world – Providence, Rhode Island, was active from 1957 to 1983. Perhaps these were two companies of the same name that produced costume jewelry in the middle of the 20th century. Besides, this explains the various markings on their decorations. In particular, some vintage items have marking “By Marino”, while others – simply “Marino”.
Traditionally, Marino-marked jewelery is high-quality products made from textured or polished metal of silver or gold tone. Exquisite design, attention to detail made these bracelets, brooches and necklaces very popular with lovers of costume jewelry. Also, Marino jewelry design included artificial pearls and cabochons imitating natural stones. Undoubtedly, Marino vintage jewelry is a rarity and desired for collectors. Accordingly, the price of Marino decorations will only increase with each passing year.
END_OF_DOCUMENT_TOKEN_TO_BE_REPLACED 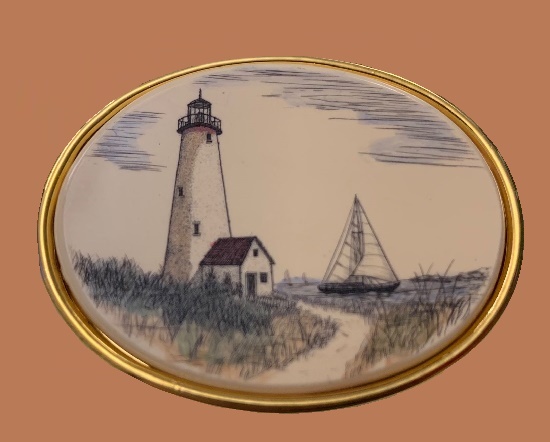 Traditionally, Stephen Barlow made his oval-shaped brooches on ivory-colored polymer base. Stunningly beautiful hand-painted plots included motifs inspired by nature – landscapes, birds and flowers. Collectors and lovers of vintage jewelry especially appreciate Barlow’s decorations of the 1980s-1990s. They have a special poetic and extraordinary beauty.
Opened in Providence in 1978, Barlow Desings, Inc. was a small design studio that created exquisite collections of jewelry. Also, gifts and accessories depicting Stephen Barlow’s engravings made in the scrimshaw technique. Especially popular and desirable among Americans are gifts for men from Barlow Desings. Among them stylish money clips, tie pins and sets of cufflinks, pocket knives, key rings, and much more. Traditionally, Barlow brand jewelry includes high quality and original design with various themes: sports, marine, floral or retro and so on. Artfully tinted by hand, each drawing or pattern emphasizes the beauty of engraving.
END_OF_DOCUMENT_TOKEN_TO_BE_REPLACED