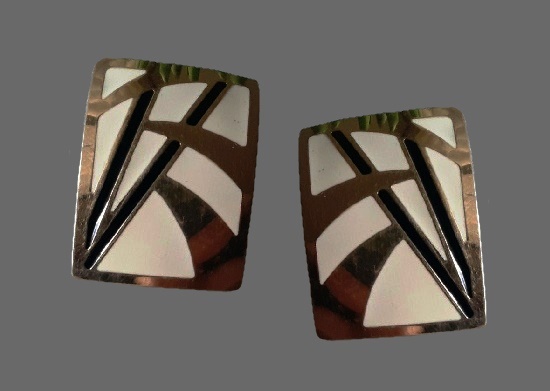 Lawrence Bott vintage costume jewelry
The history of San Francisco, California based jewelry company Lawrence Bott Inc. spans a fairly short period of fifteen years. Registered on July 1, 1977, the family owned company ceased to exist on Feb 26, 1992. The president of the company was Lawrence’s relative Lucha Oziel Bott (born in 1948).
Lawrence himself handcrafted costume jewelry for several years working in a variety of materials and styles. A renowned jewellery designer of the eighties, he produced elaborately geometric design jewelry, and mostly earrings. Traditionally, he used gold or silver tone alloys, gold plating, multicolor enamels, and rhinestones. Signed L. Bott, his earrings appeared in fashion press, for example, Cincinnati Magazine (Apr 1984). According to the 1986 press, “Laurence Bott is a perfectionist. He brings obsession into every tiny stage of production and into every choice of the smallest nuance of his elegant jewelry. He makes special jewelry.” His perfectionism meant that metal processing was always manual, and not machine stamping. Noteworthy, the gold plating consisted of three times plating, which corresponded to the industry standard. Also, his perfectionism meant that his company created 300 new designs every year. According to Mr. Bott, earrings should adorn the face, not the shop window. Sold in the best boutiques and luxury department stores, such as Nordstrom, and Macy’s, his jewelry is collectible vintage now.
END_OF_DOCUMENT_TOKEN_TO_BE_REPLACED 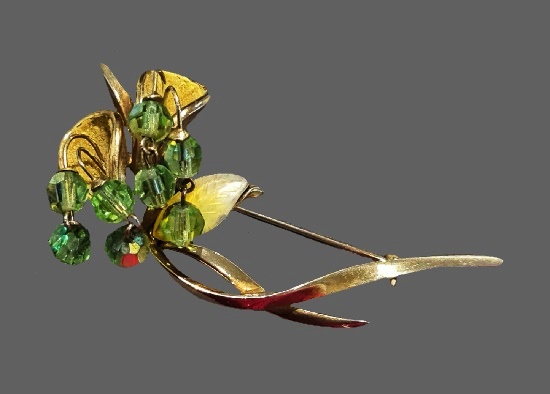 The history of “Arcansas” jewelry brand began during WWII, when a Hungarian couple of Joseph and Elizabeth Reimer immigrated to Australia in 1939. Liz, who had learned goldsmith skills from her father, dreamed of her own jewelry business. First, she created costume jewelry in her dining room, and in the garden tent. However, in 1952 she founded her family business “Elizabeth Reimer Pty. Ltd”. Located at 391 George Street, Sydney, the company with nearly 30 employees, handcrafted exquisite costume jewelry. Traditionally, they used metal alloys of gold and silver tones, as well as 14 K gold plating, glitter enamel, mother-of-pearl, crystals and rhinestones. The marking included cleverly hidden logo, and “Arcansas”, or “Elizabeth Reimer” in written letters.
After Reimer retired in 1969, the company ceased to exist.
Delicately soldered by hand, the collections feature Art Nouveau style. Noteworthy, the full range consisted of 30 individual flower designs and over 70 local plants. Appreciated for intricate workmanship, handcrafted detailing and traditional techniques, Elizabeth Reimer’s jewelry pieces attract collectors around the world.
END_OF_DOCUMENT_TOKEN_TO_BE_REPLACED 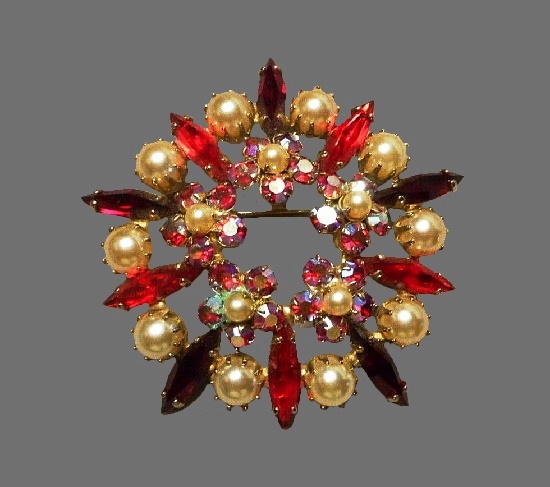 Sherman vintage costume jewelry
A descendant of jewish immigrants from Eastern Europe, Gustave Sherman (born October 15, 1910) began his career as a jewelry salesman in his native Montreal. His interest in the jewelry business led him to open “G. Sherman & Company LTD” in 1947. Gus Sherman began working in partnership with Ukrainian-born jeweler Dmytro Kuritza. Noteworthy, a professional jeweler, Kuritza was Sherman’s only employee for several years. Gradually, the company expanded and hired other craftsmen.
Traditionally, jewelers used triple rhodium plating, innovative gold plating and Austrian crystals. Handcrafted from high quality materials, their jewelry was very expensive. From the very beginning of the company’s work, the price of jewelry reached $ 50, which is 10 times more expensive in the equivalent of today’s money. Already in the 1950s, sold in boutiques and the most expensive department stores in Canada, their jewelry gained fame in New York and Paris.
In the 1970s, glamorous crystal jewelry became less popular, and geometric shapes made from alloys of silver and gold tones were in vogue. However, Sherman never allowed himself to “cheapen” his jewelry at the expense of materials and workmanship.
70-year-old Gustave Sherman retired in 1980, and the company ceased to exist. Four years later, in 1984 he passed away.
Due to the high quality and small editions, Sherman jewelry pieces have a high collection value.
END_OF_DOCUMENT_TOKEN_TO_BE_REPLACED 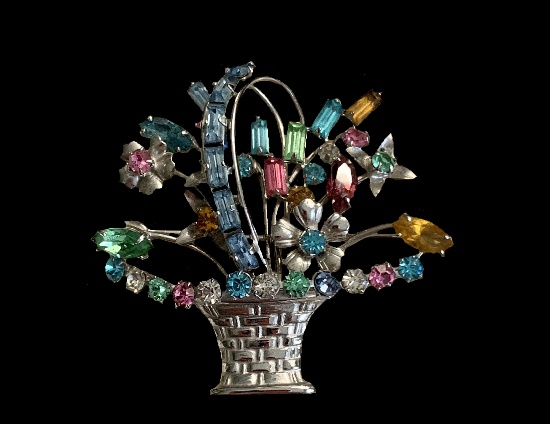 Carl Art vintage costume jewelry
Providence, Rhode Island based jewelry company Carl Art Inc. was founded by two partners – Carl Schraysshuen and Arthur Loercher. Founded in 1936, the company ceased to exist in 1976. A native of Germany, Carl was a hero of the First World War, and was seriously injured. He was a very honest, reliable and pedantic person. It was Carl who invented the very popular twist-o-flex technology for bracelets that is still used today. However, the patent for the invention belongs to Speidel company, where he worked after moving to the United States. Not receiving a penny for the invention, he and his American friend Arthur opened their own jewelry workshop, moreover, next to the Speidel building.
The German emigrant Carl was very tall and large, and the American businessman Arthur was short, but there was complete harmony and mutual understanding between them. Traditionally, they handcrafted floral design jewelry from gold, silver with gold plating, and also used semi-precious stones. Making jewelry under their own brand, they marked them with an arrow through CA, and 1/20 12K G.F., or sterling. Noteworthy, Carl Art Inc. created jewelry for other companies as well.
After Carl’s death in 1953, Arthur sold half of the company.
Characterized by integrity and purity of design, timeless and rare, Carl-Art jewelry is highly collectible.
END_OF_DOCUMENT_TOKEN_TO_BE_REPLACED 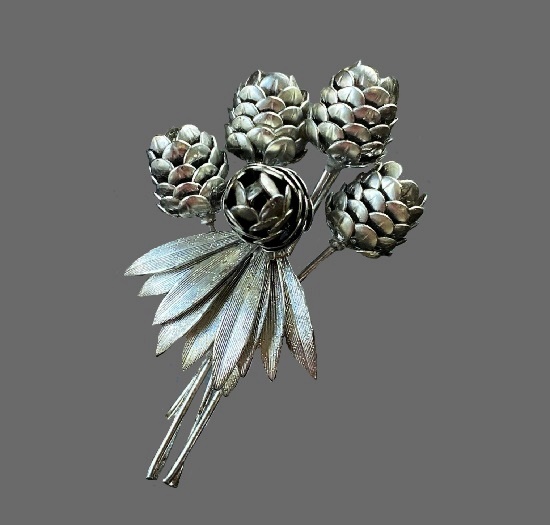 Mr. John vintage costume jewelry
The history of the company Mr. John Inc. began in New York in 1948 and ended exactly forty years later, in 1988. Born John Pico Harberger on March 14, 1902 in Munich, the son of a dressmaker, he received a versatile education, however, not related to jewelry or fashion design. As a teenager, he studied medicine at the University of Lucerne, Germany, and then studied art at the Sorbonne, France. At the age of 17, he immigrated to the United States with his mother. Madame Laurel taught her son a lot and actually introduced him to the world of fashion. The undoubted talent of an artist and designer, exquisite taste and craftsmanship allowed him to found his own company for the production of hats “Mr. John, Inc.”, New York, in 1948. Noteworthy, helping his mother, he made hats decorated with jewels long before the official registration of his own company.
Originally, brooches and pins with a shimmery brilliance were part of the hat design. Also, Mr. John made men’s cufflinks from metal alloy, silver and gold. Traditionally, the stylized markings “Mr. John” and “Sterling” were on the clasp of such cufflinks. Traditionally unmarked, his superbly crafted costume jewelry had original paper tags and was sold in boxes. Today, these jewelry pieces are extremely rare and have a high collection value.
The company ceased to exist in 1989, and John P. John died on 25 June 1993 in his apartment in Manhattan.
END_OF_DOCUMENT_TOKEN_TO_BE_REPLACED 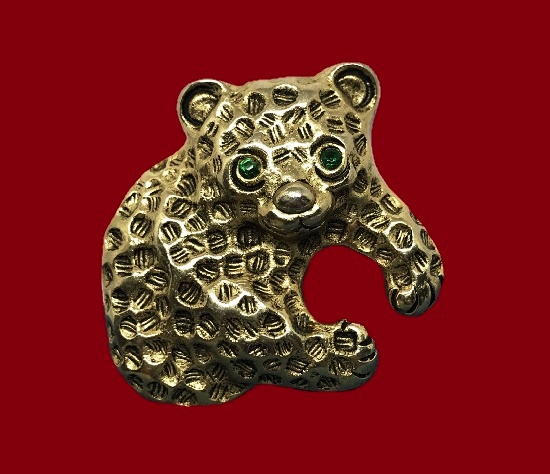 L’Oreal Paris vintage costume jewelry
Founded in 1909, a perfume and cosmetics company L’Oréal is a world leader in the beauty industry. L’Oreal bijouterie appeared in the 1970s, when the company was headed by the founder’s daughter, Liliane Bettencourt. Having taken over the company at the age of 35, thanks to her business intuition, she provided the company with the world leadership in the cosmetics market. One of the most influential women in the world, philanthropist and socialite, Liliane was a jewelry lover herself.
In fact, most big perfume and cosmetics companies created costume jewelry. The trend of cosmetic companies to create costume jewelry appeared in the middle of 20th century. Perhaps, thanks to the fashion icon Coco Chanel, who convinced the women that bijouterie was more important than expensive jewelry. Traditionally, advertising posters for branded cosmetics include jewelry with the brand’s logos. This idea became especially popular in the 1970s, when the brand’s decorations shone along with cosmetics sold in brand boutiques. Undoubtedly, regular customers were happy to receive a branded lapel pin or a badge as a bonus.
Many jewelry designers collaborated with L’Oreal, and one of them was Arthur Bertrand. Noteworthy, L’Oreal had its own jewelry companies, advertising the brand, among more than two thousand trademarks registered by L’Oreal. In particular, “Color of Hope” jewelry trademark (from 2005 to 2012), and “Azzaro” (from 2014).
END_OF_DOCUMENT_TOKEN_TO_BE_REPLACED 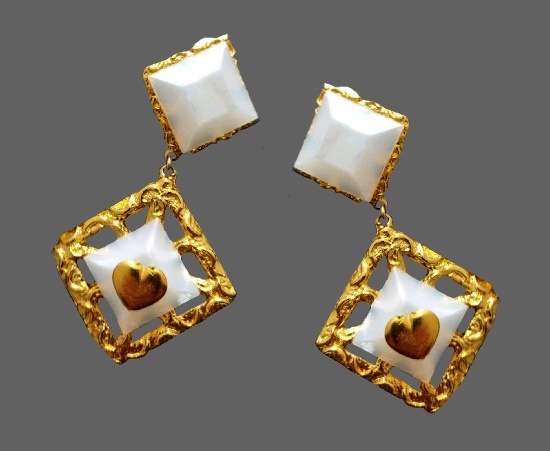 Signed Cereve vintage costume jewelry
The 1980s were an exciting era and a boom in haute couture jewelry, reflecting the individual taste and style of its owner. Excessiveness was typical for clothes, hairstyles, and makeup of the 80s. It expressed itself in everything: bright cosmetics, voluminous hairstyles, and of course, jewelry. Women expressed images of wealth and success with haute couture statement gold tone jewelry. In addition, French jewelry was an indispensable part of the fashion shows of the most famous French designers, such as Christian Dior, Christian Lacroix, Yves Saint Laurent and others. Many jewelers of that time worked for fashion designers, creating jewelry under their name. However, there were also jewelers who labeled products under their own name or under the name of the boutique where they sold their works.
Parisian workshop Cereve created jewelry for no more than two decades, in the 1970s and 1980s. Sold on the original black velvet card “Cereve Bijoux France”, each piece had Cereve marking. The masters of this brand mainly made massive Etruscan-style earrings using Gripoix glass and “crumpled gold”. Handcrafted in limited editions, each piece is unique, and even the earrings in the same pair are slightly different.
By the way, Ce rêve means “that dream” in English.
END_OF_DOCUMENT_TOKEN_TO_BE_REPLACED